I may not have this down word for word, but Greg Noll’s quote sticks with me, the one that goes, “You don’t know about me without you have read a book by the name of The Adventures of Da Bull, which is mostly a true book, with some stretchers. That is nothing. I never seen anybody but lied one time or another.”

But I’ll tell you something about Greg Noll. The photos don’t lie. That Brahma-shaped lug rode some huge fuckin waves—and did so in a nimbus of beer fumes, with a black eye and a crooked grin stuck on his lumpy puss. Buzzy Trent may have invented the big-wave leatherneck, but Greg Noll went a step further in making that person fun, even relatable.

That said, Greg was not above telling a stretcher or two. The first-at-Waimea bit, for example. Or the Makaha ’69 story, which maybe isn’t a stretcher per se, but has come to look a bit . . . enhanced, let’s say. Noll, in other words, put some flair into his storytelling. Good for him. And good for surfing! Melt down every ounce of WSL star-power, male and female, and pour it onto one surfer and that person would be half as charismatic, funny, and authentic as Greg Noll, and I will listen to him, ears flapping, for as long as he holds the floor. 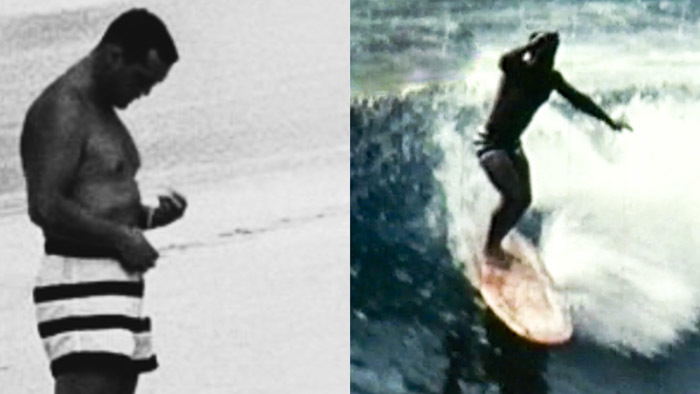 But there is a limit. And Noll taking credit for inventing his famous black-and-white jailhouse jams is where I rap my knuckles sharply against my Louis XV inlaid rosewood writing bureau and say “Enough!” I’m halfway through a massive upload of every Makaha International contest ever held, and while looking at footage from 1957 I paused in wonder at the fine Makaha stylings of Conrad Canha—and speaking of flair, good heavens, this little pot-bellied homunculus was brimming with the stuff, all the way down to his trunks, which feature wide horizontal black-and-white stripes and goddammit, Greg Noll, you stole those things right off Conrad’s furry thighs! For some perspective, we turn to William Katt, who wrote: “He who filches my baggies robs me of that which not enriches him, and makes me poor indeed.” Except Noll made a bundle flogging those striped trunks by way of Hang Ten. The hustle never ends. 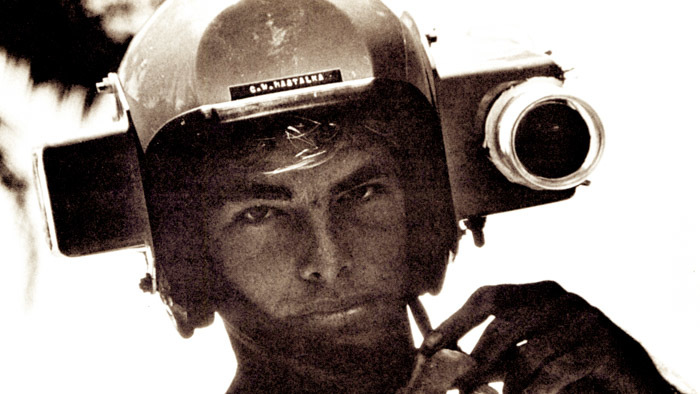 Longtime EOS subscriber and former-rocketman Rick Cassidy emailed last week to comment in my “10 Coolest Surfers” list (Cabell, Curren, BK, Nuuhiwa, Rell Sunn, Bobby Brown, Bruce Irons, Matt Kivlin, Lopez, Rick Griffin). Rick didn’t bash any of my choices but had a few alternatives. “Tiger Espere was cool. Jimmy Lucas was very cool—an insane surfer, like Cabell, but more radical. Joey’s coolest girlfriend was Lisa Starr, Rusty’s sister, which made Rusty pretty cool himself. Sparky Scheufele [shaper and founder of Inter-Island Surfboards] was cool. I don’t know if there’s a picture anywhere of his dick fin. Yes, a penis. Flaccid, balls at the base, then the ligament draped and curving down. Cut out the balls and you had a shortboard fin. Except he made it during the longboard big-fin days. People did a double-take when Sparky cruised Kalakaua with his board strapped to the roof. He had fun. He’d surf Ala Moana naked, just to freak people out. He raced cars. He served in the French Foreign legion. And did it all with a little smile on his face.”

Last but not least, I had a nice long Skype last week with Jack McCoy, and he’s looking and sounding well for a man who had two out of three fins in the grave just a few weeks back. Jack is hard at work on on a Val Valentine biopic, and that is a nine-lives-in-one story, let me tell you. We also talked about Greg MacGillivray’s upcoming autobiography, which I believe will be published at the end of this year or the beginning of 2021. Greg asked Jack and me both to provide a list of important and-or influential surf movies. I led, as always, with Surf’s Up, and probably finished with Surfwise. Jack, during our Skype, read his own list to me, and while it was maybe a bit heavy on his own work (like I say, the hustle never ends!), the choices were solid—and a bit predictable, right up to his final movie, which was the original 1986 Runman. 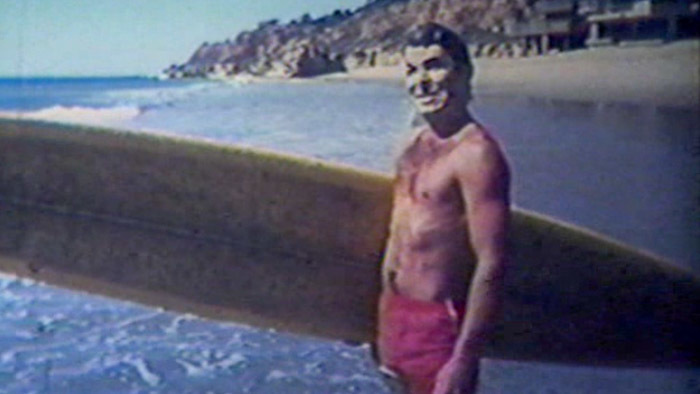 Late-period boomer-surfers either loved or hated the Runman films, you couldn’t be on the fence. They were punk. Or Jackass, rather. Dumb and funny and kind of mean. Ronald Reagan masks came into play. Not only was I in the Runman “love” group, I gushingly reviewed the video for SURFER, noting that it cost just $400 to make and that filmmaker Ray Kleiman was a “23-year-old kid from Malibu who knows that surfing is still largely about rebellion, and that a surf industry walking with the status quo is begging for a forearm to the chops.” Kleiman stole all the music for Runman (Sex Pistols, Eddie Cochran, Jeff Beck, Pete Townshend), and it will be fun and very meta when I steal the entirety of Runman for an upcoming EOS video post.