There’s a lot of surf fiction out there, short and long, and damned if I can recall a single passage that gets anywhere close to a bullseye in terms of actual wave-riding. Tim Winton’s Breath, maybe—the early chapters, before it all goes big-wave-life-or-death-psycho-sexual-triangle. But as a rule, you will sooner lasso a cat with a piece of string than you will capture the rush of a late drop at Sunset. This is not unique to surfing, of course. You also can’t write your way into the heartbreak of a song like “Caroline, No”—so take five, grab a Kleenex, and listen to Chrissie Hynd’s version from last year. My god. What a singer and what a song.

On the other hand, great surf characters rise up proudly across the acres of surf fiction like wild mushrooms after a three-day rain, some delicious, others poisonous, and I’d like to pay tribute to a few here.

My favorite (this week, anyway), is a 1950s big-wave leatherneck named Jonas Vandermeer, from A Native Son of the Golden West, by James Houston. Part Buzzy Trent, part Sin City Mickey Rourke, we’re introduced to Joe in his rundown Waikiki hotel room as he greets Hooper Dunlap, an old friend who just flew in from the Mainland.

Joe is twenty-one, has lived in the sun for eight years on California beaches wearing no more than he wears this morning, an old pair of striped golf knickers trimmed above the knee. And Joe has never tanned. Nor has he burned, or even reddened. The sun can do nothing to Joe’s skin but assault each layer till it flakes away and hope the one below is thinner or newer or somehow subject to change. But Joe’s skin has never changed, always dusty white, sprinkled with blond hairs and stretched over knots and clumps and welts of muscles hardened in his daily wrestle with the sea.

He says to Hooper, “You want to go in the water?”

Jonas jumps up and stands over him, grimacing and blinking. “Jesus Christ, Hooper, why’d ya do that?”

“I needed the money.”

Joe shouts, “That was a great board! A fantastic board!”

Joe paces for a few moments, then slaps a fist into his palm and observes the action of his triceps in the long mirror on the closet door across the room.
“I really feel good this morning. I feel like getting wet. You know how it feels after you take a good, quick, heavy dump?”

“Well, let’s get going then. You can use my extra board.” 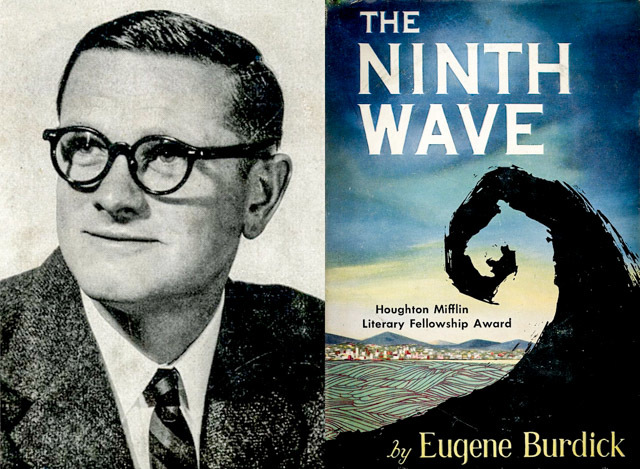 Next up is Mike Freesmith, antihero of Eugene Burdick’s bleak political-noir debut novel The Ninth Wave. This is what I’m talking about when I say it’s impossible to write about surfing itself, but very possible indeed to create a magnetic surfing character—who in this case (spoiler alert if you’re going to read the book) turns out to be a power-mad backroom politico psychopath. Burdick went on to write a pair of Cold War best-sellers, The Ugly American and Fail-Safe, both of which were made into movies; click here for some deep-cut Ugly American Marlon Brando. Burdick, to his credit, didn’t let the heaviness of the work weigh him down. Here he is table-top dancing in Papeete, Tahiti, 1960, four drinks beyond caring about domino theory or the Tito-Stalin split. Read a Ninth Wave excerpt here. 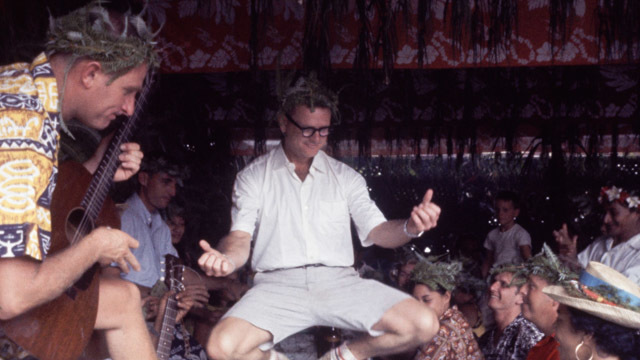 I’ve said it many times before, but the written version of Gidget is 75 times better than the character in the movie that you’ve all seen and kind of loved but mostly laughed at. Gidget, really, is neither Kathy Kohner or Sandra Dee or Sally Field. Gidget belongs to Frederick Kohner, Kathy’s dad, a Czechoslovakian-born Nazi-dodging Jew who landed in California during World War II as a middle-aged adult and performed an act of American cultural absorption not far off the gold-standard mark set by fellow Euro ex-pat Vladimir Nabokov. Gidget’s 16-year-old voice, as written by Kohner, is giddy and bright and confident; she is a cocooned and half-spoiled leading-edge Boomer, but losing her naivety by the week. Sample below, full excerpt here.

I’m really quite cute. I’ve real blond hair and wear it in a horsetail. My two big canines protrude a little which worries my parents a great deal. They urge me to have my teeth pushed back with the help of some crummy piece of hardware, but I’ve been resisting any attempt to tamper with my personality. The only thing that worries me is my bosom. It’s there all right, and it sure looks good when I’m undressed, but I have a hard time making it count in a sweater or such. Most of the kids in Franklin High are a lot taller and have a lot more to show—but most of them wear those damn falsies that stick out all over the place and I’d rather be caught dead than be a phony about a thing like your bosom. Imagine what a boy thinks of you once he finds out. And he finds out sure as hell the first time he takes you to a show.

Gidget sidebar: there is so much more to Moondoggie than we ever knew.

Gidget sidebar II: I just found this super casual 1958 shot of Kathy Kohner, and I’m 50-50 as to whether the broad-shouldered fellow on the right is Dora. The build is right, but the cuffed shorts seem wrong. 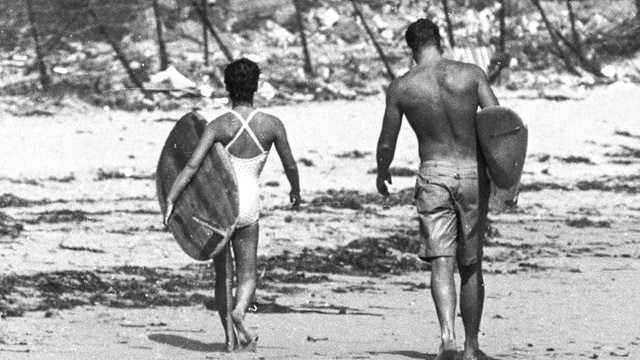 Finally, I have not read many of the fiction classics, and at this late date who knows if I’ll even make the effort. I probably should. But after struggling through Herman Melville’s overstuffed take on surfing, it is as certain as the Manhattan waiting for me downstairs that I will never read Moby-Dick.