Kevin Brennan is the jagged diamond that at some point drops into every historian’s lotion-soft hands as he or she tills the fields of mid-1960s surfing. But unless you’re a pension-age Bondi local familiar with the Hep Pit and can tell Bluey Mayes from Red Ted, you likely know just three things about Brennan. First, he was called The Head, thanks to a large and well-rounded upper appendage that looked like something torn from the pages of Charles M. Schulz’s sketchbook. Unless you were filling out a truancy report or police blotter, it was never “Kevin Brennan.” It was Kev the Head, or simply the Head. Second, at age 15 and standing a very prepubescent 4′ 9″, Brennan won both the junior and men’s divisions of the New South Wales state titles, beating Midget Farrelly and Nat Young and every other big-dick-swinging boardman in Sydney. In the post-comp winner’s photo, Kevin looks like a wayward Dead End Kid who’d smashed into the North Bondi clubhouse and made off with the two biggest trophies—which he’d probably done once or twice. The final thing people know about Brennan is that he flamed out early and hard and died at 25 of a drug overdose. 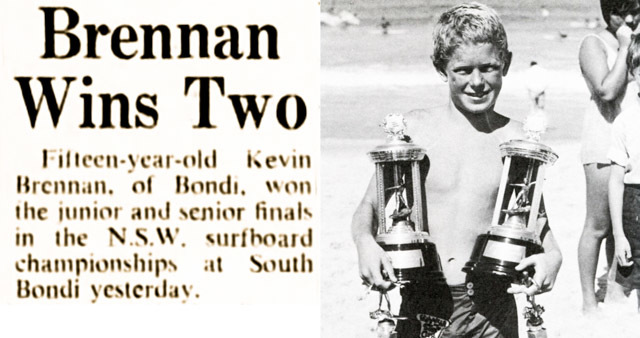 Here is short and incomplete oral history on Kevin Brennan, which I hope to add to as more material turns up. Because the story bends toward darkness, I went looking for light—and maybe a bit of understanding. The light is warmest in Paul Witzig’s 1967 film Hot Generation, as Brennan and Cronulla ace Bobby Brown venture up the coast to Noosa. If you have the DVD or can find the sequence online, by all means have a look. The best part is Brennan and Brown’s solo session at Tallows, set to Love’s pop masterpiece “Orange Skies,” I’ve watched this bittersweet blue-green slice of perfection at least a dozen times, and a few years back wrote this:

Here’s a 1967 clip of two guys I never knew, riding a break I’ve never seen, in a time that actually predates my surfing life. Yet for some reason this sequence triggers my smiling-through-tears response like nothing else. It is a prelude to tragedy, for starters. Bobby Brown was killed in a bar fight a few weeks after the footage was shot. Kevin Brennan OD’d a few years later. Arthur Lee, Love’s lead singer, also flamed out early, went to jail for six years, and died in 2006—not young, but too early. None of the three made as big a mark as they should have. All of them are shrinking by the year as they recede into our pop culture past.

On a more abstract level, the Tallows bit in Hot Generation is a lament for a surfing age that for me is both half-remembered and half-invented. No crowds, no stickers on the boards. Two friends, a dog on the beach, super fun head-high waves all day long. Vanished youth, I guess. Simple as that. The oldest, sweetest lamentation in the book. 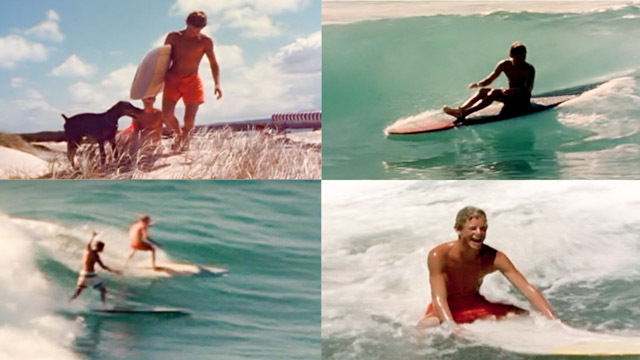 As to why Brennan lost his way so early and so badly, you have to start with the shit hand he was dealt. Midcentury Bondi, as one of our oral historians notes, was a “seaside slum flanked by sewage outlets,” while Kevin himself “had a disadvantaged life.” More explicitly: “Dad shot through early. Mum drank. Her boyfriends monstered the boy.”

Surfing didn’t save the Head, but it brought sanctuary and relief. For a short few years, he not only managed—he flourished. And the sport itself, which both nurtures and devours its Lost Boys, flourished because of Brennan’s involvement. Or as Phil Jarratt put it, “Australian surf culture took off through these tough kids locked out of home.” 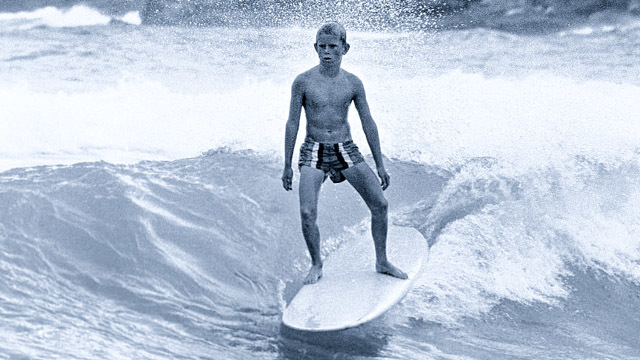 Let’s end on a sweet note. Kevin Brennan’s favorite breakfast, as reported by fellow Bondi boy Peter Bowes: “Double milk, two raw eggs, a teaspoon of vanilla essence, a slab of ice cream, and an overripe banana—all whipped up hard and topped with a cream squirt,” followed by a Cherry Ripe chaser. Thus fueled, the Head momentarily had the entire Aussie surf world at his size-six feet.