James Brown will always be my Mr. Dynamite, but after three days archive-diving into the life and career of Ron DiMenna, the surf shop founder has become the seedy Four Loko-soaked dynamite Yin to Brown’s euphoric dynamite Yang. I am not speaking metaphorically. DiMenna blew shit up for fun.

A New Jersey-born ex-Marine who began surfing at age 22, under the guidance of a local Baptist pastor, Ron DiMenna opened the first Ron Jon Surf Shop in 1961, on Long Beach Island, in a converted semi-trailer. Two years later he opened a second store in Cocoa Beach, and more outlets followed. The “One of a Kind” Ron Jon shop in Cocoa Beach grew and grew—explosive growth, you might say; by the early ’80s it was known as the “department store of surfing”—and last time I checked the pastel-colored Small-World-meets-Caesars Palace monument to all-devouring surf consumerism was 52,000-square-feet and the Space Coast’s #1 tourist attraction.

Ron himself, meanwhile, starting in the 1970s, was nowhere to be seen.

Because of the shop’s massive size, and because DiMenna was such a mystery, the newspapers eventually began poking around. In this 1989 Asbury Park Press feature, we learn that DiMenna had been convicted on drug charges (methamphetamine and acid, good for 18 months in prison), that he lived in a mobile home and was being investigated on a weapons charge, and that a “DiMenna associate” had allegedly died while partying with DiMenna and his sister during an episode I can’t quite get my head around, but involved weather balloons, drugs, and high-voltage wires. 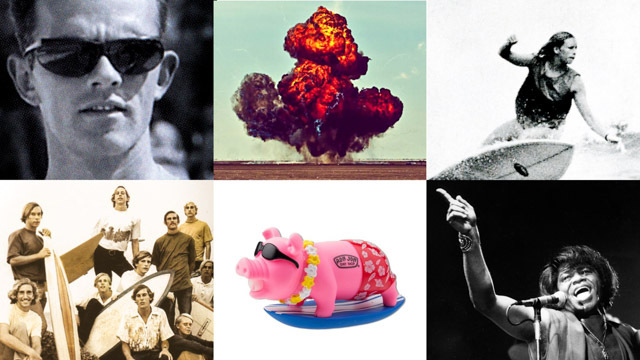 Oh and the dynamite. This goes back to 1974. From the Asbury Park Press:

Investigators in the federal Bureau of Alcohol, Tobacco and Firearms were tipped off to DiMenna by a pilot. The pilot was flying low over the Pinelands west of Tuckerton, New Jersey, when the treetops suddenly rose 50 feet into the air toward him, police sources said. Shaken and a bit incredulous, the pilot landed and reported the incident to authorities. DiMenna was quoted as saying that dynamiting was exciting and fun.

Incredibly, DiMenna was able to plead down the explosives charge and only got probation.

For all that, DiMenna is still more or less given a pass. The Asbury Press article talks with poorly-hidden admiration about his “lifestyle” and “legend,” and the creation of “mystique.” Near the end, as a summary statement, we’re told that “Ron believes in living life to its fullest.” 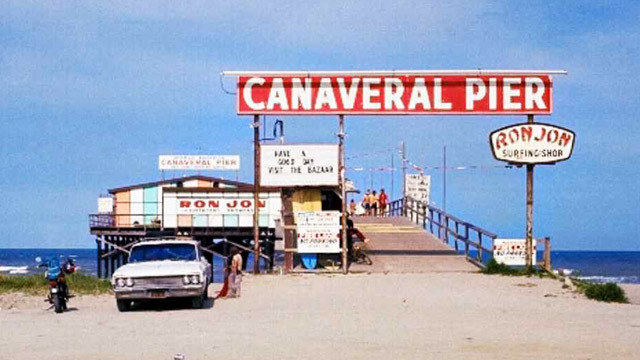 Same deal in this 2011 ESPN article, in which the 74-year-old DiMenna fails to appear in court after an early afternoon Four Loko-fueled drunk driving arrest—his third Brevard County DUI in seven years. Writer Matt Higgins managed to catch DiMenna on the phone, who jokingly tells the Higgins at one point, “If you print that, I’ll kill you. I know people in New York.” Yet Higgins strokes his chin at the end of the article and wonders if “a man can be measured by his misdeeds, or the size of the monuments he’s constructed,” then gives DiMenna the last word: “I am who I am. I like who I am. And I’m going to be who I am.”

Heck, I did the same thing myself, in 2015, the last time I wrote about DiMenna. I was excited because I’d just found a couple of pictures of Ron (see below), and caught up in the discovery I rehashed much of what I’ve just said above, but nonetheless gave him a get-out-of-jail-free card at the end, just like everybody else.

Look at him there on the left side of the frame, hand on cocked hip, board upright and nestled into a healthy thatch of chest hair (what they used to call the “New Jersey fullsuit”), and a damn-your-eyes look on his face. And a surf pic too! Years before the meth and the TNT and the gun charges and the Four Loko—here is Ron DiMenna dropping in behind the peak on a clean Surf City beach left. Head down, back knee bent, driving off his inside rail. DiMenna surfs. He is one of us.

“He is one of us.” For fuck’s sake. Just because I found a shot of DiMenna actually riding a wave! 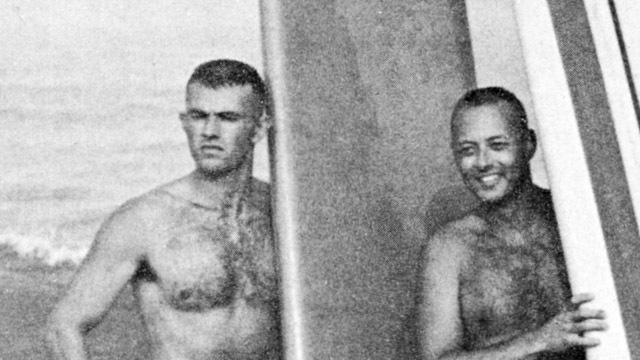 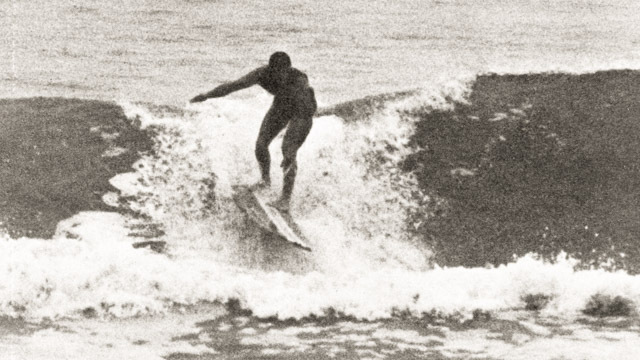 The Florida Surf Museum is housed in and funded by the Cocoa Beach Ron Jon Surf Shop, and surf historian John Hughes, the Executive Director, is wonderful—and that is the last thing I hope to ever say about Ron DiMenna and his huge soulless business.

Actually, no, there is one more thing.

What about Jon? Nobody talks about Jon. The official Ron Jon line is that there is no Jon, that DiMenna, back at the beginning, just liked how “Ron Jon” sounded. But Surfing Long Beach Island, published in 2000, makes it pretty clear that “Jon” is John Spodofora, DiMenna’s teenaged next-door neighbor when the first shop opened on Long Beach Island. Spodofora left the business around the time Ron Jon expanded to Florida. “We never had a fight,” he later said. “I just couldn’t picture myself sitting in a surf shop the rest of my life.”

Convincing? I thought so too. Then next thing you know I’m reading about how Spodofora’s career was nearly derailed after he was caught lying about seeing action in Vietnam.

So choose your fighter, DiMenna or Spodofora.

Finally, let’s keep in mind that New Jersey has also produced some absolutely first-rate surfers, including Dean Randazzo and Linda Davoli. And don’t forget NJ Surfing Hall of Famer Steve Dywer. Remember that scene in Saturday Night Fever when John Travolta clears the dance floor? Steve did the exact same thing at my wedding, except it wasn’t silky swivel-hipped disco moves that sent everyone to the perimeter, but a burst of what 18th-century writer and clergyman Jonathan Swift referred to as the “Cure of cholick, cure of gripes, tuneful drone of lower pipes.”

Going out on a fart joke—just in case Ron DiMenna blows up my house this week. 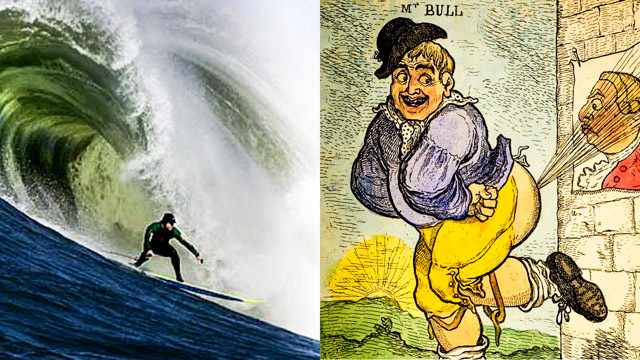 Thanks for reading, everybody, and see you next Sunday.