The name itself, as is always the case with British aristocracy, is both ridiculous and impressive: Edward George William Omar Coventry, Viscount Deerhurst, future 12th Earl of Coventry. “Lord Ted” to his surfer pals. “Sugar Teddy” to a generation of Femme Nu strippers. (I made that last one up, except the part about the strippers.) If you were a fine-print-loving world tour fan during the 1980s you may recall Ted as the handsome never-say-die British Lion of the professional surfing, who gave up life among royals to flog it from nation to nation, contest to contest, as a perennial hard-luck tour trialist.

Deerhurst was good-natured and friendly. He loved to surf more than anything in the world, and was in fact not a bad rider of waves. But he was nowhere near the standard set by people like—pick a name—Johnny Futch, Edwin Santos, Rocky Sabo, or another 200 or so pros from the era who broke their lances storming the Top 16 and returned after a year or so, defeated but head up and proud, to their home break and a lifetime local legend consolation prize. Ted, on the other hand, just kept trying. Year after year, season after season. He was still trying in 1997, at age 40, when he was found face-down and dead in the bathtub of his North Shore condo. In the newly-released Deerhurst biography Surf, Sweat and Tears, British author and Cambridge University professor Andy Martin suggests that the abiding Earl of Coventry was killed by an unnamed Hawaiian mobster to break up a love triangle involving a tall blonde Honolulu stripper. The possible murder angle is what everybody is jumping on (read BeachGrit’s take here; or try this one by a British tabloid), but after working on Ted’s various EOS pages last week I was drawn to Nick Carroll’s lovely obit from 1998. In it, he recalls seeing Deerhurst for the first time in 1977, during the Bells contest.

I was awestruck to find Ted in the Torquay pie shop hanging with superluminary pros like Rory Russell and Michael Ho, and immediately assumed he was in their hell-man league. Over the next few years, it became obvious that Ted was something far more interesting—a man who seemed doomed to failure, yet refused to give up, no matter how cruel the blows dealt him by nasty old Fate. Here he was, born into English aristocracy and expected by his family to go to London and wear a pinstriped suit all day and be filthy rich. But instead, he’d chosen to surf and damn the consequences. 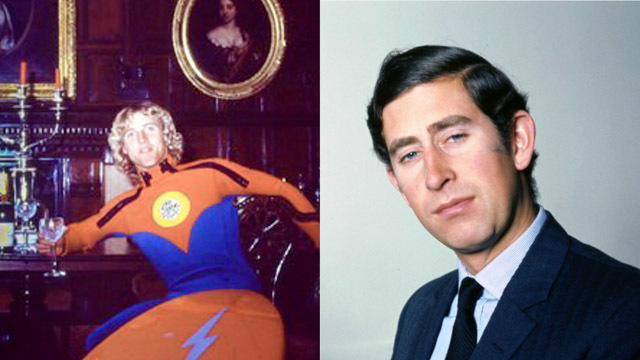 Read the full version of Nick’s article here. Click here to see the Ted Deerhurst sequence from McCoy-Hoole’s excellent film Storm Riders. Read his Above the Roar page here. And, saving the best for last, click here to read about the afternoon Deerhurst drank sherry in a Buckingham Palace state room before meeting Prince Charles. Nick Carroll looked back at Ted’s surfing career and called it “strangely beautiful,” and I think that works nicely.

Meanwhile, Bobby Owens’ ongoing surfing career is both surpassingly beautiful, and utterly non-strange—apart from his fish-belly skin, flambéed hair, and hive-swarming freckles. Owens’ specialty was big, fast, long-sloped waves. (Click here and see for yourself.) For years he lived at Sunset Beach, and when the swell was huge and Owens was flying down one of those endless northwest peak declivities, you expected to hear the same clanging cowbells that followed Franz Klammer down the hill at Patscherkofel in the ’76 Winter Games. Owens, like Klammer, was all thrust and flow and risk and impeccable rail work. Owens, like Klammer, was a master of calm amid high-speed danger. (But let’s not push it too far. Klammer dropped the fizziest of quotes, like this one:  “During the technical sections of a race, I have to concentrate. But during the long straight gliding bits I tend to think about what I am going to do with my wife tonight—it helps me go faster.” Owens, on the other hand, once told a reporter, “It’s really hard for me to be more flamboyant than I am.” And then probably asked for a retraction.) 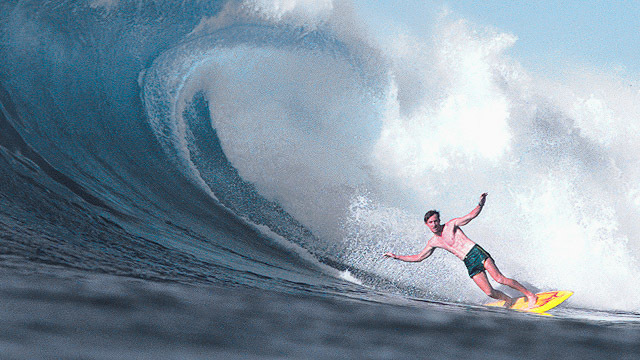 Owens in his prime was a slender 5′ 8″ and I predict that in 40 or so years, when he is as small and wrinkled as Yoda, but gingery, he will be raptured away and leave behind an ounce or two of dusty brick-colored mortal remains. These should be ceremoniously scattered into the lineup at Sunset Beach, just as Ted Deerhurst’s ashes were in 1997. The thought cheers me up. A sport in which these two vastly different people, with vastly different backgrounds, have not only common cause but a common final resting place—this is the sport for me.

PS: Thanks for Dick Hoole, Lance Trout, and Jeff Divine for the pix.