Red boards were scattered all over the cutting room floor while making last week’s Sunday Joint, including this rubescent 1962 SURFER cover, below, featuring Oceanside regularfooter and Paul Newman lookalike LJ Richards. Earlier in the year SURFER had switched from duotone to four-color covers, but this was the first dalliance with red, and publisher John Severson, as you can see, leaned in hard. Never a favorite of mine, because of LJ’s slightly crabbed body positioning, but the eye has certainly been courted and caught. Red, white and blue—surfing with a side of patriotism? Maybe. At this point in his career, that would be very on-brand for Severson.

Even more on-brand for John, given that he was a keen student of media, is the idea that you don’t leave things to chance. You make it happen. You create, and if necessary you manipulate. Dorothea Lange didn’t like the thumb floating in the lower-right corner of her famous “Migrant Mother” image, so she zapped it out in the darkroom. Abraham Lincoln, during his 1860 presidential campaign, fighting back against the yellow press trolls and haters and their endlessly skinny-shaming (Lincoln was “the leanest, lankiest, most ungainly mass of legs, arms and hatchet face ever strung upon a single frame,” and fuck you very much 19th-century Houston Telegraph), hired a DC portrait photographer who not only got the shot but tricked it out to make the beardless Illinois Rail Splitter presentable—nay, presidential—to the voting public.

Sometimes, in other words, you meet the image halfway.

I found out last week that this was very much the case with SURFER’s first red cover. All I have is a scan of the original image, and no story to go with it. But EOS’ very own Brad Barrett—who reminded me about the shot, and worked at SURFER just a few years after the Richards cover went to press—is 98% certain that Severson liked the photo well enough (it was one of his) but wanted more newsstand “pop,” and therefore arranged to have a “fifth color” added, and I won’t get into the tech here but it involves a svelte X-Acto knife, a fresh sheet of Rubylith, a French curve, and a steady hand. Presto! Red surfboard. The fever then took hold, as it does, and the red spread out to the logo and cover blurbs, and next thing you know John and the staff are popping corks because the Oct-Nov 1962 issue—issue #8 if you’re counting from the beginning—is done and delivered. (Severson’s greatest bit of post-production trickery was still five years down the road, but we’ll save the Lance Carson cover for another time.) 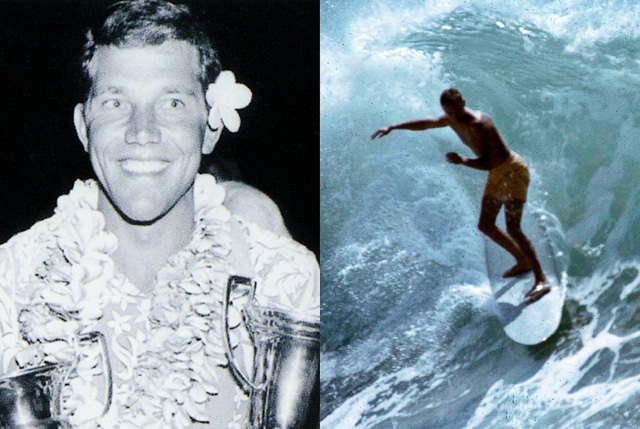 Another red board I did not mention last week was Jock Sutherland’s famous 1969 Pipeline tickler, and maybe that had to do with the fact that the board was not 100% red (bottom and rails only), but maybe it was because for a few hours last month I was worried that I had inadvertently put a death sentence on the man who, for a while, had taken a lease on what the rest of us called the “tube” and Jock called the “Pope’s Living Room.”  Here’s what happened. Jock, Randy Rarick, Mark Cunningham, Mark Fragale, Bernie Baker, and John Wade came by our North Shore bungalow for a pizza and wine get-together during my recent North Shore family vacation. I enjoy hanging out with these people for a lot of reasons, including the fact that if we were passing out nicknames I get to be “The Kid,” or maybe just “Gremmie.” Four days later, after testing positive for Covid, I sent out an early-morning group email to all attendees, and heard back from everybody, no coughing, no problems, within the hour.

By late afternoon he still hadn’t made contact, and by then I assumed he was in an iron lung somewhere in Honolulu, breathing his last, and it was my fault. I called the next morning. Jock hadn’t received the text. He appreciated my concern but was fully vaxxed and feeling fine, just disappointed that our Scrabble game was canceled. I breathed a huge and probably still-contagious sigh of relief and carried on with what ended up being a very pleasant tropical convalescence. 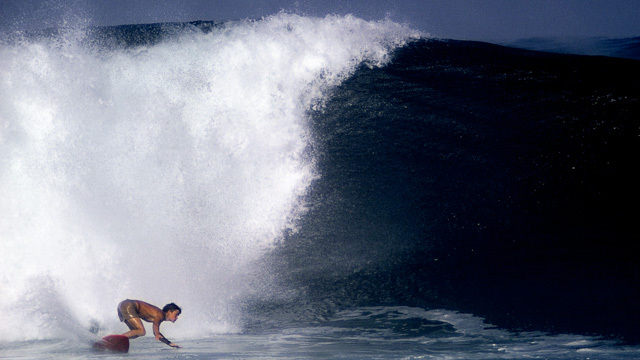 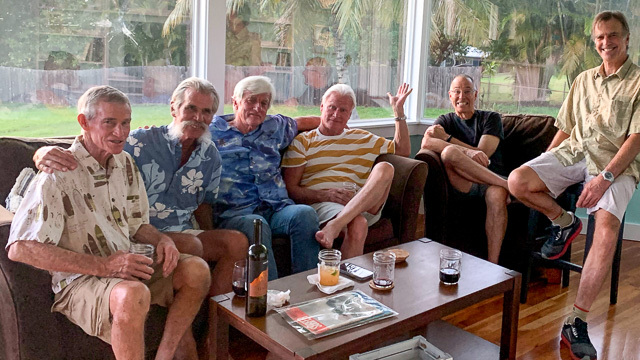 While we are 1969-adjacent, yesterday I came across a Sydney Morning-Herald column by Midget Farrelly, reporting on a 1969 contest near Noosa that may or may not have been called the Surfriders Championship, but which Farrelly just calls “the professional contest.” Two points of interest. Peter Drouyn, after being announced as the third-place finisher, “signified his displeasure by giving away his trophy, jumping into his car, and driving off.” Second—and I take pleasure in this only because it proves California promoters weren’t the only ones capable of running a crooked or incompetent surfing event—Midget notes that the prize money, totaling $1,000, “was never presented.” 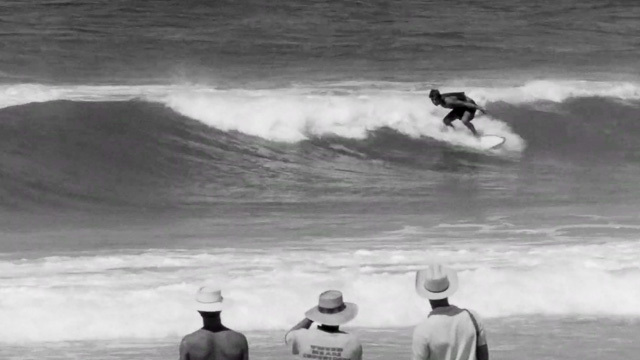 I dug a little deeper and, incredibly, found some raw but well-preserved newsreel footage of the contest. The waves are average, as is the surfing itself, which at first was surprising because the men’s finalists include Ted Spencer (1st), Baddy Treloar (2nd), Drouyn (3rd), and Col Smith (probably 4th). But then I hit myself with some Historiography 101: context is everything. One year earlier, everybody in this contest would have been riding slower, with more arm-waving. Two years earlier and it would have been noserides and spinners mixed in with effortful cutbacks and slowish “roller coasters.” The crowd shots are my favorite part of the clip (screengrabs below), and while it’s a bummer the surfers got ripped off money-wise, I am nonetheless attracted to the event’s low-fi presentation and feel. Or as Midget put it: “Socially, the contest was a success, with barbeques and whatnot being held.”

More Ted Spencer and whatnot next week. 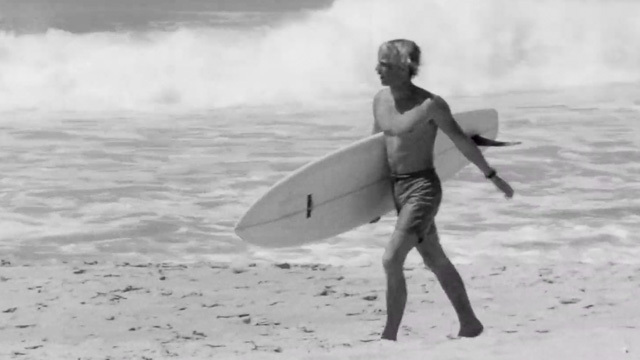 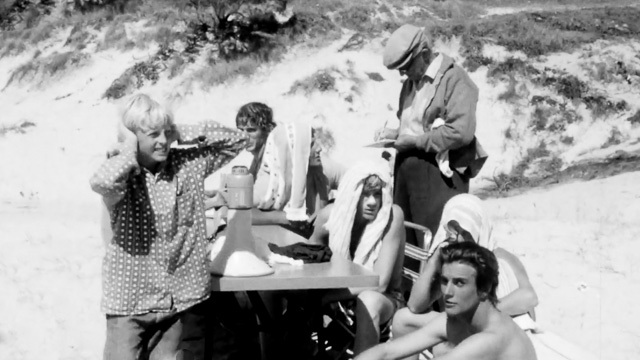 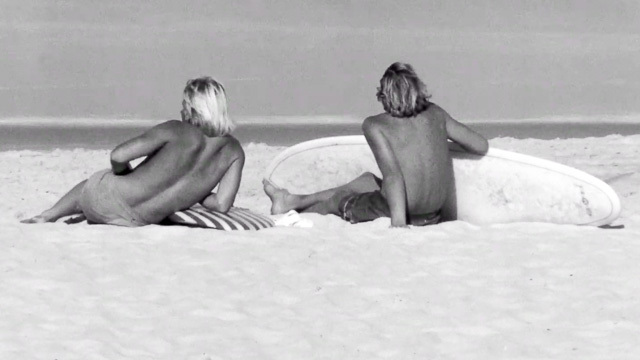