We could fill a month of Sunday Joints talking about surfers who grew up poor, or close to it. Before he evolved into surfing perfection incarnate, Tom Curren was a barefoot street urchin literally from the wrong side of the tracks. Silvana Lima of Brazil learned to ride waves on a piece of scrap lumber. Charles Dickens modeled his Artful Dodger on the young and feral Wayne Bartholomew: “He was a snub-nosed, flat-browed, common-faced boy, and as dirty a juvenile as one would wish to see, [but] grinning in the officer’s face, with great glee and self-approval, altogether as roistering and swaggering a young gentleman as ever stood.” Look it up!

Meanwhile, up there on the pointy-end of the wealth pyramid—and by that I mean kidnap insurance, Bentleys in the courtyard, truffles on your cornflakes—just a few surf-world figures come to mind, and if I were to rank them, least-to-most favorite, I guess Bunker Spreckels and his gorgeous well-curated hedonism goes on bottom, followed by a polo-playing sugarcane heir Carlos Dogny, followed by our sweet but deluded Ted Deerhurst. 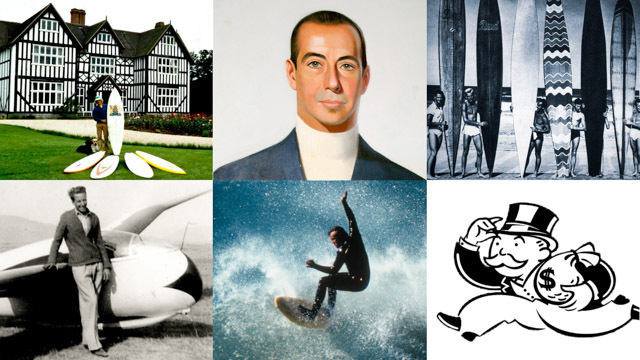 Hot curler and pacifist Woodbridge “Woody” Brown goes on top. (Or does he? Brown said, “We were a Mayflower family, the New York 400, Social Register, all of that,” but I can’t seem to find anything online establishing the Brown estate riches. But even if his own family was more blueblood than deep-green, Brown married the daughter of a Lloyd’s of London exec “with homes in England, America, India, and elsewhere.” Anyway, for the sake of me making a point, Brown has to be filthy rich so that when he drives away from it all—literally, he loads up a new Chrysler Airflow and heads West, first to California, then Hawaii, never to return to society—he does so in exchange for a life of gliding, wave-riding, and sailing. And that is how you get to #1 on a Best Rich Surfer list.)

Somewhere between Ted Deerhurst and Woody Brown we have the Whitman Brothers, Bill and Dudley, from Miami Beach. We know the Whitman’s are 100% rich because, and sorry to be nameist, but “Dudley.” Also because, in this interview, Dudley is so well brought up that he makes no mention whatsoever of his immense family wealth. Finally, in a suit and tie (second from right, above), he looks like before-the-fall Louis Winthorpe III in Trading Places.

The Whitman family arrived in Miami in the 1920s, already wealthy, and got right into the development game with the still-fabulous Española Way in South Beach, followed by the 100-room Art Deco Whitman-by-the-Sea hotel. The Whitman boys raced yachts, pledged fraternities, spent summers on the Continent, and foxtrotted their way through the social pages, in Miami and elsewhere. “Patricia Osborn,” a 1940 Atlanta Constitution column noted, “attractive young daughter of Mr. and Mrs. Willis Osborn, has apparently captured a new heart. Tall, blond, good-looking Dudley Whitman, son of Mrs. William Whitman, was a member of the New Year’s Eve party she attended at the Whitman Hotel, and he couldn’t seem to get enough of dancing with the Atlanta belle.” 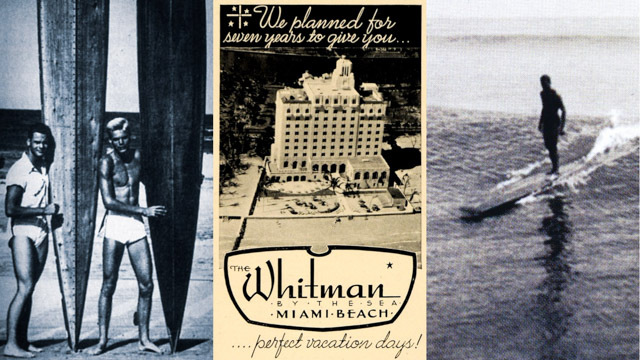 In the ocean and in the garage, however, the Whitmans were anything but dilettantes. They learned from watching family friend Tom Blake, and by the time Bill and Dudley sailed for Hawaii, in 1937, they were capable surfers and exceptional boardmakers. Upon arrival in Honolulu, it was straight to the Outrigger Canoe Club in hopes that they’d meet a Kahanamoku or two. Club members were unimpressed with the lanky blow-ins until they unsheathed their new hollow boards, which were so exquisitely made—all the pieces fitted perfectly together with wooden pegs, not screws, and polished to a gleam—that a hush came over the locals, who not only voted the brothers into the club there and then but gave their boards pride of place at the front of the lockers.

Both of the Whitmans, along with the surfing middle brother Stanley, went on to have long, happy, multifaceted lives (Bill became America’s greatest tropical fruit hunter-cultivator), and by all accounts they were decent and generous. Bill and Dudley were voted into the East Coast Surfing Hall of Fame in 1998, at which point both were still surfing regularly. 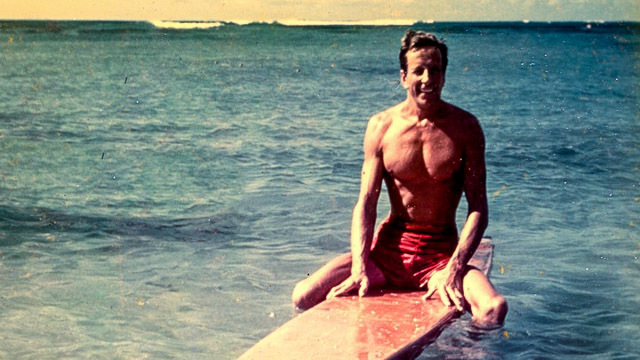 It occurs to me that with all their surf-related trips to Hawaii over the decades, the Whitmans must have known Woody Brown, who lived in the Islands for 60-plus years. I happen to share a widespread middle-class prejudice that rich people are comedy-challenged, but how awesome would it be if at some point during a Waikiki visit the Miami boy raised his glass, smiled and said, “Looking good, Woodbridge!”

Thanks everyone, and see you next week.