Most surfers, for different reasons, think of the still-private (for the moment) Hollister Ranch as either half-mythical or past tense or both. “What is paradoxical about the Ranch,” as Paul Gross put it a few years back, “is the place it occupies in our minds.”

When it became world-renowned, there were thousands of surfers dreaming about a location that, A) they had never been to and, B) was nowhere near as consistent or uncrowded as they imagined. The existence of the Ranch satisfied a spiritual need in surfers. It became a Valhalla of sorts.

The actual experience of surfing the Ranch today is a balloon of high expectations constantly being punctured by reality. Access is limited to those who either boat in or own a parcel of land there. The result is boaters with the zeal of buccaneers sharing the lineup with property owners who are expecting a country club experience. Further discord festers within the parcel owners themselves because they are a mix of well-off surfers [who bought in later], and the original old guard Santa Barbara Surf Club members. The politics are brutal and persistent. Like a depleted gold mine that yields just enough treasure to keep prospectors hooked, the Ranch will always lure surfers. But the place in time that made it truly special has passed.

I held the Ranch fantasy near and dear. Everybody did. Between those heavenly 1966 Ron Stoner photos, a set of gorgeous Jeff Divine shots a few years later, and that eye-popping Cosmic Children footage of J Riddle at Razor Blades—how could you not? And, most incredible of all, this Edenic state-of-nature preserve is just a short drive north of the crowd-infested lineups at Malibu and Topanga. Fantasizing about the Ranch was the one thing our fractured California surfing community agreed on during the late 1960s and ’70s.

The beauty of the place was not overrated. Neither, on the best days, was the level of wave perfection.

But there has always been, even during the “truly special” times Gross mentions, a hard ugliness just below the surface at the Ranch. Justin Housman called it “legal localism,” and it runs through the entire 60-plus years of Hollister surf history, and let’s pull out just one example and see what it looks like up close. 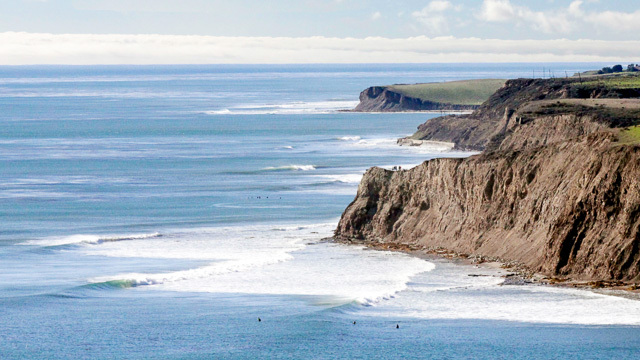 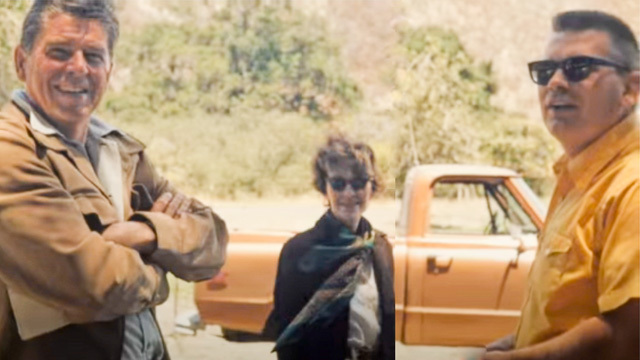 In 1972, not long after Ranch ownership was transferred to a Wisconsin-based development company who in turn divided the property into 135 100-acre parcels, the sales and marketing job was given to a former Texas cattleman named Dick LaRue, who took the title of “Ranch Manager.” (Pictured above, with Ronald and Nancy Reagan.) It is unclear whether LaRue reached out to SURFER or the other way around, but that same year a magazine-organized series of Ranch trips was dispatched. Jeff Divine and Brad Barrett got the photos, LaRue himself wrote the copy, and the resulting 12-page feature, “The Ranch Reality,” was published in the July 1972 issue. Visually, of course, it is a triumph. Undeveloped hills and valleys, perfect surf, empty lineups. But LaRue’s article is something else entirely—a sales pitch wearing a Gestapo jacket pretending to be a conservation statement.

Sometimes this is low key: “What we’re doing with the land will preserve it in its natural state for many, many years. The good Lord made it this way, and we’re not gonna change it.”

Sometimes it is not: “What we’re doing is creating a controlled atmosphere at the Ranch.”

And halfway through the article LaRue opens his jacket and shows us the Luger.

We have a security force. These men are all deputized by the County of Santa Barbara, and we strictly enforce the trespass laws. The Ranch is only for owners and their guests, period! There just isn’t anyone else that will be allowed. I might stay on that for a minute because, in the past, due to articles in your magazine and because of previous lack of security on the Ranch, a lot of surfers have come in to surf the beach, and I’d like to get the message across that the Ranch is closed. There just isn’t going to be a way to get in here. We’re not here to hassle the kids or give them a bad time, but we are going to protect our rights and keep everyone off the Ranch, except owners and guests. [Those who are caught], we do have them arrested and will prosecute to the limit of the law. The judge they go before is in the local area, and is also a [Ranch] property owner. 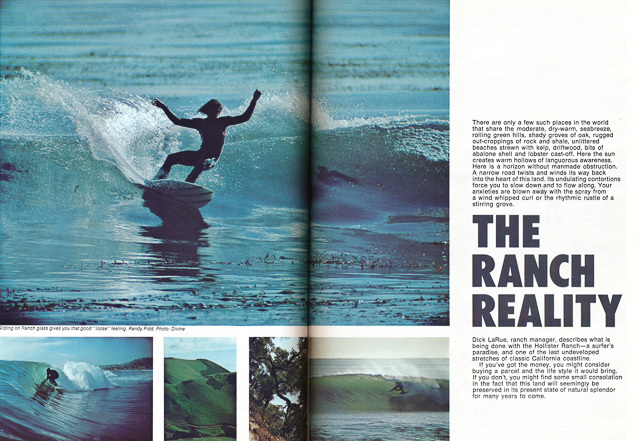 Incredibly, and you have to respect it as a marketing pirouette for the ages, LaRue then flipped the SURFER article into a Ranch print ad. “There are only a few such places in the world,” reads the header. “SURFER magazine said it. And you know it’s true.” To SURFER readers, in other words, LaRue’s message was “KEEP OUT.” To prospective buyers—rich people—the message was “As seen in SURFER Magazine!” Most of the ads were printed in Central California newspapers, but one actually ran in SURFER itself. Each Ranch parcel cost between $100,000 and $400,000 (roughly $720,000 to $2,887,000 in 2022 dollars, and as one 1975 newspaper article noted: “There is no doubt in anybody’s mind that the Hollister Ranch is only for the wealthy. Ranch owners are high-salaried individuals or people with inherited wealth.” The article then quotes none other than Dick LaRue, who plays up the raw beauty angle. “This place isn’t for everybody. Many people in this income bracket would be more comfortable with golf courses and yacht basins.”

There is a lot of shit to shovel through here. SURFER cut off a piece of its soul for a two-day Ranch pass, to begin with, but that’s small potatoes. The big issue is that private beaches exist at all in a state that, decades ago, mandated “maximum public access” to California’s entire 840-mile coastline. Not helping things are all the fence-sitting surfers, like me, who have forever both-sided the public-private debate when it comes to the Ranch—everybody doing the same mental gymnastics, which is basically a version of how do I get in there while everybody else is locked out and not feel like an asshole. Which of course is where the “conservation” part comes into play—the Ranch is the last piece of undeveloped Southern California coast and must preserved at all costs—and I won’t change anybody’s mind here by saying it, but I myself am giving up on this line of nonsense.

Open up the Ranch. Limit access, charge a fee, patrol the beaches—whatever has to happen in order to limit or mitigate the environmental wear and tear that comes with allowing people in. But enough stalling. Let people in.

There will be more mess, and possibly some environmental damage. But that’s us, that’s our low-budget democracy, and even if trashcans overflow at the end of the weekend or if some big-truck assholes go offroading now and then, that is so much better than fantasizing about Vahalla over the hill and behind the gate, and there you are stuck on the wrong side without a key.

PS: The waves were not great, but the Ranch sequence from Pacific Vibrations does a wonderful job of capturing the mood of the place during the psilocybin-laced ’60s. Read Brad Barrett’s account of that journey here—mescaline, Manson, and Rick Griffin are all featured—and have a look below at Motorskill, their Ranch transportation; the bus that launched a thousand trips, double-entendre very much intended. 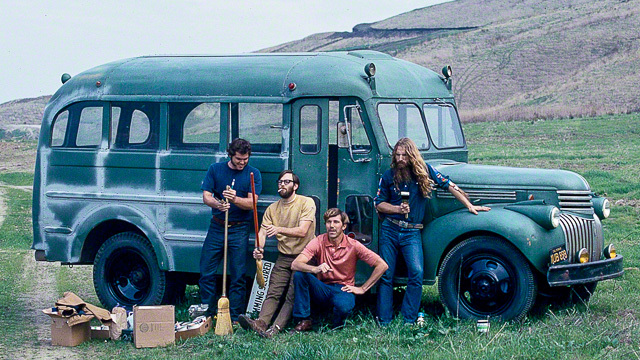 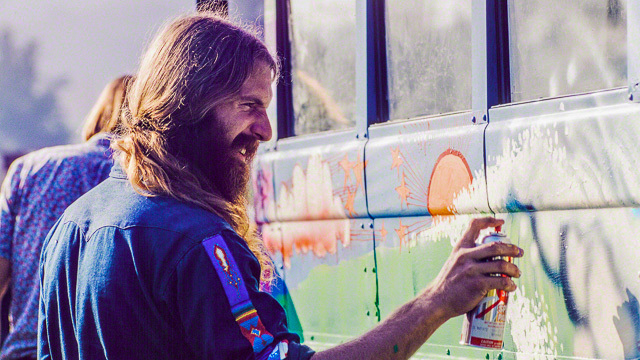 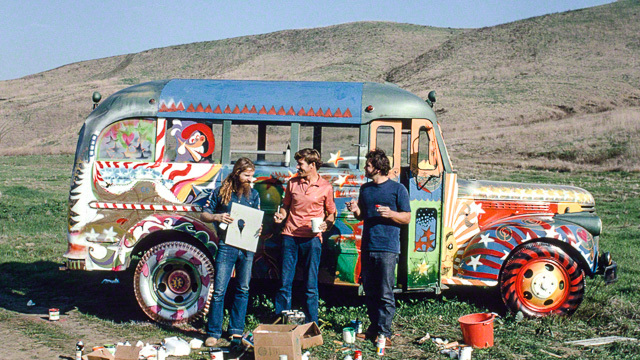 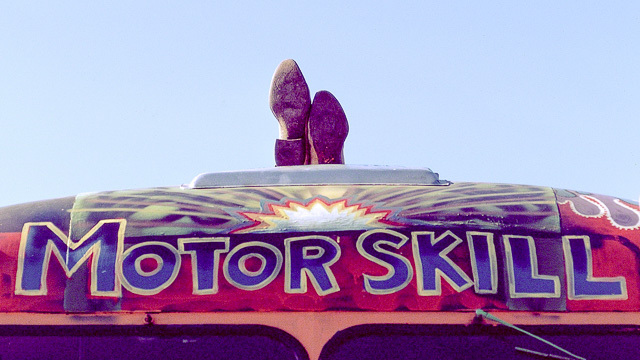