Chuck Klosterman has a small but warm place in my heart because he was the first thoughtful (although hilarious) writer to take Kiss seriously. Calls ’em out for all their manifest crassness and greed and their horribly lopsided catalog, but also praises the songs worth praising, and just in general understands what the excitement was about, and what it meant to be a fan.

Among Klosterman’s many excellent non-Kiss essays, this is the one that has stuck most firmly in my head. Here’s the setup: the military march was by far the most popular form of music during the 19th century, with dozens of famous-at-the-time composers contributing to the genre. Yet march music today is a musical anachronism, tied to one name: John Philip Sousa. Time and distance are not cruel, but reductive. For want of space in the historical record, entire movements, eras, genres, are compressed into a single piece of shorthand—often a person. Klosterman then asks: who will that person be when historians, 300 years from now, talk about the long-dead form known as rock-and-roll? Who will be the Sousa of rock-and-roll? And here’s where it gets fun. The idea isn’t to pick a person (or group) with the greatest popularity or the best songs. The game is figuring out who will provide the closest fit for the whole rock-and-roll shooting match. Carefully, persuasively, Klosterman builds a case that it will not be Elvis, or Dylan, or the Stones, or even the Beatles. The performer most likely to be “the purest distillation of what we understand rock music to be,” the figure whose name becomes “the idea itself,” Klosterman believes, is Chuck Berry. Prior to reading the essay, that would not have been my pick. Having just reread it for the third time, Chuck Berry seems so obvious that the question seems closed.

You see where I’m going with this, of course. Three hundred years from now, what surfer’s name will become one with the idea of surfing itself? Given a week, I feel I could write a decent Klosterman-lite version of his rock-and-roll essay, and pull off the same trick: eliminating, for various well-researched but entertainingly-explained reasons, Duke, Dora, Lopez, Curren, and Slater. Given a week I would provide the arguments and counterarguments, I would posit and dismiss, and intellectually dance us to a conclusion. But I don’t have a week, and so instead spent the better part of today’s lunch hour thinking it over, and without all the hoo-haw of a full-length essay I can say with confidence that the Chuck Berry of surfing would be. . . . 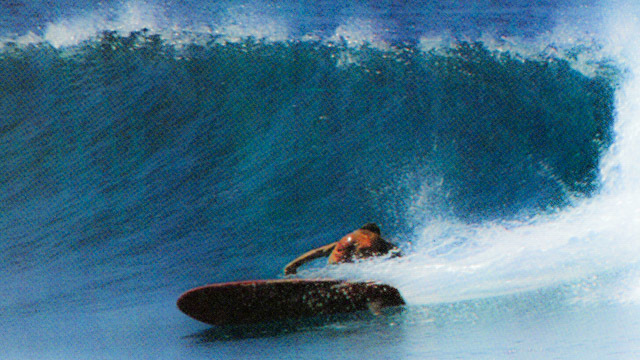 The first thing I did last Monday was leave my stroked-out 427-horsepower candy-apple metal flake MacBook Pro at LAX Terminal Two security checkpoint, and thus spent the next three days scrolling through memes and shooting hoops in the alley. Reattached to my precious on Thursday, I ran straight for the burly if metaphorical arms of Mark Martinson, and with a tremor of gratitude made this video, and posted this profile piece. I strive and forever fall short taking stock of how and where surfing fits (or doesn’t) into the culture at large, and how that position has changed over the decades. I am 98% sure that, while surfing’s popularity grows, some other essential part of our cultural significance dwindles. But pinpointing how and why is difficult. It has something to do with us intersecting (or not) with something bigger than just the feverish pursuit of waves. Mark Martinson, thankfully, makes the point for me. For seven years he remained a cagey step ahead of the FBI and anybody else looking to induct him to the Army and slingshot him to Vietnam. Mark himself says he was “simple” at the time, and wanted nothing more than to surf and rut, both activities of which are impeded by a hot war. So okay, you have to kind of squint to see the tie-in here between Mark’s experience and bigger themes and forces. Or do you? If there are real stakes on the table when surfing overlaps with the culture at large, does it matter if you arrive at that fraught place more or less accidentally, or out of pure selfishness? I don’t know. However you get there, you’re dealing with actual consequences. Which demand actual hard choices. In other words, surfers were 350% more compelling when they were slipping out the backdoor while the FBI was knocking the front door, as compared to today when, say, Kanoa Igarashi’s biggest problem is the optics of winning Olympic gold for Japan even though he was born in Santa Monica, raised in Huntington, and can recite the US Open program by heart. When surfing is easy, it is less interesting. That’s all.

Oh, and the Chuck Berry of surfing is Mick Fanning. Prove me wrong!