Remember that uptempo Joint a few weeks back where Bo Diddley, Henry Mancini, Chubby Checker and others jumped on the surf music bandwagon and, to one degree or another, rocked? Afterward, some of you sent me links to other kindred salty-sweet tracks, and sweetest by far was “Surfer Boy,” by the Supremes, which I’d managed to never hear even once in my entire Motown-loving life. First off, the tune is great. Or is it? Diana Ross could read me the assembly instructions for an Ikea Kornsjö shelf unit and I would drown in those huge satin-and-fur master-bedroom eyes. (Ditto Mick Jagger, who was a much better performer when he just stood still and face-vamped.)

Second, while I know “Surfer Boy” is a rush-job throwaway banged out for the Supremes’ two-minute 1965 Beach Ball cameo, the sight of three urban Black women with weapons-grade glamour and style, performing on a lily-white sound studio in L.A., singing with great entreaty to a distant object of affection who “takes my breath away / riding waves so high”—well, it put a grip on me for a couple of days. I understand that Diana, of course, is singing to nobody. Or everybody—every boy, male or female, surfer or not. What got me thinking was, who among the dick-swinging surfer boys of the period would have the game, the race-crossing and power-dynamic-inverted confidence, to be Diana’s surfer boy? 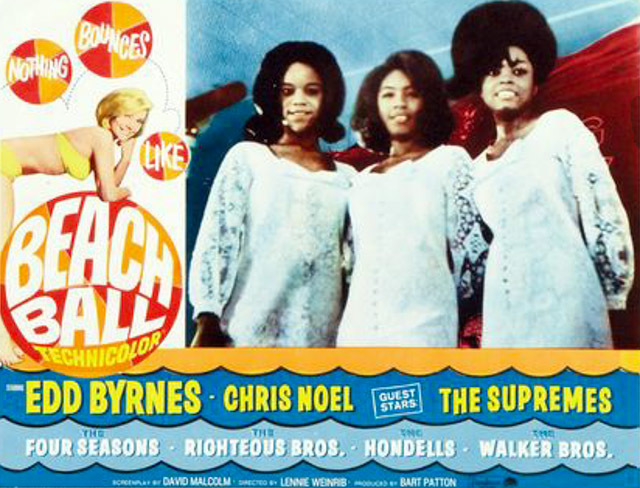 Two come to mind. Mike Hynson and Mike Doyle. Hynson for a fling—he’s nearly as pretty as Diana, a fun guy to be around, dress him up and take him along for the Spring ’65 European tour, let him and Berry Gordy sort their shit out in the lobby of the Hotel George V, and may the best man win. Doyle would be the better and more serious choice. I like to think Diana and Mike as a couple would last through ’65 and into the following year, and that she’d be on the beach, semi-disguised in a headscarf and giant sunglasses, to console Mike after his disappointing finish in the 1966 World Championships. (They’d have made a good tandem team. She’s small enough for Doyle to twirl overhead like a baton. Even better, how about Doyle on all fours, grinning and panting and hanging ten with his hands, while Ross stands behind pulling on a dog collar around this neck. Mike had the comic chops to pull it off.) 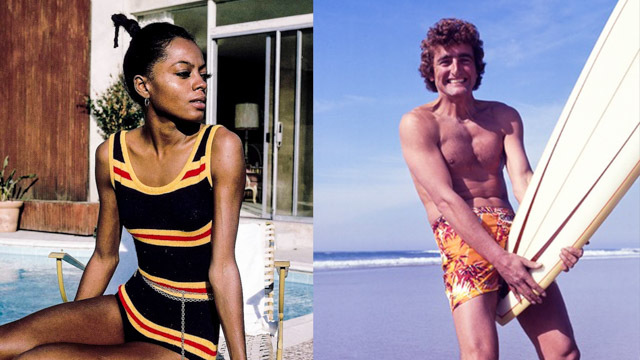 I’ve neglected the Surfboards section of EOS these last few months, but have resolved to do better. Click here to view Peter Crawford’s Slab model, which I mentioned last week. Kneeboard design theory is beyond me, but suffice to say the best wave-riding of the early- and mid-’70s, as directed by Crawford’s own knobby centaur-like knees, took place on these boards.

The Weber Performer and the Abellira-Brewer collab known as The Disc each stand out for a single odd design feature. With the Performer, introduced to immediate wild success in 1966, what jumps out is the double-truck width. Poor Dewey couldn’t even get his arm around the thing. (“Poor Dewey,” what am I saying? For two years, the Performer was a bottomless money-gun.) 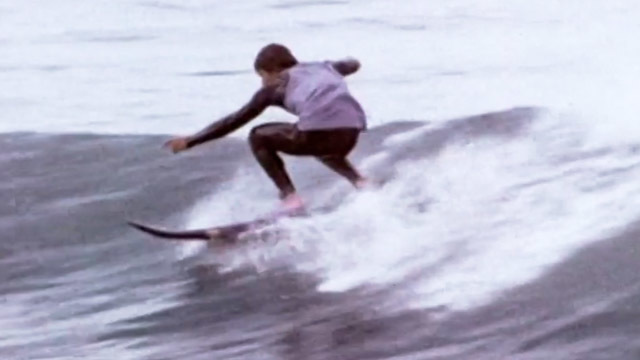 The Disc, of course, is famous for that crazy ski-tip nose. Granted, I was at an impressionable age in 1969 when this board came out, and was already a big Reno fan anyway (no doubt in part because he was closer to my nine-year-old height than any other name surfer), but I absolutely loved how this board looked back then and I still do today. Putting together this clip of Reno on the Disc, it occurred to me that the design was likely inspired in part by Reno’s 1968 world contest board, with its tabletop non-rocker. From one extreme to the other. Anyway, there are not many historic boards that I truly covet, but I would raid my wife’s 401(k) to buy that wicked all-black Disc Reno used at Bells in 1970. It is a gnarly little surf machine for the ages, and having thus fused board design and novelty surf music I take my leave.

[Doyle photo by Richard Dowdy. Thanks to Steve Heilig for the musical inspiration]