My work productivity, and maybe yours too, was way down last week during the final two days of the Tahiti Pro. A WCT contest in great surf will always command my attention. When the surf is both great and death-defying, like it was at Teahupo‘o, I hold on to my laptop as I go about my day the way my son used to hold onto his stuffy, and do not miss a single moment. I want the ups and the downs and everything in-between. I want the hair-outs and the shoulder-rides as well as the perfect scores. Unless something happens that needs explaining, however, I do not want to hear a thing. The mute button is Viagra for my WCT attention span—the quieter it is, the longer I last. And the longer I last with a contest like the Tahiti Pro, the more it seems to become a movie or a play, writing itself as it goes, with plots and subplots and twists, and characters of every description, many of whom I have strong, if temporary, feelings for. Not real feelings. Sports-fan feelings, which are subject to change year to year, event to event, sometimes even heat to heat.

Bringing me to Gabrial Medina. Not everybody swoons for his surfing. I always have. Riding aside, what I appreciate about Medina is his lack of pretense. He does not want to charm you or win you over. He is the Bride, except male and dark-haired, skilled and remorseless and picking off one surfer after another on his way to who knows how many world titles. I find it refreshing, purifying even, that Medina goes about his work with so few fucks given as to what we think about him.

Then last April I saw Medina on a video chat with Jair Bolsonaro and Bibi Netanyahu and Neymar, and you know me, I’m so left I can barely turn right at the corner to get my quad-soy caramel drizzle latte each morning. Ever since, I’ve been trying to maintain the righteous dislike for Gabe I felt after watching that grinning four-way reacharound of a conversation. But I’ll tell you something, and I’m at a loss as to whether this makes me proud or ashamed. As a WCT fan, surfing beats politics. Watching Tahiti last week, I gave up. Gabby is still my guy. He met Owen Wright in the final, and with Owen holding a lead going into the last few minutes my eyes locked onto the screen, trying to conjure up a set. It didn’t come. Owen first, Gabe second, and me still sulking later that evening as I pulled the cork on a nice dry Alsace Riesling. Being a fan means never having to say you’re sorry. 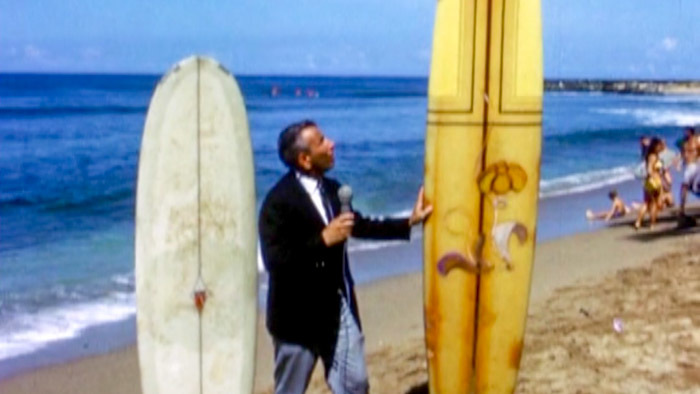 Speaking of politics and surfing, here is a 33-minute editor’s cut put together by Wide World of Sports’ producer Larry Lindberg, of the 1968 World Championships, won of course by surfer-turned-Republican-state-senator Fred Hemmings. You might need to soak a bit in 1966 and 1967 to work up an appreciation for the surfing presented here. What I found more interesting, on this go-around anyway, is how masterful Lindberg is with the presentation. Much to be said for the in-house movies we got during this period from Paul Witzig and MacGillivray-Freeman and the like. But only Lindberg had the sense to (for example) just stand a 1967 surfboard up next to a 1968 model and briefly explain the difference (see photo above), and the on-camera quotes he gets from Nat Young, Midget Farrelly, and Hemmings are miles ahead of what our in-house other filmmakers were doing. (Shame on all of them, Lindberg included, for not interviewing Margo Godfrey, world champ at 15 without even breaking a sweat.)

You can read Dick Graham’s first-hand report on the ’68 titles here, and Ben Marcus put together a big chunky oral history of the event, which you can read here. I spent a couple of hours looking for more info on Jerry Bujakowski, who proudly (or opportunistically? or both?) carried the flag for India during the ’68 world titles, and redid his EOS page. The pic you see here of Bujakowski in action at the contest will never not make me smile. A few years back I did a whole column on how Kelly Slater will never outdo this wonderfully determined sneaker-wearing footnote of a surfer.