WSL Finals Day 2022 is a wrap, and we won’t dwell too long, but I watched the entire damn event and need to get a couple of things off my chest. First, I’m okay with the ten-surfer one-day title shootout format. Yes, it means that the best performer over the course of the year—the surfer who, in the old aggregate-points format would have been the champ—might get kicked down to runner-up. Carissa Moore being Exhibit A. But if the shootout is a bit less fair to the pros, it is way more entertaining to us viewers. A tidy half-day of competition, no throwaway heats, guaranteed drama start to finish. So far, so good. Yet the WSL continues to shoot bullets into its own foot, which at this point is hardly even a foot, just a pulpy mash atop a mound of spent ammunition, and building up to a “historic” Finals Day climax held in wind-chopped shoulder-high Lowers when just three weeks ago the pros were slaying green-blue dragons at Teahupoo (or not slaying; both our new champs barely drew their swords in Tahiti) is a level of corporate sporting mismanagement so extreme that, ironically, it circles all the way back to historic. As in—I cannot imagine another example, in pro-level sports history, where the finale is so likely to fall short of what it could and should be.

How did this become a problem in the first place? The pain in your head goes away when you stop hitting it with a hammer. The mediocrity of Lower Trestles being the hammer. Nobody will care about the shootout format being maybe possibly kinda unfair to the surfers if Finals Day is held in pumping eight-foot Pipe-Backdoor tubes. Am I wrong? WSL decision-making is so bad it feels like performance art, in which case maybe I am in fact missing the point. It would not be the first time. 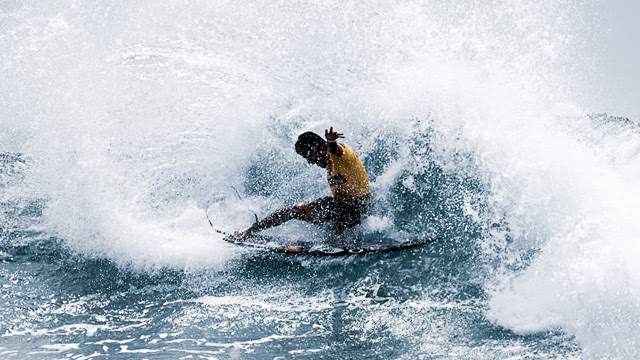 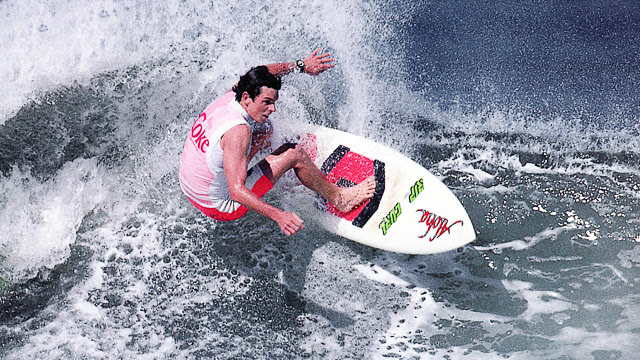 Before moving on, and even though I have taken a small dig at him above, I’d like to say that Filipe Toledo is a fully deserving world champion. No asterisk. Toledo does not ride big heavy reef waves, in fact he doesn’t even really try, and this is not ideal. But he was so much better than everybody else this year in high-performance surf, so much faster and cleaner and ahead of the performance curve—note, by the way, that he didn’t go to the air once in his Finals Day heats against Italo—that the bigger crime would have been for the title to go anybody but Filipe. The comparisons now being made between Toledo and two-time world champion Damien Hardman are, for me, off base. I’m okay with Hardman’s world titles as well, even though, like Filipe, he had no interest in big surf. But Damien got to the podium by way of calculation and dead nerves and bottomless poise. Heat after heat, contest after contest, he did not put a foot wrong. Damien beat you with overwhelming proficiency. Filipe, on the other hand, motored into those soft dishwater rights at Lowers last week and rode like someone we will meet and love in the next Incredibles movie. Scroll to 5:19 on this clip and see if you agree—although the point I’m trying to make may not work out of context with how everybody was performing, and while I know you non-CT folks will tolerate this contest hoo-haw up to a point, I will not ask you to go back and watch earlier heats and risk breaking the trust we have thus far built up.

Filipe Toledo and Stephanie Gilmore are both righteous champions atop a glitzy, flimsy, hapless professional organization. They should be better served, and who knows, maybe things will improve CT-wise in 2023. But right now they deserve to be simply and loudly celebrated. 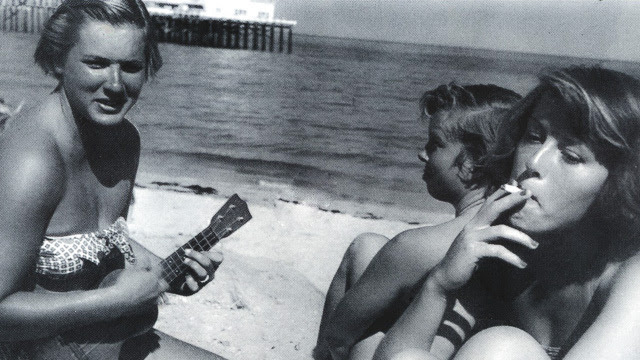 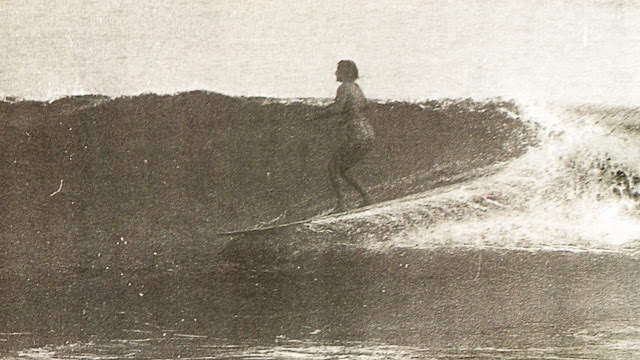 Vicki Williams, who in her surfing heyday went by Vicki Flaxman, looked like Steph Gilmore but with 25 added pounds of lean muscle in her arms, shoulders, back, and thighs. She out-surfed all of the women and most of the men at First Point Malibu during the early 1950s, and if Finals Day (or my possibly-too-lengthy recap of Finals Day) has left you wanting to get your feet back into the earthbound and slightly delinquent foundation upon which our non-sport sport was built—Vicki Williams, 90 years old and serving for the win at this moment on some godforsaken heat-blasted pickleball court in Sun Valley, Idaho, is here for you. New EOS hire Ella Boyd talked with Williams at length, and you won’t regret setting aside 20 minutes to read the whole thing, but for the moment let’s enjoy this short excerpt.

Did you know pretty much everyone who surfed Malibu?

Yes, pretty much. Unless they were from the Valley. You know, we weren’t even supposed to be on the beach at Malibu. There had originally been a big wire fence because of that estate right on the point. They’d fenced everything off but we tore the fence down, and that’s how we got to the beach.

How was it being around celebrities [from nearby Malibu Colony]?

We kind of thought they were weird. They were older and they didn’t surf. The Malibu scene was local, very local.

Do you think people even knew about you guys surfing or did they just not pay much attention?

Nobody paid any attention. They didn’t know what it was, or what we were doing. They’d see the surfboards on the car, but they didn’t really know.

Did you go to San Onofre?

We did, and everybody laughed at our boards!

I’ve often said that I love surfing, not surfers. But sometimes I really love surfers. 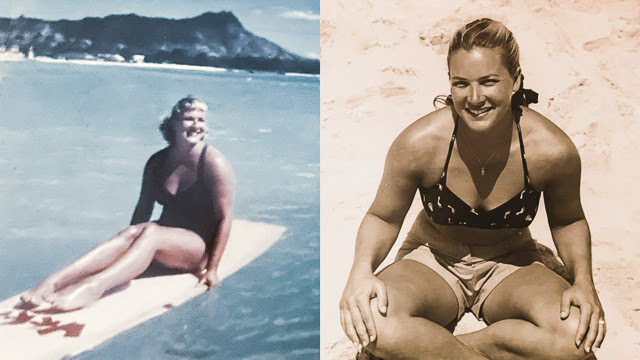 PS: Vicki was married for 57 years to Green Hornet star Van Williams, before that she was married briefly to another Hollywood hunk, and while in Hawaii she dated a Kahanamoku—one of Duke’s nephews, I think. She was big and strong enough (160 in her wet Jantzen two-piece) to crush men, but why bother, they fell at her feet.

PS: I’ve watched every episode of The Crown, and therefore felt a tug of sadness, on Finals Day morning, when the news came out that Queen Elizabeth II had died. (“Priority change to Charles!” was the first post-death comment on Beachgrit’s Finals Day thread, and I 100% believe Vicki Flaxman and her reprobate midcentury Malibu pals would have laughed as hard as I did at that.) Later that afternoon, my former boss Paul Holmes Facebook-posted the photo below, shot in 1966, of himself in parade rest stance before HRH at a Newquay pool. That’s Paul, second from the right. In fact, Paul reported, they exchanged a few words. 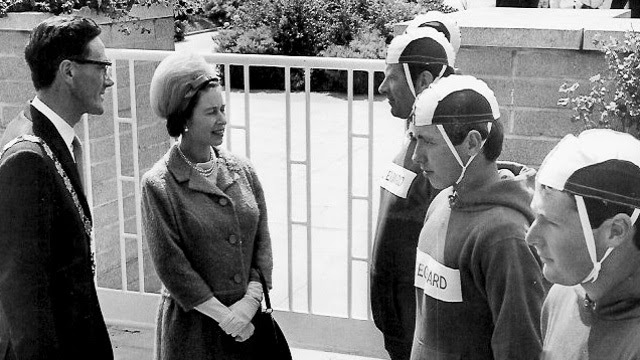