Fire and plague and a dozen other gloom-inducing recent events have led me to George Freeth, just as surely as romantic heartbreak used to lead me to Otis Redding’s ballads. Sometimes you fight the sadness, other times you melt into it, and I’ve always viewed Freeth as our sport’s top-ranked melancholic—or possibly #2, behind Tom Blake. Freeth was unmarried, childless, itinerant, underpaid, and estranged from his family. He died in the 1918 influenza pandemic, at age 35. Maybe I’m reading more into the pictures than I should, but Freeth seems to carry all that weight and more in those big sad Buster Keaton eyes.

I have long resisted going deep on Freeth for another reason, however. He seemed . . . boring. Courageous and inventive and groundbreaking, yes. But flat. 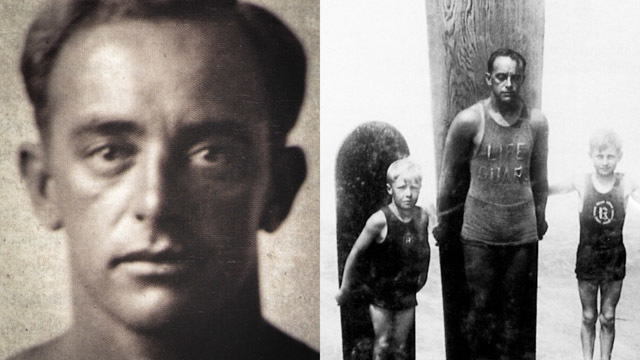 But guess what? You start peeling the cliches off of the George Freeth legend and what emerges is—a sad sack, okay, but a more interesting sad sack than we ever imagined. By the end of my week-long archival swim through Freeth’s life and times (click here) I was buzzing on all the unexpected twists, turns, and quirks. In 1912 alone, he speared a porpoise, bodily flung a peeping Tom into the ocean, and did a bit of cross-dressing undercover work. And how about nasty business in 1909? Am I wrong, or did George Freeth go to court to snitch out his fellow lifeguards, skip town, then return to throw more legal hammers? HBO could mini-series the shit out of that.

We remember Freeth as “Brown Mercury,” as the great importer of American surfing, as a five-star lifeguarding hero. All true, and well deserved. But Freeth also made a watch fob out of his priceless Congressional gold medal, and finding that out on Thursday brought a smile to my face. 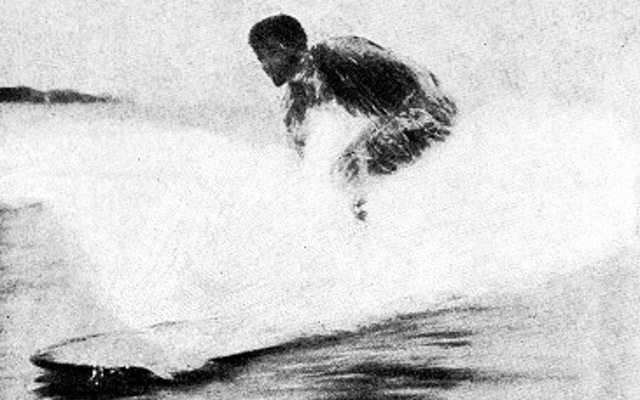 And speaking of feel-good history, by all means carve out a few minutes for this wonderful Freeth profile by Ian Whitcomb. Here’s a sample, in which Whitcomb describes the first meeting of Freeth-fans Jack London and Alexander Hume Ford. More smiles:

Jack and Charmian London met Ford at their dinner table in the Royal Hawaiian Hotel, Honolulu, on the evening of May 30, 1907. The couple had been enjoying cocktails and canapés when up strode a young man who immediately introduced himself as Alexander Hume Ford. He had a beard like the King of Spain and a rattling fine line of talk: “I’m told I resemble Bernard Shaw—what’d you think?” Both men admired each other’s firm handshake. Ford didn’t want to appear to be sucking up to the celebrity, so he jabbered away.

The Londons learned that Ford had been born in South Carolina to an old Southern family, and had written plays with Mark Twain himself. He had arrived in Hawaii only a few weeks ago but was already burrowing deep into the local culture and was anxious to revive the almost extinct art, yes art, of riding down hills of boiling foam by half-naked islanders. Had London ever seen such splendid physical specimens? No? Then he must, as soon as possible! Years ago, Ford’s friend Mark Twain had witnessed such surf-bathing and had reported it in his book Roughing It. Twain was disgusted by the puritanism of the missionaries, ignoramuses who’d repressed the “natural ways of men,” who’d put a stop to native sea pleasures such as surf-bathing in the all-together when the girls’ breasts swung freely in the breeze and the boys’ privates smacked to and fro.

Now that is top-shelf nonacademic history writing, and let us detour Whitcomb himself, an artistic omnivore who hit the charts in 1966 as a British Invasion rock-and-roller (watch here), then nimbly pivoted to history writing and music production. Detour to my detour: Whitcomb produced Mae West’s camp classic 1972 EP “Great Balls of Fire,” and for you ankle-biters under the age of 80 who haven’t heard of the great Mae West, the original Blond Bombshell, the purring hand-on-hip mistress of the sexual double-entendre, here she is in 1940 dropping D/s knowledge on a classroom full of backwood yokels. 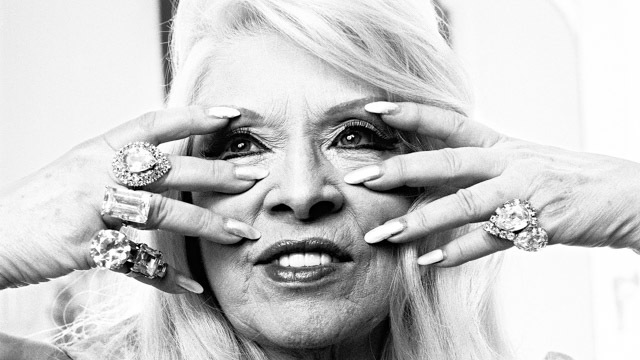 Nobody can follow Mae West—except Mae West. “Ten men waiting for me at the door? Send one of them home, I’m tired.”