My wife and her two sisters used to get dropped off at their grandparents’ house, and sometimes for lunch the girls were treated to Jello Surprise in which, through some midcentury kitchen magic, pieces of fruit and marshmallow bits were suspended in the Jello mold like tiny sea creatures. So far so good. In her declining years, however, Grandma Mildred became, let’s say, a bit more freestyle with her ingredient list and Jodi would look down at her quivering lime-green meal to find beans, Cheerios, bacon bits and other sundry leftovers floating alongside the marshmallows.

Friends, this is your Sunday Joint Surprise. Except I believe it will go down easier.

Let’s start with this home-movie edit of a 1975 Hatteras-to-Sebastian surf trip, with the James Gang and the Allman Brothers taking turns on the eight-track. I did a similar edit last year, except that one is set ten years earlier, at Malibu. These “found” bits are my favorite thing to work on these days. Regardless of age or generation, if you’ve ever gone head over heels for surfing and driven off down the coast with friends to find waves, I think you’ll feel what I feel while watching these clips—that you’re basically there in the back seat, hoping and praying for good surf, but ready to turn the day into a good time regardless. Watching these clips, obviously, is a different experience completely from watching Five Summer Stories or Momentum or whatever John Florence put out last month. With those films, the expectation is that we will be impressed, floored, awestruck, and we are. But the awesomeness now comes at us so fast and furious that, for me anyway, I’d rather spend my video time with some anonymous yet familiar weekend warriors looking to ride a few before Mom wants the car back. 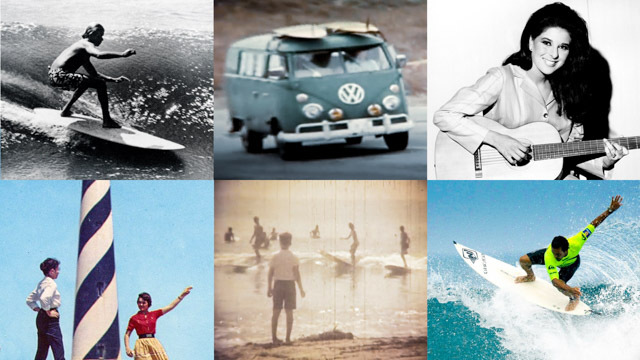 (Nostalgia is having its way with me today, no doubt. But here is something I am not nostalgic about, and that is anything having to do with eight-track tapes, or cassettes, or vinyl LPs, or any other retro music-delivery system, because streaming is the greatest thing since the Dewey Decimal System, and God bless Apple Music and its 14-trillion-song collection for recently getting me to Bobbie Gentry’s “Okolona River Bottom Band,” which is bongos and fuzz guitar covered in Mississippi mud doing a strip-tease while tripping on a half-dose of Monterey Purple.) 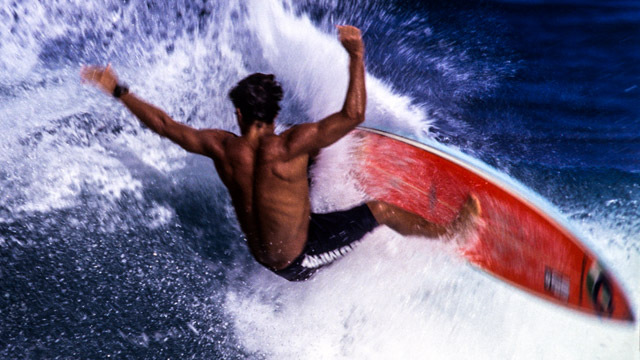 Victor Ribas of Rio was the smallest male pro in world tour history thus far (5′ 4″, 125 lbs), and in gutless beachbreak waves, according to one of his peers, Ribas “surfed like a scalpel.” In 1999 he went all the way to #3 in the ratings, and on the final day of the season was still very much in the world title hunt. Unfortunately, Ribas is best remembered by the surf world at large for 1) a no-waves-caught-zero-points-scored heat at Pipeline in 1998, and 2) throwing rocks at the judging panel after a paddling interference call went against him. Watch Ribas in happier times, slicing and dicing. 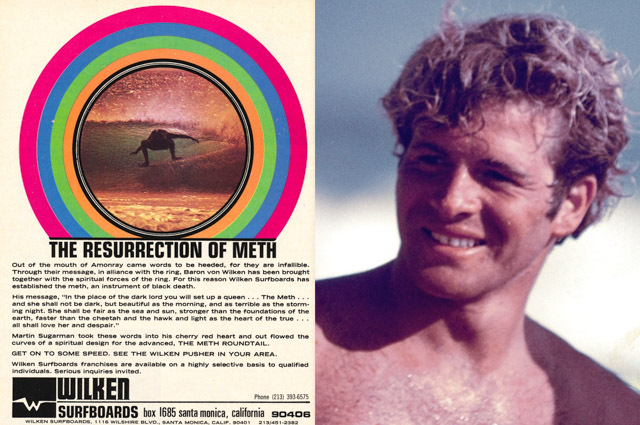 Marty Sugarman, the hot-rat State Beach teen surfer of the mid-1960s who grew up to become, as one reporter put, the “great scholar of California Cool” with his self-published surf-art-culture magazine H20, died recently, at age 74, from Parkinson’s. I knew Marty a little, during H20’s late-90s peak. He was smart and funny, and had a big friendly hustler’s grin. Older surfers probably best remember Marty for his infamous 1969 “Meth Model” signature board, designed (as the tagline read) “For Those Who Like Speed.” Uppers were a thing in surfing back then, but the Meth Model always struck me as an in-joke (although I don’t really get what the joke is on), more so than an attempt to hop on the drugs-are-cool surf advertising bandwagon, as was the case for example with the Roach Model. Asked in 2012 about the origins of H20, Sugarman said that he thought “SURFER magazine was a pornographic publication, because it always showed surfers riding perfect waves. It never showed an unemployed surfer, or a flat ocean, or an unhappy surfer. So it was unrealistic. With H20, we talked about surfing in a wider context.” In the early going, H20 ran articles like “Why Blacks Don’t Surf” and “Why Gays Don’t Surf . . . Or Do They?” But mostly what Sugarman seemed interested in, as was made very clear with H20’s cover shots, were young, beautiful, often topless young women.

Last but not least, a few weeks ago I took Bryan Murray’s 1991 video Hatteras Surf-Feast, triple-distilled it down to its purest 150-proof North Carolina essence, then carefully poured the steaming beaker into a seven-minute remix of Def Leppard’s “Animal.” Watch here, and try to figure out if it is ego or irony or some kind of Tourette’s glitch that has Wes Laine claiming waves like he’s holding a pair of orange batons and frantically waving a 747 to the gate. 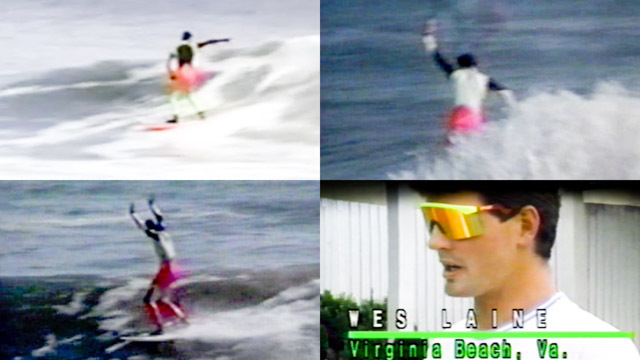