Except for Jesus and Elvis, every famous person’s life eventually gets reduced down and poured into the smallest possible container, and while Florida-based surf photographer Tom Dugan worked miracles at Sebastian Inlet, he will not be mistaken for the Redeemer—redheads never are—and thus I believe Dugan’s contribution will in time rest on just two images. Which is more than most of us will get. First, his 1998 photo of Kelly Slater, midway through some kind of ninja throwing-star cutback, never one of my favorite shots (I like my rails the way I like my grudges; buried deep), but just the thing if you’re the Cocoa Beach City Council and looking for something upon which to model a highway-adjacent statue of your town’s favorite son. The massive Kelly Slater bronze was unveiled in 2010, and below you see Tom happily sitting by the A1A, big statue to the rear, small version on his knee. Two hundred years from now—or maybe 20 years, shit’s going bad faster than we thought—deep-sea divers will find the Slater statue lording over the watery remains of Cocoa Beach, and I hope Dugan carved his initials somewhere on the bottom of Kelly’s board so as to throw some much-deserved credit his way. 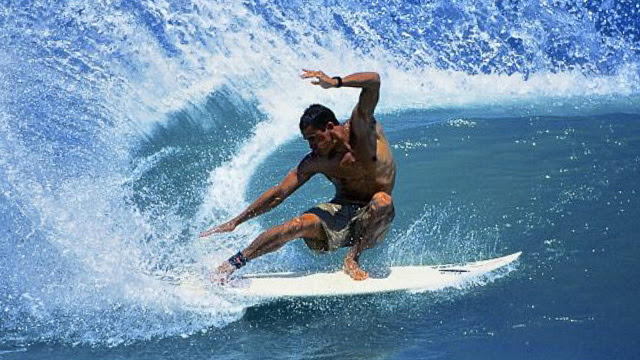 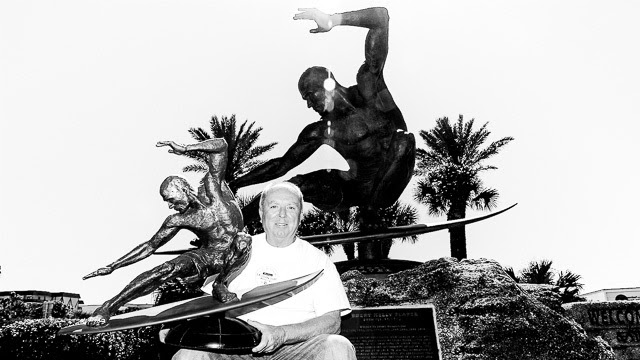 The second career-making Dugan shot, also taken at Sebastian, is of Lisa Andersen doing a big hands-free frontside air. SURFER ran it on the cover of the February 1996 issue with a coverline reading “Lisa Andersen Surfs Better Than You”—the “you” of course being the magazine’s own testosterone-inflamed male readership. Tough crowd. They’d turned on me a few years earlier after my inelegantly-titled “Sexism Sucks” article; one all-caps letter to the editor noted that “WOMEN HAVE BEEN COMPLAINING SINCE THE THE BEGINNING OF TIME,” another closed with “Matt Warshaw FAG!”,  another suggested I start writing for Cosmo which, hahaha, guess what, I was already pitching Cosmo and Esquire both. The same readers turned on Lisa and SURFER, too. Some did, anyway. “Lisa Andersen is definitely not worthy of a cover shot,” a New Jersey reader wrote. “I respect and admire women dearly, but one more female cover shot and you guys are looking at a canceled subscription.”

I’ll tell you who didn’t have to worry about canceled subscriptions, and that was the National Police Gazette, the yellowest of the yellow press, America’s original “gentleman’s magazine,” which was in business for a mind-boggling 130 years (1845-1977) and for better or worse inspired Sports Illustrated, Playboy, Maxim, and National Inquirer. When you sat down at the corner barbershop, waiting to have the quiff trimmed and oiled, you whiled away the minutes with the latest Police Gazette. Bare-knuckle boxing, true crime, sex scandals, celebrity gossip, vaudeville reviews, casual white-supremacy and full-frontal misogyny—the pink-paged Gazette had it all, and what it had the very most of was the titillating Page One pin-up girl, although they weren’t called pin-up girls yet and the early ones were presented in woodcut reproduction. (I am impressed, here in 2022, at the level of imagination needed to transform a woodcut illustration into sexual fantasy, but Irving Berlin is here to tell us it happened all the time, with his fantastic Depression Age pick-me-up ditty “Girl on the Police Gazette.” 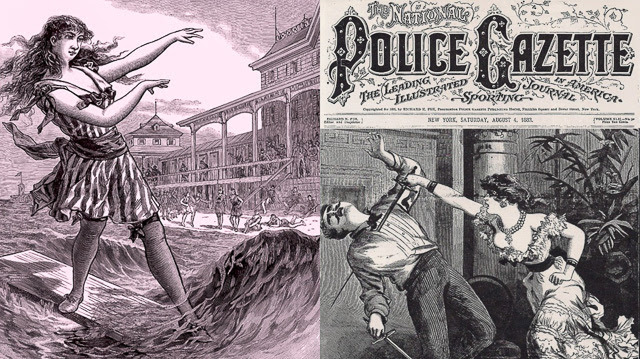 The surfboard-riding Police Gazette cover girl for August 18, 1888, was identified as the “Gay Queen of the Waves,” and while the image you see above has been floating around the surf history back channels for the past 15 years, it took another decade to connect the wild-haired bare-armed woman to the ocean-going New Jersey “goddess” as described two weeks earlier in a Philadelphia Press column titled “Sounds from the Sea.” An excerpt:

A group of summer loungers on the beach at Asbury Park were watching the antics of a dark-eyed, bronze-faced girl in the sea this morning. [She] was beyond the line of breakers and standing on a plank that rose and fell with the swelling waves. Her bathing dress was of some dark material, fitting close to the figure, the skirts reaching scarce to the knee, her stockings were of amber hue, adorned with what from the shore seemed to be vines and roses in colored embroidery. She wore no hat or cap. Her tunic was quite sleeveless, and one could scarcely fail to observe the perfect development and grace of her arms.

Again, no name is given. However:

She comes from the Sandwich Islands and is making a tour of the country. Her father is an enormously rich planter. She arrived [in Asbury Park] a week ago with the family of a wealthy New York importer. She is at a fashionable hotel, and is one of the most charming dancers at the hotel hops, as well as the most daring swimmer on the Jersey coast. She is well educated and accomplished, and, of course, speaks English perfectly, and with a swell British accent that is the despair of the dudes. She learned to be a mistress of the waves in her childhood at her native home by the sea, where, she modestly says, all the girls learn swimming as a matter of course. 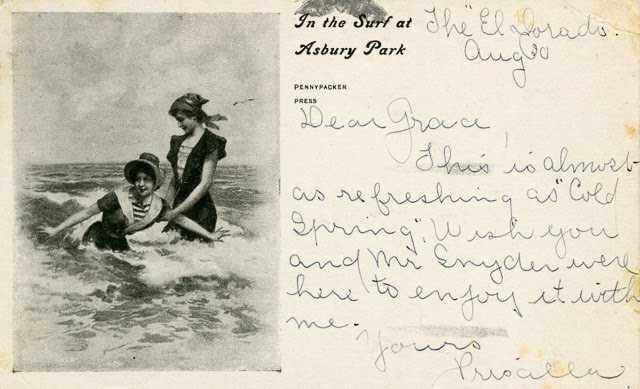 Vincent Dicks, a New Jersey history buff, recently determined that our Gay Queen of the Waves was none other than Emma Spreckels, daughter of sugar baron Claus Spreckels and great-aunt of surfing’s celebrated crash-and-burn cliche Bunker Spreckels.

Dicks is working on a book on Emma, who was just 18 when she visited Asbury Park and became the first known person to surf on America’s Atlantic Seaboard. It is hard to stand out among the extended and for the most part filthy rich Spreckels clan, with their various Succession-level ambitions and rivalries and power flexing (Emma’s brother Adolph, for example, upset about a San Francisco Chronicle article in which the family company was accused of corruption and fraud, walked into the paper’s office and shot two bullets into the editor’s arm), and Emma by and large seems to have vanished from the record. I wish Dicks the best of luck with his research. Book-title-wise I think you could do a lot worse than Emma Spreckels Surfs Better Than You, and you can have that one for free. 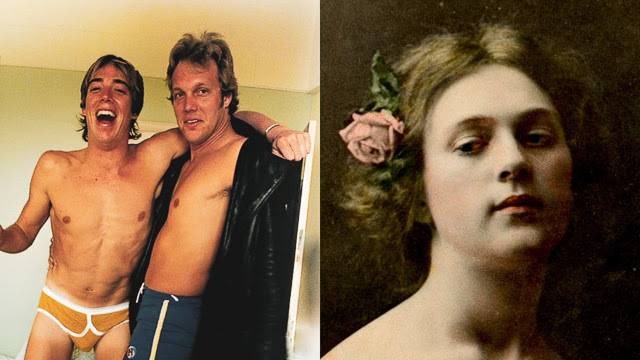 PS: I’m still new to this incredible family saga, but at the moment by favorite Spreckels is fellow SF Sunset District escapee “Big Alma” de Bretteville Spreckels, above right, who rose from poverty by taking her first lover to court for “personal de-floweration”, drank martinis by the pitcher, modeled for the glorious Union Square-mounted Dewey Monument, and literally invented the phrase “Sugar Daddy.” Alma was Bunker Spreckels grandmother, no surprise there.