Big waves put the wind right up me, big books do not, and to explain we must return to Venice Beach, 1972. The Breakwater that year kicked my prepubescent 7th-grade ass so hard one morning that Allen Sarlo—just three years older, but covered head to toe in muscle and hair—swam over to rescue me. I walked home and got in bed and continued reading Hawaii. James Michener’s 1959 book is rightly considered a masterpiece of historical fiction, and while I can’t say I enjoyed every one of Hawaii’s 937 pages—Michener scared a lot of readers off with a showy but unnecessary opening chapter on Hawaii’s geological formation; even at that age I had enough sense to jump ahead to Chapter 2—for a few weeks I carried that brick-sized paperback around like a toddler holding a beloved stuffy, and was forlorn when I at last reached the end. To be clear: Size in and of itself means nothing. But apart from that opening chapter, Michener needed every one of those 900-plus pages to tell his epoch-spanning tale, and lo the notion was visited upon me: big waves bad, big project good, and here we are with EOS and this fine tropical-scented Sunday Joint. 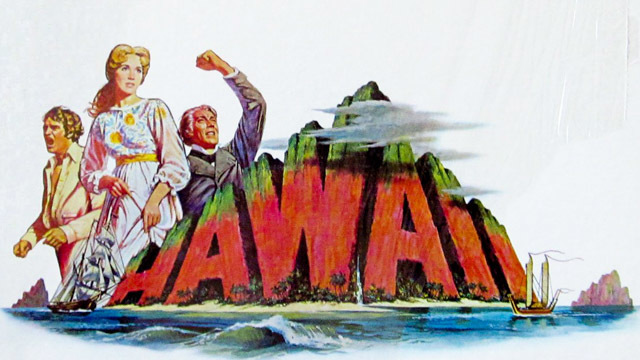 Read an excerpt from Hawaii here. If you have a couple of minutes left, watch the trailer for the spectacularly overwrought 1966 movie. Do not judge the book by the film. That said, you’ll spot a lot of talent onscreen, including Richard Harris, Max Von Sydow, and the always-radiant Julie Andrews. Gene Hackman plays Doctor John Whipple, the good missionary—as compared to Reverend Abner Hale, the killjoy Man of God based on Hiram Bingham—and it is Whipple who, upon arrival in Lahaina, sees some local surfers gliding shoreward, cocks a jaunty eyebrow their way and vows to try surfing himself. (Raise a glass to the still-living-but-long-retired Hackman, who could light up a big screen in 15 different ways but was especially good as the heavy.)

As a last note re Hawaii, I seem to recall Wayne Bartholomew saying that his Come to Jesus moment following the Bustin’ Down the Door smackdown happened after somebody gave him a copy of the book, the reading of which allowed him to understand why his mouthy mid-’70s turf-grabbing white punk persona was so offensive to Hawaiian surfers. 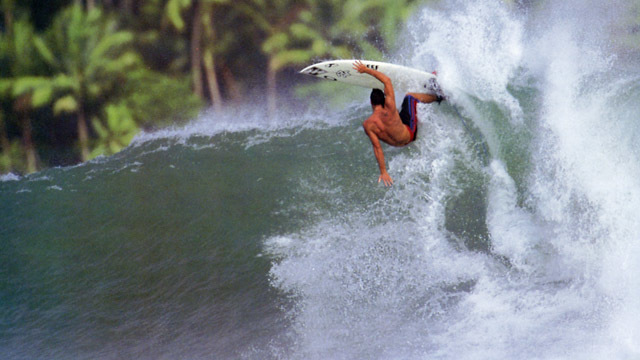 Jump ahead 20 years and we find Brenden Margieson, the Missionary of Mateship, the High Priest of No-CT-Needed Surfing Perfection, and while making this clip of Brenden I was struck by how his waveriding seemed to rev higher and harder as he aged. When Jack McCoy filmed Margo for Sik Joy and Sons of Fun and the rest of those gorgeous early- and mid-’90s Billabong movies, Brenden’s knock-kneed power-chi and flow looked like upgraded Mark Richards. Ten years later, in 2005’s Passion Pop, Brenden is loosing off bullwhip top turns, the spray from which must have burst forth from the TV screen to anoint young Dane Reynolds. I direct your attention to that gouging two-stage knockout of a turn at 2:05. Am I wrong? 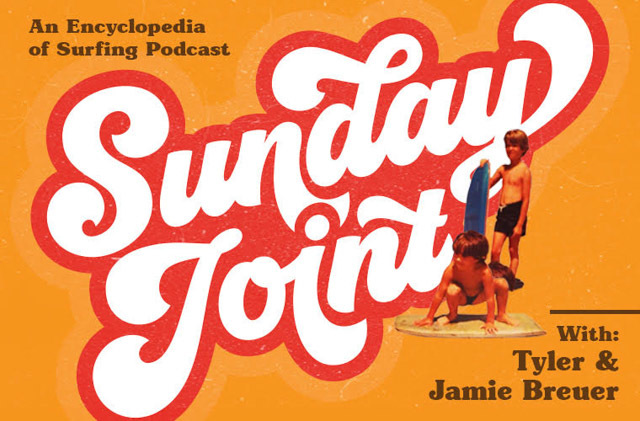 Last but very much not least, I am proud and excited to announce the debut episode of the Sunday Joint podcast, hosted by Tyler and Jamie Breuer. Fellow public radio lovers, do you remember Car Talk, with the Tappet Brothers, Click and Clack? The Sunday Joint is Car Talk meets EOS meets High Fidelity, and I think you’re going to love it. Tyler and Jamie grew up in New York City (Jamie moved to London a few years back; he’s the one with the soothing British baritone), and they are hardcore surf nerds like us. And like the Tappet Bros they not only know their stuff, they bring the big laughs. This debut episode covers the Biggest Moments in Surf: 2000–2020. Download the Sunday Joint wherever you listen to podcasts. Let me know what you think.