People used to speak of 1970 US Champ Brad McCaul in the same breath as Wayne Lynch and Rolf Aurness, which, yes, they were all fizzy young goofyfooters born in 1952, but roll the tape (here’s Brad, here’s Rolf, here’s Wayne) and by my unscientific measurement you’d put at least one breath between Brad and Rolf, and five full Bhramari Pranayamas between Brad and Wayne.

Anyway, what caught my eye about McCaul was how hard he was biting Jeff Hakman’s style, which made me wonder, and I’m looking forward to getting thoughts from you guys about this—is it possible to pattern your surfing on somebody who rides in a different stance from yours? Brad, I suppose, answers the question. Yes, it is possible. But isn’t it far more likely you will identify with and emulate those who ride in the same stance as yourself? David Nuuhiwa and Mark Occhilupo are among my all-time favorite surfers, but I never “felt” their turns the I way feel those of Hakman, Curren, Sunny, etc. My response to regularfooters is visceral, corporeal. Seeing them onscreen or in magazines, my arms, legs, head, and torso all ghost along to what they’re doing. Everything in my style is lifted from regularfooters. Nothing came from goofyfooters. Brad McCaul proves that you can in fact steal from the other team, but my guess is this is pretty uncommon. What do you think? 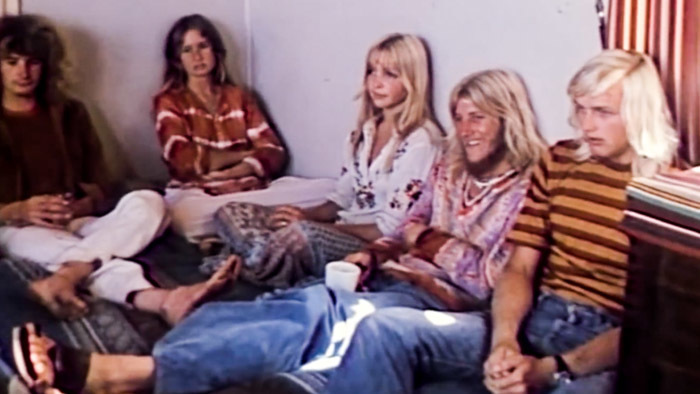 That fantastic Wide World of Sports clip I posted last week on the 1968 World Championships reminded me that some of the most interesting takes on surfing come from outside the sport, and I’m going to post more of these kinds of things from here on out. Starting with this gem from an Australian Broadcasting Corporation show called Weekend Magazine, which I gather was sort of a 60 Minutes but with a great theme song instead of a horrifying ticking stopwatch reminding you that End Days are nigh. In this brief look at the 1970 Torquay surf scene, the first thing that jumps out is how stoned everybody is. This is funny in places (the dude at 7:44), sad in others (the neglected “old lady” at 5:00), and confusing in others (haircut, 6:17).

The fact that the surfing isn’t much to look at maybe works against the show’s premise, in that we don’t get much of an understanding as to the center point around which the whole Torquay scene turns—good and plentiful waves. But the producers do an excellent job, in a very short period of time, at showing us in a nonjudgemental way what it was like to be a young adult in a surf town during a fluid and uncertain era. Yes, everybody is high and idealistic to a rainbow-colored fare-thee-well, and you know the bummers and crashes and flameouts are approaching like a 12-wave Bells Beach set. But I love how adventurous these kids are, and the degree to which, just by moving to a place like Torquay, they have taken control of their lives and are literally, figuratively, and even aggressively creating their own future. Maybe some of this can also be inferred from Pacific Vibrations or Sea of Joy or other period surf movies. But I’d say that here in Weekend Magazine, in less than 10 minutes, the day-to-day experience of being a surfer in 1970 is thrown in sharper relief. True, we don’t really have an apples-to-apples comparison; surf movies lean toward art, Weekend Magazine is more doc. And also true, the internet has smoked my attention span like those Torquay kids smoking a cone of Hunter Valley hooch. But at this point, nonetheless, I really appreciate how these non-endemic looks at surfing feel both deeper and less-filtered then the stuff that came from within the sport.

And once you’ve exposed your breast to arrows of wisdom shot from unlikely places, it is amazing what turns up. Watch this program to the end, and host Eddie Albert—yes, Eddie Albert by way of Green Acres, Eva Gabor, and Arnold Ziffel—will reward you with something very close to a sonnet on the eternal and unchangeable nature of surfing. Hand to heart, watch and see, it is great.