The History of Surfing chapter on surf shops is called “Houses of the Holy,” which I stole from a SURFER article title, and SURFER of course stole it from Led Zeppelin—and apologies, folks, but we’re going straight to sidebars. First, my opinion of Led Zeppelin is a tiny bit lower for the fact that the song “Houses of the Holy” is not on the Houses of the Holy album—at some tender bong-watered moment in time I was laughed at by a roomful of 14-year-old rock snobs for not knowing this basic Led-head fact.

Second, in the Led Zeppelin LP Olympics, Physical Graffiti takes gold, Led Zeppelin II wins silver, and I think the world of IV but it is bronze. Robert Plant agrees.

I am on shakier ground when it comes to surf shops. For sure, I am more ambivalent than either Sam George (read “Shop Talk”) or Nick Carroll (read “Why the Surf Shop Is Sacred Ground”), both of whom recall the shops of their youth the way Proust recalls the madeleine.

And suddenly the memory returns. The shop was a place to worship those tall, righteous apostles, wrapped in sweet-smelling coats of fiberglass mail. Glowing and glistening, [I would] spend all day looking and reaching out and running [my] hands longingly up and down their unattainably perfect lines. An exquisite pleasure invaded my senses. I ceased now to feel mediocre, accidental, mortal. [Thus] was the surf shop hallowed ground . . . a haven for those adventurous men and women who lived in that lonely wilderness of sea and shore. Seek? More than that—create.

You see what just happened? That’s right, we Grey Albumed Sam, Nick, and Proust. I mashed ’em up yesterday and today I can’t tell who wrote what. 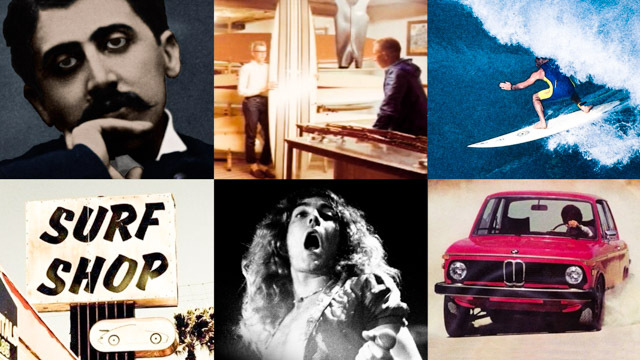 My surf shop memories fall into two categories. Those formed while on the customer side of the counter, during which time there was indeed much rail-fondling and wide-eyed take-in-all in gremmie-age absorption. And those from the years, roughly 1975 to 1984, where I was a shop employee, and my surf shop romance was replaced by something less madeleine and more Office—all the messy, funny, mean, and occasionally graceful interactions between people managing and working in an independent low-rung niche-market business. The beloved salesman who had his fingers in the till. The bosomy junior college coed who broke up the boss’s long-term relationship. The Monopoly-like negotiations when it came to figuring out next week’s work schedule. Some of us had keys to open the shop and some didn’t. Some got to drive the shop truck and some didn’t. It was Game of Thrones at minimum wage with bruised feelings instead of gore.

My favorite surf shop memory took place around the time I leveled up from shop groupie to employee, so probably 1976, and it has nothing to do with surfing. One of the older shop workers, who mostly ignored us kids and was already leaning shady—a year later he cruised up in a new orange 320i and walked in wearing gold-framed mirrored aviator Ray-Bans—overhead a group of us engaged in some no doubt bullshit three-quarters-made-up sexual conquest banter. He walked over, sneering, and asked if any of us knew what the clitoris was. We nodded, hahaha, looked around at each other, signaling that yeah, of course we knew, but no not really. Instead of mocking us for the ignorant dirty-mouthed grubs we were, the older guy pivoted to give us a brief but earnest seminar about what he called the “little man in the boat,” and how you always want to pay attention to the women’s side of things because the sex game works both ways, it is an equal proposition, and the thing to do is make sure she gets off before you get off. This bindle-slinging surf criminal, in other words, took the time to impart a female-forward lesson to a bunch of peach-fuzzed horndogs whose sex ed at that point extended no further than Penthouse Forum letters. It was a nice moment. 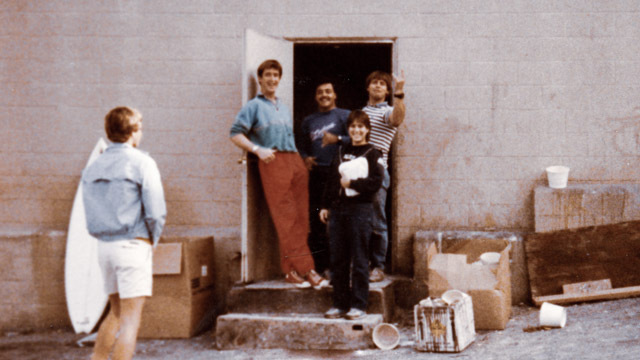 Now, this happened in a surf shop that looked more or less exactly like the one Nick Carroll describes in the opening paragraphs of his article. Which I suppose means that I am just as spoony for those distant Sex Wax and propylene glycol-scented surf shop memories as Nick and Sam. Mine are just more Hank Williams, is all, and I can prove it.

PS: While we’re on the topic, here is a quick photo-aided explanation of why some people think Hobie Surfboards in Dana Point is the first “real” surf shop, even though it opened in 1954, five years after Dale Velzy moved his boardmaking operation from beneath Manhattan Pier to a storefront just off the beach. Have a look. Hobie Surfboards, around 1956 (top), and Surfboards by Velzy, 1952 (bottom). 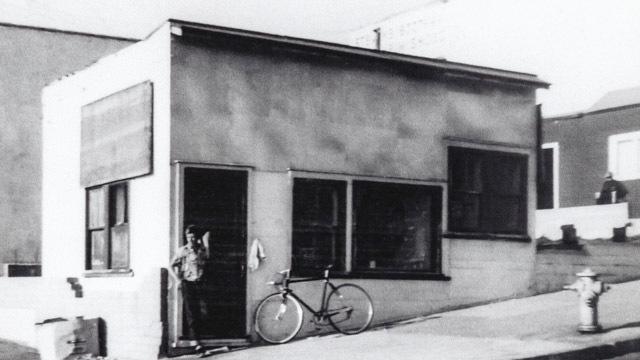 So who was first, Velzy or Hobie? (And yes, Jack O’Neill should be in the conversation as well.) It depends on how you define “shop.” Velzy, to the best of my knowledge, thought of himself primarily as a craftsman, in line with the pre-industrial chairmaker or swordsmith. The other parts of the shop-owning vocation—accessories, promotional efforts, the mechanics of business in general—didn’t much factor in. “One day after I opened [the shop],” Velzy later told surf writer Paul Holmes, “a guy in a suit and tie walks in and says, ‘What are you making?’ I told him I was making surfboards and he says ‘Are you selling them?’ And I said, ‘No not really, I just make them for the guys down at the [surf] club.’ And he tells me he’s with the city and I that if I am making surfboard for sale I need a business license. So that’s how I got the first resale number for surfboards.”

Even though Velzy was business-reluctant, and while his joint was, to put it kindly, stripped down (by the looks of the above photo, three years into his Manhattan Beach tenancy Velzy hadn’t even bothered to hang a sign), I’m inclined nonetheless to say this is indeed the original surf shop.

But Hobie’s case is strong, too. He understood retail from the jump. Big showcase windows out front, display racks, signage, the whole thing. Velzy I think was still moving more boards than Hobie in 1959, when John Severson came around selling ad space for his new start-up surf magazine. Velzy shrugged and bought a half-page—which Severson himself had to lay out, logo included. Hobie bought the inside back cover and rolled that impeccable Madison Avenue custom-script Hobie Surfboards logo out from side to side across the page.

Velzy would stay small, business-wise, and near the beach.

Hobie grew and grew and eventually introduced the surf shop to the shopping plaza.