It is our right—nay, our duty and obligation—to bitch about the WSL and all its many shortfalls. But let us agree that the standard WSL-approved competition setup (man-on-man format, two best waves counted per surfer per heat, subjective 1-10 scoring system) is the way to go. Alternative formats have been tried. All were failures—but one failed a lot slower than the rest, and that was the “objective” system, also known as the Hang Ten or points-per-maneuver system.

I’m leaving out some details, but the objective system worked more or less like this. A contest was divided into two rounds, so everybody surfed twice (the Quiksilver-Eddie event, I believe, still does this), which meant no finals, semis, etc. Your combined score over both rounds determined your final score. Every wave you rode counted toward your total score. A wave score was rendered not as a 1-10 WSL-style numeric judgment, but by adding up each maneuver within that wave, using a predetermined set of point values. The bigger the wave, the more those point values went up. Style and form did not factor in. Yeah, it was complicated and labor-intensive. What you see below is the objective system points chart for the 1973 Bells contest. Any given wave might involve checking off a dozen or more of the point values, all of which then had to be combined. 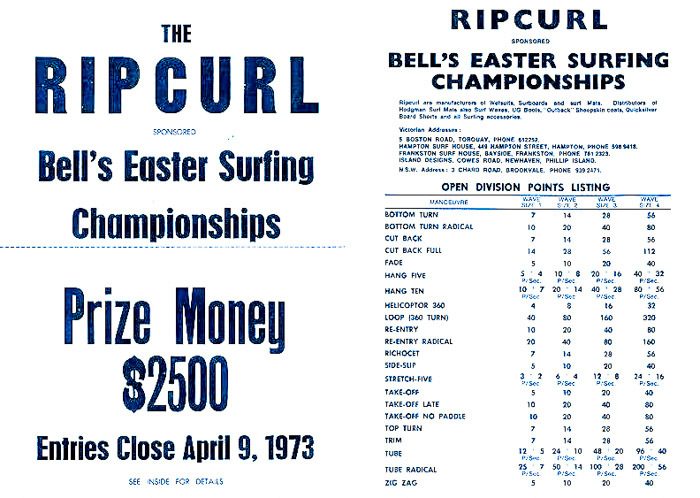 The points-per-maneuver system, I was surprised to find out last week, was the brainchild of boardmaker and big-wave pioneer George Downing, which no doubt helps explain why, misguided as it was, the objective format had as long a run as it did—George’s reputation in surfing at that point was very Neil Armstrong meets Don Corleone. The 1972 Hang Ten American Pro was the first event to use the objective system (Hakman won, and did so again the following year; watch here). I was further surprised to learn that Downing and Surfing cofounder Dick Graham, armed with the points-per-maneuver format, were hotly rumored to be on the verge of launching a world tour in 1975—a full 18 months before Fred Hemmings founded the IPS. (The Downing-Hemmings relationship was fraught, to put it mildly.) 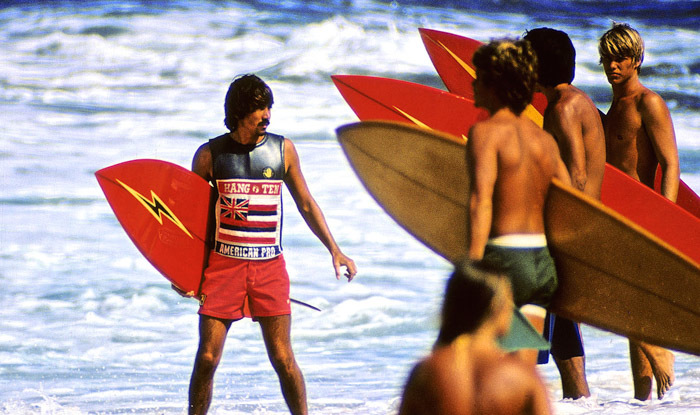 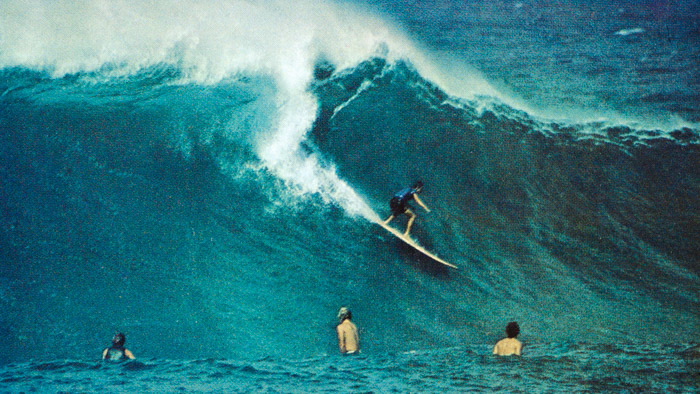 I don’t know when exactly the Hang Ten system breathed its last. Bells used it for a couple of years. The Coke contest did too, I think. But by the end of the decade, we were back to good old subjective judging, and thank God, because it turns out we love kicking losers to the beach on the way to the finals, we love giving someone like Dane Reynolds a 9.8 for one mindblowing turn on a closeout section, and because surfing is of course the most subjective of all sports and thus most deserving of a subjective competition format, flaws and everything. 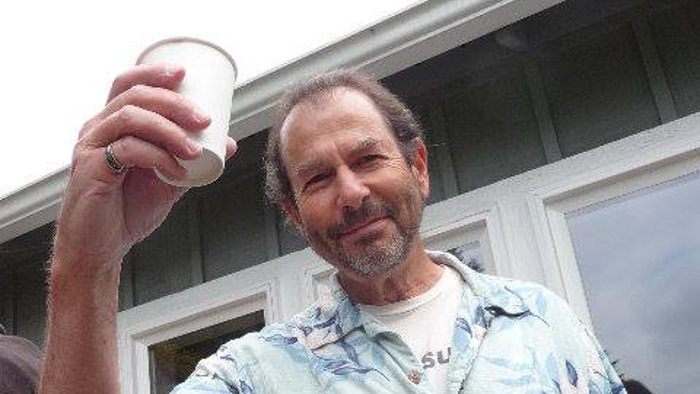 And speaking of flaws. If Aussie fire tornados, a nuked-up Iran, and #WWWIII have turned your “Hello 2020” smile from cheerful to rictus, here is a well-aged piece of Drew Kampion wisdom, originally written for SURFER, that may help. I’ve read this passage many times over the decades, and have always appreciated its elasticity; how it goes from cosmic and grand to specific and grounded. I guess what I like most—although I’ll go to my grave undecided about whether it’s true or not—is the way Drew suggests that riding waves does indeed somehow remove us from the world at large. Just a little bit, but still. Anyway, see what you think.

This is a desperate time. Everyone seeks a way out of, or a way into, their own minds, their own places on earth. We who read this magazine, look at it, or make it up, all share a common knowledge: surfing. Whether there is anything else that identifies us with one another is a matter of doubt or a matter of chance. But because surfing is what we have in common, surfing is the medium through which we must communicate with each other, at least in the beginning. Later, we may find we share a love of nature, a desire for peace, a need for love, a common friend, or a particular belief. But first, because this is a surfing magazine, and because this is the place where we all meet, first we have surfing. [And] when wars and flags and religions and nations and cities and rockets and taxicabs and monosodium glutamate and television are gone, there will still be an order to things beyond the order of power-crazed men. It will be the order of a universe at equilibrium with all the natural forces in balance.

And that’s what riding a wave is.

What’s that? You say a little more uplift wouldn’t hurt? Okay, try this. During the 1970s, Paul Neilsen of Queensland surfed like BK and smiled like Doris Day, and here’s a new four-minute jam of him doing both, set to a Grand Funk Railroad cut so deep that Mark Farner himself couldn’t find it. 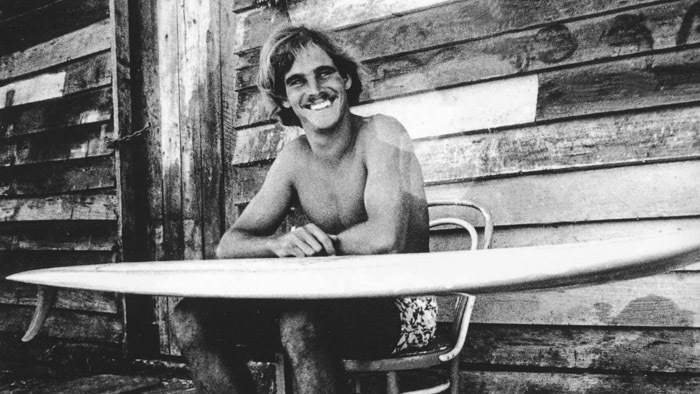 Thanks, everybody, see you next week, and here’s to better days!