The day came and went without me noticing, but as of last month the Sunday Joint is now five years old. “I’m going to try and send one of these out each week,” I wrote on September 3, 2017, back when we were all wearing $500 crop-top designer T-shirts and soothing our frayed nerves with fidget spinners, “mostly just to catch everybody up on what posted [on EOS] over the previous seven days.” In a slightly flop-sweated get-it-on-and-get-it-over-with voice—not enough fidget spinning on my part, clearly—I directed your attention to new pages on Corky Carroll, Henry Lum, and Chappy Jennings, and a blog post titled “You’ve Been Served, Bro: Surf Laws and Lawbreakers of the Sixties,” which includes a surprise-twist bulletin from 1965: “Time magazine reports that the Seacrest Hotel in Delray Beach, Florida, was bitterly opposed to a new ordinance that would open up 200 feet of nearby beachfront to surfing, as hotel owners believed visiting surfers ‘would drive away wealthy regulars.’ But as Delray police chief James Grantham reported, ‘There hasn’t been a single problem. If I were younger, I’d be out there myself’.” Surf-culture-wise, we think of 1965 as an Us vs Them standoff, but things are almost never that clear cut. I hope Chief Grantham got out there and whomped a few. Waves, not wealthy regulars. 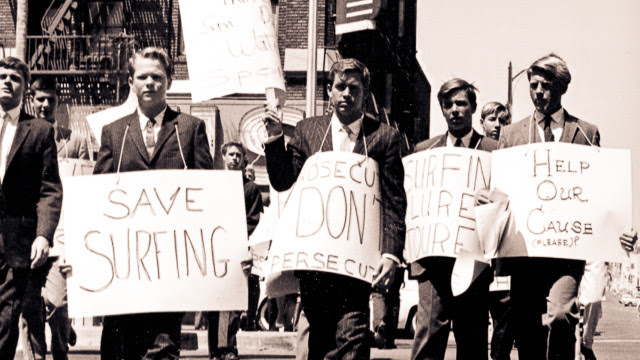 All fine stuff, you’ll agree, but those early Joints were not the soaring and cohesive thousand-words-of-joy that you’ve come to expect from EOS. Then again, you start with “Love Me Do” before you get to “Sun King,” and can I get a witness?

In honor of the Joint turning five, we’re throwing it back to 2017 for a no-frills callout on pages that posted on EOS over the past few weeks. Who am I kidding, there will be frills.

Tom Parrish, Lightning Bolt-era gunsmith to the stars, has two new interview pages, this one from 2013 and this one from last year. Tom’s shaper-by-shaper breakdown in the 2021 interview is excellent, as there is credit given to unsung greats, and maybe a bit of shade thrown at a few over-sung greats. “He was really good in that middle-of-the-road way,” Parrish says of one especially revered boardmaking legend. “His boards were clean and functional. Nothing wrong with boards that work.” That’s Tom himself, below, doing the hard R&D at Pipeline, and Peter Townend proudly posing on a prophylactically pinkened Parrish. 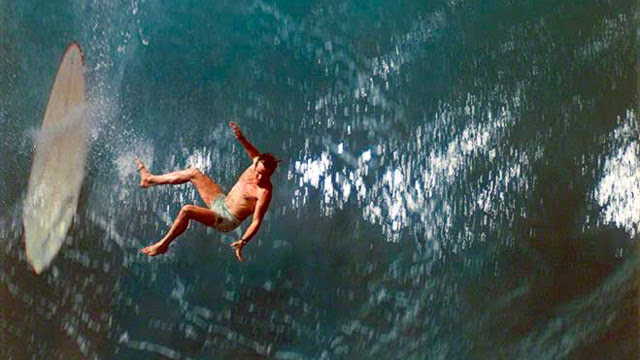 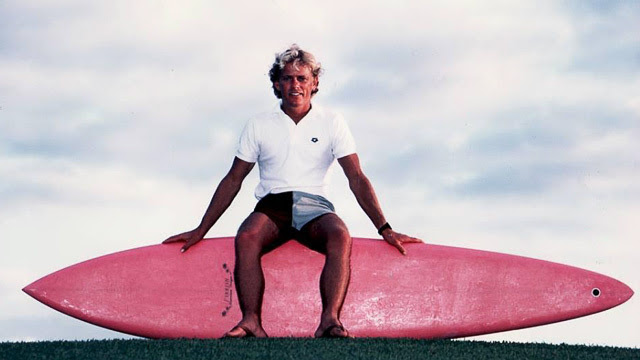 Sandy Ordille, from San Diego by way of Ocean City, New Jersey, a Top Ten pro from the 1970s, talks here about couch-surfing and her ding-repair side hustle during the not-so-good-old days on the women’s IPS tour when prizemoney went from bad to worse—seriously, it dropped from $19,500 in 1977 to $10,000 in 1980, and that’s 10K for the entire year, not just one event. “I never would have been able to participate without the love and kindness of the families I met on Tour,” Ordille says. “In particular, Lynne Boyer and Becky Benson’s families took me in and treated me as one of their own. I mostly hung out with the Hawaiians because they were the most authentic, kind people on Tour. They also surfed the best.”

I tend to think of Shane Beschen almost exclusively as a giant thorn in Kelly Slater’s side during Slater’s first cluster of world titles, in the 1990s. Specifically, and dramatically, Shane’s 1994 US Open win at Huntington, after which he stood onstage and raised the trophy overhead and absolutely stared holes into an overwhelmingly pro-Slater crowd. Shane would lose the war, of course. Everybody did, against Kelly. But he won that battle and did it with fuck-you style to burn, and in fact there is a lot more to Beschen’s story. He is, as far as I know, the only modern-age pro surfer to compete (not always, but often) without a surf leash. He may have surfed some of his beat heats on acid—that’s always been the rumor, anyway, and Beschen has neither confirmed or denied. Here’s a new video of Shane, and I’ve also posted a feature on his historic yet strangely underwhelming 30-point perfect heat at Kirra, in 1996. 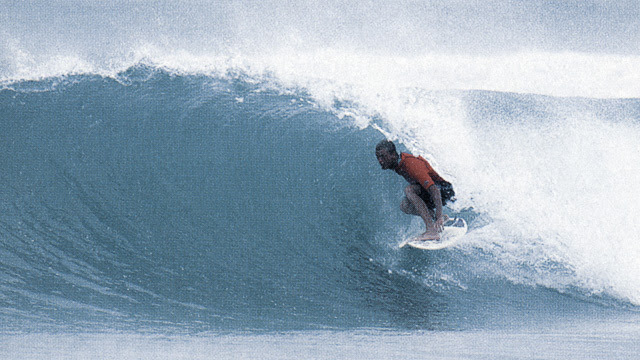 While Shane Beschen is an acquired taste, like absinthe or Marmite, Queensland’s Andrew McKinnon is as instantly likable as sunshine or Tom Hanks or CatsDoingThings. Andy Mac, as he is universally known, seemingly peaked at age 16, defeating Nat Young, Midget Farrelly and Terry Fitzgerald, among others, to win the 1970 Bobby Brown Memorial. But soon enough he was eating pro tour dust as former school pals Peter Townend, Michael Peterson, and Wayne Bartholomew moved into the surf-legends on-deck circle while Andy, back home, tended bar, mowed lawns, and even picked grapes. Was he jealous? Depressed? Nay and nay, he squeezed those grapes into the wine of optimism, changed lanes to surf media, won a world title as a longboarder, and eventually let the push to create the Gold Coast World Surfing Reserve. Andy Mac is cheering up whatever room he occupies at this moment, and his long-overdue EOS page is up, and it comes with a new clip in which we only get a glimpse of the famous toothsome smile but are treated to a jaw-dropping bit of switchfoot magic at all-time Jeffreys Bay. 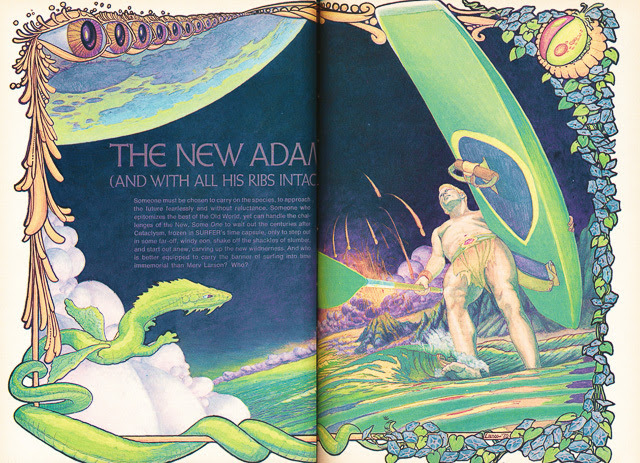 Finally, I’ve been meaning to post Drew Kampion’s 1970 SURFER profile on wave-ski maestro Merv Larson for years, and have finally done so. Just a little background, so as to explain the accompanying art you see above. The Larson article is titled “The New Adam,” because it is part of a concept issue, explained in the magazine’s deadpan cover blurb, “First Annual End of the World Issue,” which all by itself shoots down my theory that American surfing was not funny until Mike Purpus and Angie Reno got into a Playgirl-related sausage fight. Anyway, as Drew viewed it, Merv was destined to be the sole survivor from a planet-drowning tidal wave—”You brought this on yourself, readers, by throwing all those things out of your car windows”—and would thus preserve and deliver surfing to the new age. So that’s what’s going on, above, with the art. I think. Actually, I’m just looking for a reason to get you to watch this short clip of Larson in action, which I still maintain proves Larson to be either the single most ahead-of-his-time wave-rider of all time or, if you insist, locked a dead heat with George Greenough and Mike Stewart.

PS: I refuse to feel snarky for posting the wipeout shot of Tom Parrish, above, because Tom sent it to me himself and it is very much the action highpoint of today’s Joint. But it should be said that Parrish was among the best surfers of his foam-encrusted peer group, not counting Lopez, Reno, and BK, and here’s proof. 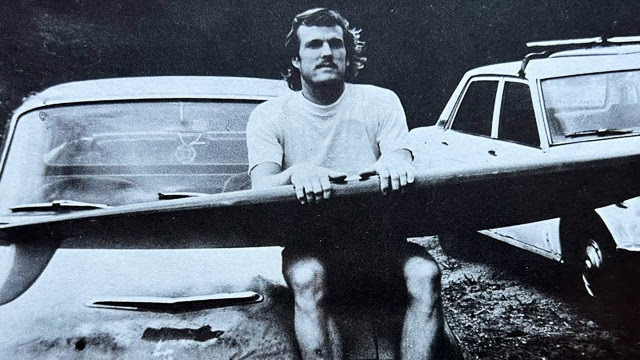 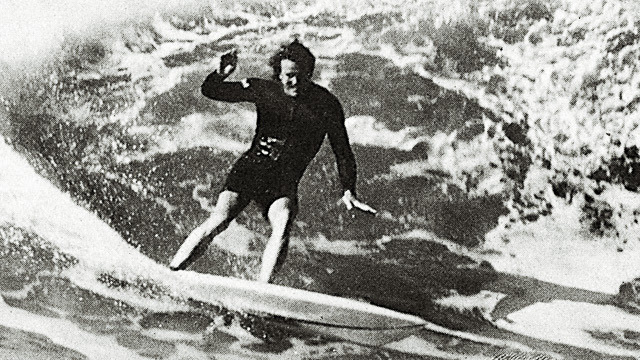 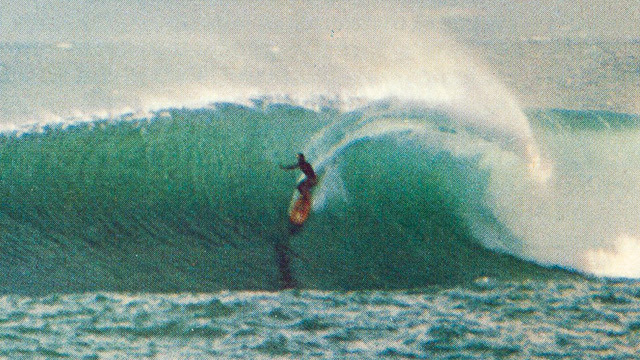 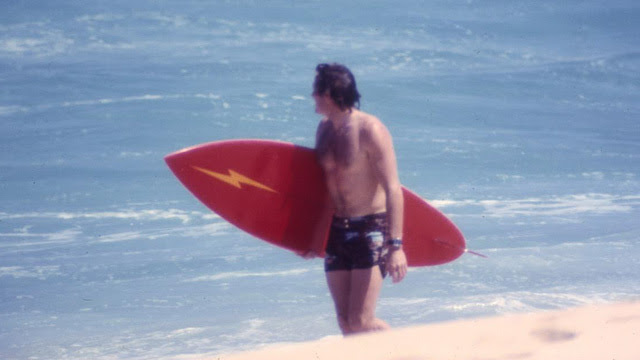