You will hear my red-hot dream team before you see them because they are coached by legendary boardman and South Bondi council flats boulevardier Jack Mayes—aka Bluey Mayes—who was, as Bondi surf historian and poet laureate Peter Bowles recalled, mostly with affection, “the noisiest surfer in the Southern Hemisphere.” Mayes was hands-down the best postwar surfer in Australia. “The last of the hard cutters,” as Mayes himself put it, referring to the absolute circus trick of getting a finless 16-foot plywood-skinned hollow toothpick board trimming out on an angle. Not only could Jack do this better than anybody, he’d also make sure you knew all about it. “Bluey would sit out the back and catch one,” boardmaker Scott Dillon recalled, “then come through saying ‘My wave! Fuck off! Outta me farkin’ way, ya goose!'”

Mayes died in 1997, at age 75. His ashes are interred in the Bondi waterfront seawall. If the City Fathers had a sense of humor, they’d have inscribed the plaque with Scott Dillon’s last and best take on his old friend Bluey: “He was a bit of a prick, but yep, he was the best.”

1969, STEAMER LANE
Big clean Steamer Lane for the final, Corky Carroll for the win, but nonetheless an absolute trainwreck of a contest, with stolen boards, a judging stand pushed off the cliff, a surfer strike, and more. Thank God Sports Illustrated was there to cover it! Earlier in the week, surprising nobody, 16-year-old Margo Godfrey took the women’s division, early $500. Corky, for comparison, got $1,500

1970, MAKAHA
Fifteen-foot-plus Point Surf; Nat Young, bearded like Jesus but surfing like the Devil, for the win.

1971, SUNSET
South African teenager Gavin Rudolf rode Sunset for the first time in his life the day before the contest, yet he smoked the field and afterward delivered a quote for the ages: “The other guys [in the final] surfed Sunset like it should be surfed, where I sort of surfed it like it shouldn’t be surfed, but should be surfed, you know what I mean?” (This 1971 video is not great, and goes on too long, but at the end, during the awards ceremony—am I wrong or is Rudolf, walking up to get his first-place check, Tommy Chong-level high? I don’t think I’m wrong.) 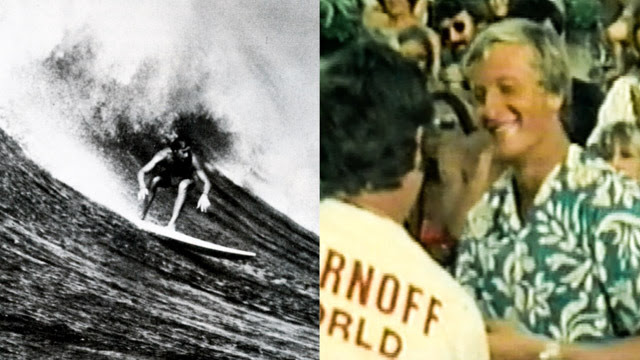 1972, HALEIWA
The Hawaiian newspapers by this time were perplexed, disappointed, and maybe even a little angry that the local pros had yet to take a Smirnoff event—this one, held in excellent double-overhead Haleiwa, went to Gold Coaster Paul Neilsen in a walk. As labeled by the Advertiser, the “Hawaiian Hex” was in play.

1973, LANIAKEA
Ian Cairns bags his first major pro-surfing win and the Hawaiian Hex continues, but from all accounts Larry Bertemann was the guy to watch. Not enough footage here to make the call yourself, but Rubberman is clearly on his game.

1974, WAIMEA
The Big Daddy. The eye-popping Smirnoff all you old salts remember. For decades, this was the big-wave comp against which all others were measured—and found wanting. Reno, the hex breaker, won by the thinnest of margins over Jeff Hakman, then went home and wrote a long, discursive, and well-detailed account of the event: “It Leaves You Breathless” is the best surf contest article of the decade, bar none. As an appetizer, here’s a two-minute Smirnoff ’74 remix edit. The second-to-last wave is Hakman, the final wave is Reno, and you can see why it was more or less too close to call. (Recommended: Kimo Hollinger’s Smirnoff-related anti-contest masterpiece, written in a simmering and eloquent state of anger, just after the ’74 event wrapped up.) 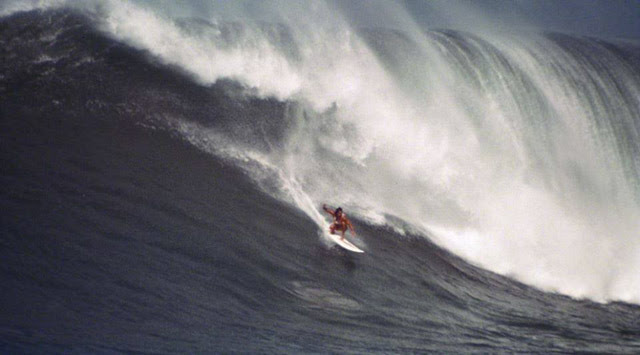 1975, WAIMEA
Lightning did not strike twice, because Waimea is a dumb place to hold a contest unless it is ’74 Smirnoff-level massive. Here in 1975, when the surf was a third smaller, what mattered was not so much the level of performance as the fact that the Aussies went 1-2-3—Richards, Cairns, Rabbit—and thus the door was, if not fully busted down, at least swinging loose on its hinges. On the women’s side, seven pros went head-to-head in a single heat earlier in the week, with Margo Oberg beating Laura Blears for the win. (As an addendum to last week’s Sunday Joint, I found a Miami Herald article in which Blears cheerfully beats up on the libbers: “I know I’m supposed to be for it, but I’m not. I like the deal where the woman is at home and takes care of the family.” Female surfers, for that matter, don’t much impress her. “Girls are too panicky.” Imagine you’re an ambitious Nixon-era female surfer, and you’ve smiled or straight-armed your way past a gallery of dick-swinging surf journalists, apathetic surf editors, condescending sportswriters, and come-back-when-its-onshore surf-meet directors—and here’s Laura Blears telling you to take a deep breath and go bake cookies. Patti Paniccia handled it so well, God love her. Click here and scroll to 7:00. Patti recalls how she basically smiled at Blears and stepped right around her.) 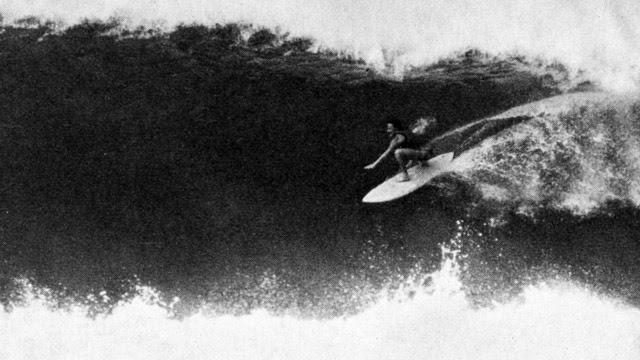 1976, SUNSET
Not-great surf. Big win for Jericho Poppler, as she beat Margo and Lynne Boyer both. Mark Warren also won, probably because runner-up Mark Richards had a crick back, meaning the wounded gull was in fact wounded.

1977, SUNSET
Jericho makes it two in a row, and Reno becomes the first and only two-time Smirnoff men’s winner.

It is a gorgeous clear and chilly Sunday evening here in Seattle and, in words of Bluey Mayes, “Get outta me farkin’ way, ya goose, there’s a Manhattan downstairs with me name on it!”