Mike Purpus is our only blue-chip surfer better known for his accouterment than his wave-riding. All you old salts know the Purp-approved checklist as well as I do: XXL puka-shell necklace, Tom Selleck mustache, Katin trunks year-round (layered snugly atop his fullsuit in winter), Aqualid, wide-brim Ladero hat. Mike strapped Velcro-soled Claws to his feet for traction. He went all-in on those awful popout Hollow W.A.V.E. boards. He was surfing’s Inspector Gadget. On the other hand, Purpus did that 1974 third-rate-Bruce-Weber Playgirl spread which, of course, was luridly accoutrement-free—except for the puka shells. More on that in a moment.

The problem with delighting in all the various and sundry Mike Purpus goody-bag iconography is that it pulls attention from his surfing, which was excellent on many levels. Mike is remembered as a hot-dogger, and that’s not unfair. He wasn’t quick-footed like Dewey Weber or South Bay frenemy Dru Harrison, and rode in a low, crude, tightly-clenched, anti-Lopez stance, but Mike’s work ethic was off the chart, and he would hammer on a single move for weeks, months, even years: the fin-first takeoff, the roundhouse cutback, the 360, switching stance—Purp mastered them all. And didn’t stop there. By force of will, Mike turned himself into a punishing middleweight power surfer, and over time extended his comfort zone from knee-tickling Hermosa Beach summer closeouts to maxed-out Pipeline. (Read Purpus interview here.) 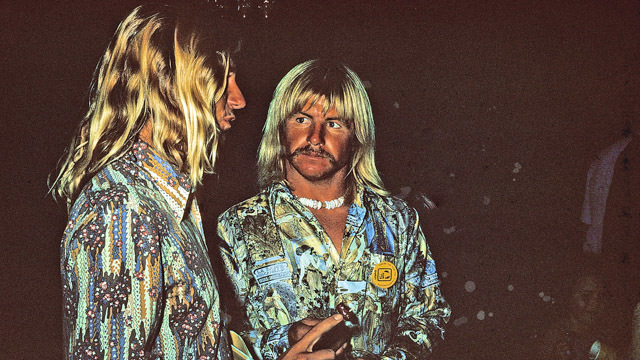 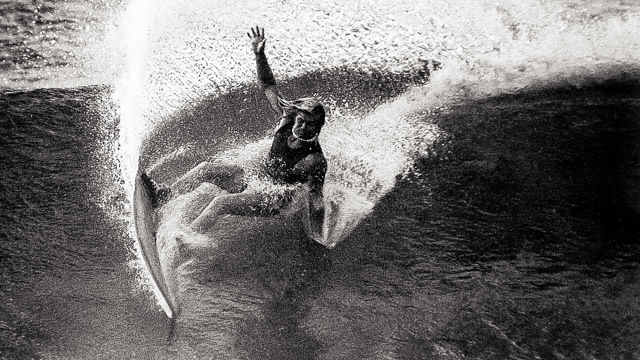 The 1974 Rocky Point photo above, taken by Jeff Divine, has always been my touchstone Mike Purpus image. It is the man in full. Puka necklace, hollow board, Claws, mustache—and the best pre-Shaun Tomson cutback in existence, and no I haven’t forgotten Bertlemann, Peterson, or JJ Moon.  More evidence? Okay, have a look at this just-posted clip, What catches your eye, probably, are the 360s. But what sticks after repeated viewings is the backside rebound at 01:25, and the slo-mo cutback at 02:00. No frills, no tricks. Just solid, deep-set, progressive turns. 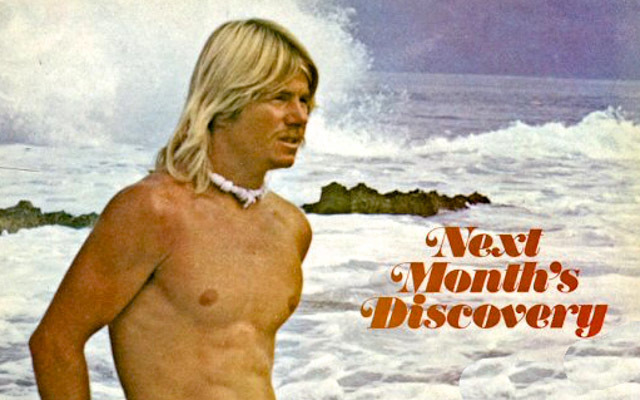 But back to the frills! Purpus and fellow well-mustached surf-hunk Angie Reno got into a Playgirl nude-off in 1974, and it was a hoot. Full coverage, emphasis on “full,” right here. And while I’m running out of room in this Joint and therefore can’t do him justice, Angie himself was a fantastic surfer, a North Shore barbarian, with balls clanging around his knees like dumbbells. See for yourself. (No actual balls shown in video.)