[Greg Noll] was sitting beside Duke at some event that had been arranged in the aging Hawaiian’s honor. The organizers had promised Kahanamoku that he wouldn’t have to make a speech—a prospect that always made him uncomfortable. But at some point, the emcee pointed to Kahanamoku and implored him to climb onstage and say a few words. Ever polite, Duke obliged. As he pushed back his chair from the table, he leaned toward Noll and whispered, “Fucking haoles.”

There is context here that is worth getting into, and I strongly urge you to read Hawk’s full article after we lounge a bit and finish our post-Joint cigarettes. But for the moment I just want to express how much I appreciate any story or vignette that shows Duke as a relatable human being rather than a figurehead or icon.

Here’s another Duke story, but without swear words. Harry Prieste of Fresno won the bronze medal in platform diving at the 1920 Olympic Games in Antwerp. Duke took gold in the 100-meter freestyle (watch here; the post-win smile is itself is pure gold), and at some point a night or two before the closing ceremonies he and Prieste, all jacked on victory and (let us surmise) a half-dozen Saison Imperiales and an Elixir d’Anvers chaser for good luck, found themselves beneath the Olympic flagpoles. “Climb up there, Duke, you handsome bastard,” Prieste said, “and take the flag with the five rings.”

“I’d love to, Harry, but I’m afraid of heights. But wait, you are a platform diver! Heights mean nothing to you!” 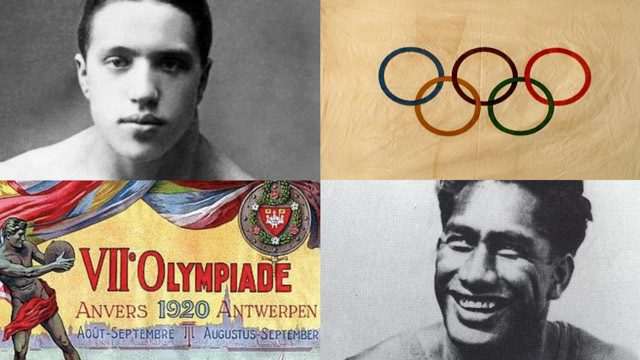 And so, with Duke’s encouragement, up the pole Hal went, and that was that until 1997. Duke of course was long dead by then, but Prieste, 100 years old, attended an Olympic committee banquet at which he revealed that he had the long-missing Antwerp flag—which was the first and original Olympic flag, mind you—stashed in his closet, and for 75 years had been showing it off to friends as a kind of party trick.

One last thing. After the Olympics, Prieste, who lived to be 104, worked as a vaudeville comedian, a stunt man, a circus juggler, and an Ice Follies performer. Suck it, Michael Phelps! 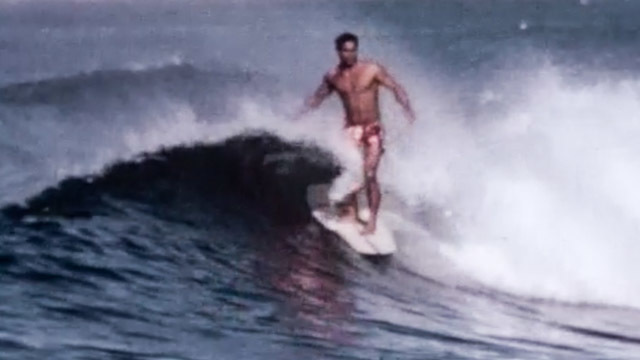 I found some long-lost footage of Ilima Kalama and recut his EOS video. Kalama, winner of the 1962 West Coast Championships (first Hawaiian surfer to take out a Mainland surfing contest, I believe) was among the last old-school upright, straight-back, chest-out stylists. Bobby Patterson and Phil Edwards were, too. All three surfers were more than happy to crouch, lean, turn and improvise (Kalama’s drop-knee cutback at 00:13 is so fine), but they are gyroscopically set to ride at a parade-rest verticality. It is a beautiful way of surfing. Beautiful but doomed, though, predicated as it was on riding heavy, low-rockered equipment. I don’t know if Nat Young personally killed the vertical stance, but it certainly didn’t survive the predatory hunting-tiger approach he brought to the 1966 World Championships, and apart from style tourist Alex Knost we’ve been in a high-performance crouch ever since. 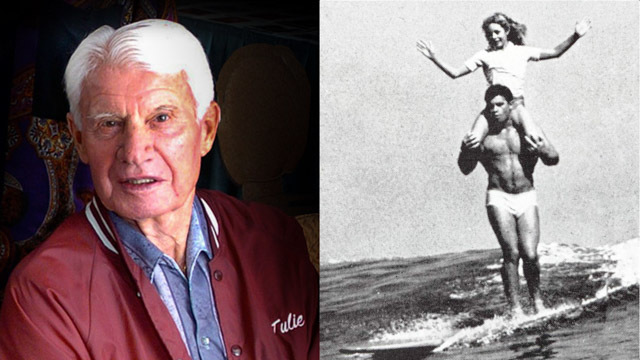 Last but not least, I posted a 1995 interview with Palos Verdes surf-ancient Tulie Clark. This one begins in an era so far gone that it is hard to imagine. Like Sam Reid, Tulie learned to surf on an ironing board. He rode a horse to school, worked the swing shift at a long-shuttered General Motors plant in L.A. for three years (best possible job for a surfer, he says; the morning hours were wide open for beachgoing), then went back to finish high school at age 20. Near the end of the interview, though, the 78-year-old Clark reveals that he is still surfing, then finishes off with a comment that feels like a best-case-scenario for any surfer, anywhere, from any generation. Asked about the secret to longevity, Clark replies, “Swimming, surfing, walking. To this day, I’ve never been in the hospital, never had a broken bone, never had an operation. I’ve got everything I came into this world with. Surfing has a lot to do with that.”

Clark had a 64-year marriage and didn’t shed his mortal boardshorts until 2010, age 93. Michael Phelps, you know what to do!