Gary Elkerton got name-checked in the Sunset Beach Joint two weeks ago, but I was too caught up in the Michael Tomson vs Sam George drama to give Gary his due.

We can fix that.

All four minutes of this new Elkerton edit are great, but obviously I was building up to the big Sunset finale, and while every wave in that series is amazing—and a hard rebuke to the grievous shoulder-riding display we got during the Hurley Pro—the wave at 3:10 takes us to the fissioning core of the Elkerton-Sunset combine.

I would say it is the greatest fade in surf history, except there are so few others in contention that it seems like the only fade in surf history. The fade is a set-up move, a prelude, a way to get you where you want to be. Sunset is to the fade what Périgord is to the black truffle, and hold that thought because we’ll revisit France further down the page. Sunset is a right-breaking wave, yes, but to ride it at all you’re gonna spend a lot of time pointing straight to the beach, and to ride it at the highest level you will at times be aiming east, against the grain and toward the point, adding some left-angling zig to your predominately right-angling zag. Michael Tomson didn’t say as much in his declaration of Sunset as the ultimate big-wave break. But that compass-swinging range of direction is a big part of the Sunset draw—or it used to be, anyway, back when the best surfers paddled all the way outside to ride it. Jeff Hakman had a deep-fade-to-bottom turn so precise and perfect that he looked as if he’d penciled it beforehand with a French Curve. Barry Kanaiaupuni had that smooth fade, too, but where Hakman was always a rock-steady Earl Palmer 2/4 man, BK could jam out some crazy Miles Davis 7/16 shit. 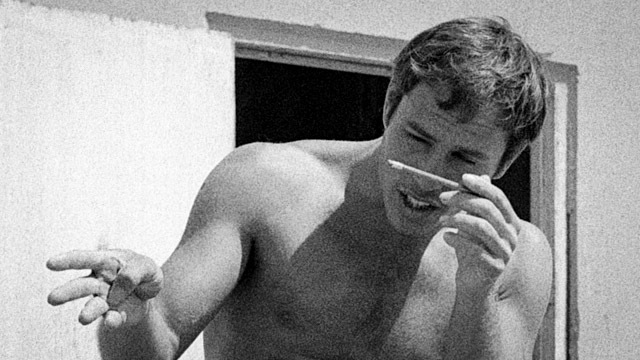 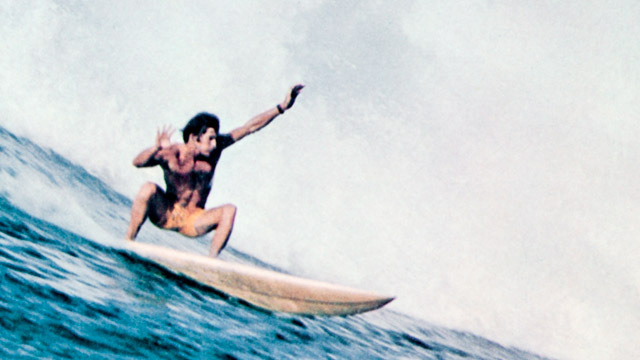 But again, unless you were a real connoisseur, the fade was just the thing you did before the massive bottom turn.

The Elkerton fade I mentioned above is both prelude and the thing itself. It can stand on its own. Hakman and BK and everybody else I’ve ever seen do a giant Sunset fade are all still essentially fixed on, and oriented to, the right. Their eyes might look for the bottom, but are just as likely sizing up the section to come. Gary is not. But he isn’t turning Sunset into a left, exactly, either. Instead, he’s doing something that reminds me of that great Gavin Rudolph quote, spoken just after winning the 1971 Smirnoff as a North Shore rookie. “The other guys surf Sunset like it should be surfed,” Gavin said, his eye pinwheeling, a bit stunned on his good fortune as he’d ridden Sunset for the first time just the day before. “Where I sort of surf it like it shouldn’t be surfed, but should be surfed, you know what I mean?”

No? Okay, try this. Elkerton, when the moment requires it, rides Sunset like a snowboarder, not a surfer. Unbound and full-speed, inventing and tracking along a fall-line that nobody else could even see. Halfway through the fade he does an uphill carve, and the thrill and velocity and sheer joy of that moment is as clear to me today as it was 35 years ago when I watched live from the bleachers. It also, weirdly, looks 100% cutting edge here in 2022, although it is basically an extinct move. Zero chance we’d have seen anything resembling that turn in the Hurley event, even if the pros had paddled out to the actual takeoff zone to begin their rides. Equipment is destiny, and Gary’s choice of equipment—a deep-six channel bottom, just north of 8′ long, twice the weight of Barron Mamiya’s Hurley-winning double step-up—is now found only in board collections and at the business end of Nick Carroll’s quiver. Most pros, today and from yesteryear, would have difficulty turning Gary’s board with anything less than a block-and-tackle rig. Elkerton, of course, plants his feet and swings that thing around as easily as a certain newly-liberated and very angry primate climbing the Empire State Building with his best girl. 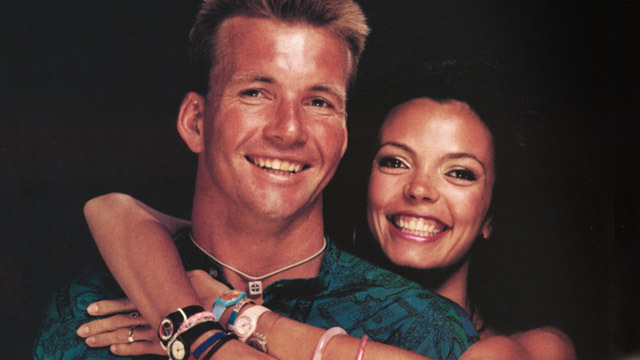 Gary as a person was (and is) as fascinating as his surfing was powerful. A good part of his mostly school-free childhood was spent on a shrimp trawler, with his father, Bull Elkerton. Gary was still known as “Fat Boy” when Quiksilver picked up him at age 16, gave him a media makeover, and turned him loose on the surf world as “Kong,” with strict orders to not go pro but instead surf hard, wear Quiks, get photographed, and basically be a half-scary half-funny surf-action figure.

Elkerton did that for four years and did it perfectly (except he bucked orders and joined the WCT), drunk and coked-up on the regular, but mostly just running on his own premium blend of aggression and confidence and ambition.

Then at 22, Elkerton moved to France with his new wife, demanded everybody to stop calling him “Kong,” and ground out three world title runner-up finishes. Compromises were made. Except in big surf, Elkerton wasn’t as much fun to watch as he had been. But what an incredible turn it was, for this human cartoon to remake himself into a French-speaking sportsman who gave up beer for sparkling water, leaned in gracefully for double-cheek kisses, and could hold his own while talking politics and culture. 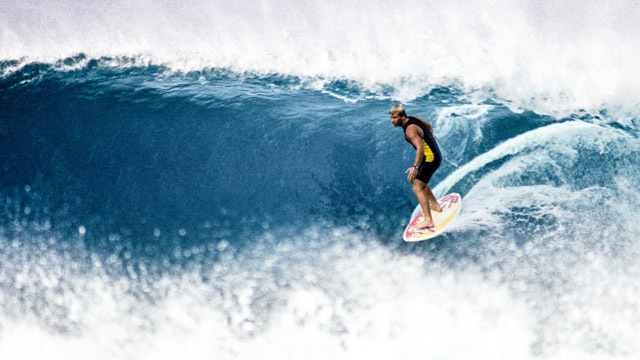 Eventually, inevitably I suppose, we later learned (by way of an excellent if heavily ghost-written biography humbly titled Kong: The Life and Times of a Surfing Legend) of Elkerton’s divorce, his post-tour drift, job loss, another marriage, and fatherhood. He worked construction for a while. Opened a surf school, then shut it down. Did some pro tour coaching; hired out as “brand ambassador” for a Maldives boat tour. Knocked around, in other words.

All of this seemed relatable in ways that the earlier stages of Elkerton’s life did not. There comes a point in adulthood where you realize there is no end zone for happiness, no getting over completely; that doubt and regret and monkey-mind chatter can be reduced but not eliminated.

Or you don’t realize these things, and suffer.

Elkerton closes his book, disappointingly, with a literal happy-face cliché: “The best surfer is the one with the biggest smile.” The better ending is found up front, in the book’s introduction, as Gary recalls collapsing on the beach after winning the 2000 Masters world title, which puts him face-to-face with his own past, specifically the “failure” of his three WCT runner-up finishes.

It wasn’t a celebration, and it wasn’t an expression of relief or triumph. I collapsed because I finally felt the full weight of the gorilla I had on my back. I had no idea how heavy he was until I let him go; until I saw that I was hanging onto him, not the other way around. I’d been carrying the big bastard around since I was twelve years old, loving him and ignoring him equally, but always feeding him. And second-place finishes feed the beast like nothing else.

[I realized] I no longer needed to keep thinking about him, living up to his legend in the water and out, or wrestling him kicking and screaming into the background. I collected myself and walked toward the approaching throng of well-wishers and beyond them into a brand-new and much-improved relationship.

With a gorilla called Kong. 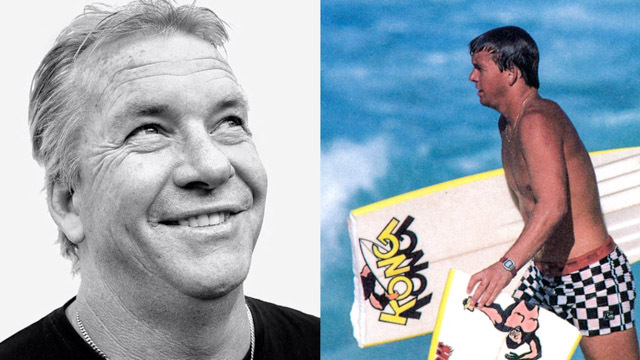 PS: I posted three Gary Elkerton profiles this week, all of them very good. In chronological order: “The Hottest Surfer You’ve Never Seen” (Nick Carroll, 1983), “Gary Elkerton” (John Ellis, 1985), and “Call Me Mr. Elkerton” (Phil Jarratt, 1987). Click here for a 1996 interview Gary recorded just before he retired from pro surfing. Elkerton was the first big-name surfer I ever talked to on record, in 1984, and the results were amazing. That’s me, below, reducing the great man to a submissive cringe with a rat-a-tat line of questions following his win in the ’87 Billabong Pro. 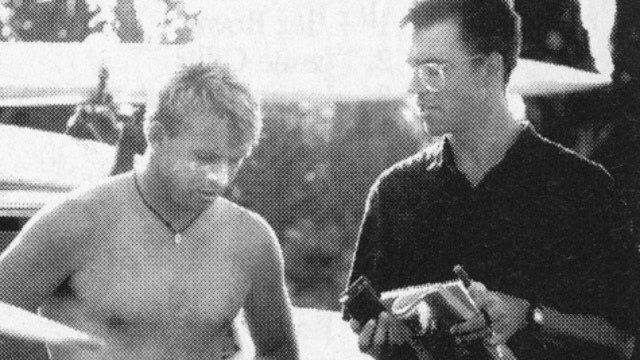