I’ve said Laura Blears was the most famous surfer of the mid-’70s, and stand by that claim, but you’d want to make room up there for Kim McKenzie. The two had a lot in common. Like Laura, Kim was a first-rate surf jock, with a matching set of Australian National Titles (1973 and ’74) to go with her two Queensland States Titles. And, again like Blears, surfing was more or less incidental to her fame.

But the similarities end there. Laura marched into her celebrity, chased it, starting with a six-page Playboy shoot, which she parlayed into regular network TV appearances—and power to her. Kim, a country girl living alone in a trailer near the Mooloolah River, not far from where she grew up, was all but kidnapped by her fame. Those two national titles had put her on a low and comfortable rung, in terms of recognition. But in 1975, the titles joined together with Kim’s job as a “sharkie”—a government-hired killer of sharks; knives and shotguns and buckets of spilled guts all came into play—as well as her being a “striking blonde who is a knockout in a bikini” (as one steamy-lensed newspaper reporter put it, adding “there are those who would want to take a bite out of her besides sharks”), which in turn ran into the global phenomenon of Jaws, then here comes Kim’s invitation to the Smirnoff Pro-Am, the richest pro surfing contest of the season . . . and marketing-wise, well, you’ve got a Hundred-Year Storm on your hands, right there. Fame will have its way.

Smirnoff arranged a promo tour for McKenzie, with stops in New York, LA, and San Francisco. Newspaper and magazine articles followed, each featuring a shot of Kim, astride a dead shark and calmly holding that grinning monster-fish head up toward the camera.

So there’s Kim McKenzie maybe, possibly, briefly knocking Laura Blears off the podium as the most famous surfer of 1975–’76.

Clearly, someone deserving of an Encyclopedia of Surfing page. 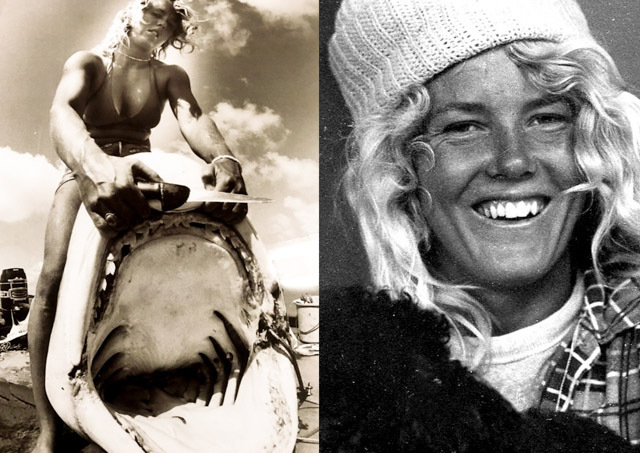 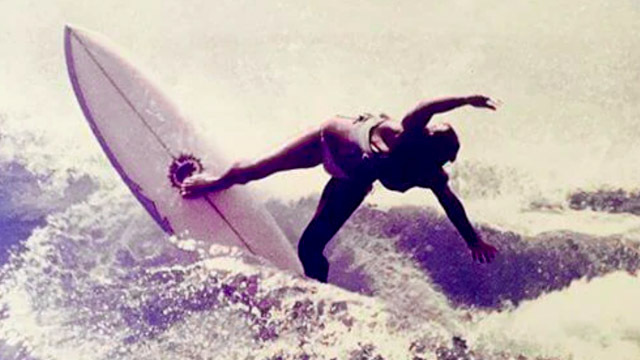 Kim is a relentless Instagramer, so I messaged her and soon received a long choppy emoji-punctuated reply, part of which was about EOS specifically, but mostly a stream-of-consciousness list of grievances about the surf industry in general, and the way it has been forever steeped in sexism and homophobia by “non-sharing white lads who invented control” and “self-made historians who peed over everything.” She wasn’t wrong. But there was more heat there than I wanted to engage with, so I let it go. (Follow @sharkgirlkim. She posts great images, and is often righteously angry but also gracious and appreciative.)

Kim said, in her note to me, “My story has never been told,” which is only partly true. John Grissim profiled McKenzie in 1974, and you can find other, newer features online. I think what Kim means is that she’s never gone public with just how warping it was to live inside the daily four-layer shitstorm of sexism that was Australian surfing in the1960s and ’70s, where women surfers were by and large viewed as something to root, bully, ignore, or make fun of. 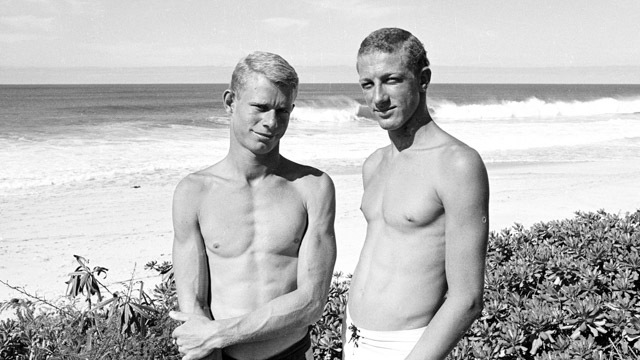 It was done quietly, too, as with Tracks mag competition results where Men’s division winners are listed first, followed by Juniors, Cadets, Kneeboarders, then Women, then Novice.

Occasionally the sexism would be delivered earnestly, almost comically, as was the case with two-time Bells champ Ted Spencer:

With guys who are heavily into [surfing], if they have a steady lady, she definitely comes second. Do you find this to be true?

Yeah, I think so.

How do they accept it?

Well, if they’re still there with their man, they seem to accept it pretty well. It puts them in their place [laughs].

It seems to me in present-day society that the woman is usually in control of the man too much . . . and it shouldn’t be that way.

Have you ever set up house with a lady?

Oh yeah, but not for any length of time.

All of this continued after Kim’s mid-’70s surfing heyday, of course. Here is Derek Hynd’s opening for a 1987 SURFER magazine contest report: “Tom Carroll brutalized Margaret River. He smacked. He whipped. He punished, leaving the wave distraught and ravaged. Carroll’s rape of the river stamped a supremacy, and it must have felt good.”

I’ve never read an uglier lede, at any time, surfing or otherwise, and I’m taking aim here at both Derek and the dipshit editor who approved it.

That editor being me.

Surfing has dug itself into an enormous, decades-deep hole, and we’ve only just started to make amends and pay tribute to female surfers. No single person should be at the front of that line—but there you are, Kim McKenzie. 🦈 ⚡🏄‍♀️ 🙏 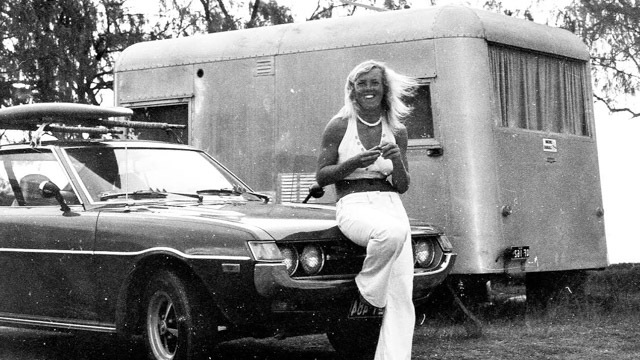