At the end of 1992, when Derek Hynd wrote his annual Top 44 assessment of the just-completed ASP season, here’s what he said about #30 finisher Derek Ho: “He survived, [and] undoubtedly is set to hit top form early this year.” At the bottom of Ho’s paragraph, same as for all the other Top 44 surfers, Hynd dropped his famously curt “World Title” prediction for the year ahead: “Reasonable chance.”

I was impressed that Hynd was able to look at this aging Hawaiian vet (Ho was 28 and had been touring for 11 years) and see what the rest of us could not. Then I looked closer and realized that where I thought it said “World Title,” it actually read “1993 Top 16.” In other words, Hynd figured there was a reasonable chance Ho could fight his way back to the top 16, which implied that there was a reasonable chance he would not. A 1993 world title? As far as Hynd was concerned, the shot wasn’t even on the board. Kelly Slater and his swarming New School gang had arrived. Ho and every other 1980s-vintage pro could slipstream along for another year or two, or drop off now, whatever suited.

Derek Ho, of course, went on to win the 1993 world title. After a good but not spectacular year (no finals; plenty of 3rds, 5ths, and 9ths), he woke up on the last day of competition, at Pipeline, rated #4. Over the next few hours, as surfers ahead were eliminated one by one, Derek saw daylight, rushed forward, took the event—the last win of his career—and at age 29 became Hawaii’s first male pro surfing champion.

Derek died last Friday at age 55. The cause of death has not been released, but Surfline reported earlier today that it was a massive heart attack.

His flying-dagger world title charge that afternoon at Pipeline is what most people are talking about today, and rightly so. But while making this clip of Derek over the weekend, the crown itself seemed ornamental to his larger achievement, which was to take that strutting bantam cock stance of brother Michael Ho, marry it to Gerry Lopez’ flawless French curve line of attack, and then, lastly, neck-bite Tom Carroll and suck out two or three pints of that aggressive steep-and-deep Pipeline mojo. Are three surfers are visible in the way Derek rode Pipeline—yet the end result is purely and originally Derek’s.

“Lightness” isn’t a word you often hear when describing Pipe riders, but is the quality I love most about Derek Ho’s surfing. He was a conjurer; a sleight-of-hand virtuoso. On those huge cantilevered walls, he was balanced and controlled to a point where he seemed to direct the ride by touch, by gesture, not force. He had to, I guess. As a full-grown adult, Derek was 5’4″, 125 pounds. Overpowering Pipe was never an option. So while Tom Carroll, Derek’s Pipe Master friend and nemesis, was all vein-popping muscle and G-force-induced rippling skin as he banked off the bottom, Derek was feathery, almost incorporeal, a koan. Tom powered. Derek raptured. 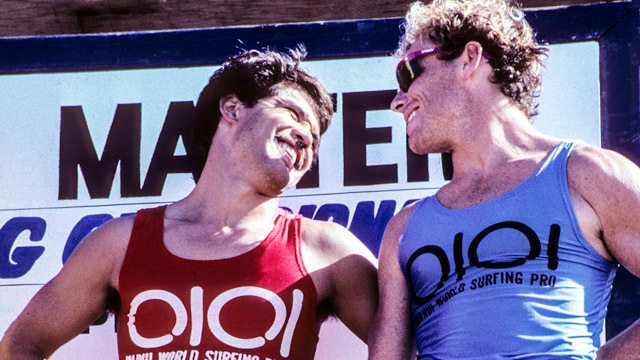 And he was still doing it just a few months ago. In a fairer world, Derek would have had that massive heart attack at the end of this wave and vanished quietly, unseen, into a crack in the reef.

What a beautiful surfer.

My profile on Derek and Michael Ho can be read here.

Click here to read Derek’s Above the Roar interview.

And here’s Derek at the ’85 Allentown wavepool contest; winning the ’84 Duke; dueling Carroll at the ’91 Masters.

Last but not least, click here to watch Derek steal the show in Gotcha’s Waterborn.