The last thing I did before locking down in 2020 was fly to LA to meet my brother Chris in order to get our dad out of the hospital and into home hospice following a stroke. The first thing I did after getting vaccinated was fly to LA to see my brother—which included a lot of talk about our hospice-beating dad, who is back to one-clicking hardcovers from the latest NYT best-seller list, Ubering to Venice for carnitas, and having a glass of wine around the same time as I’m having my final midmorning espresso booster. My dad is 92. Chris, my only sibling, thinks it’s even odds he’ll go to 100, which sounds right.

My first day surfing, fifty-something years ago, was Chris’ first day surfing, too. He was best man at my wedding and vice-versa. We were bedside when our mom died. Milestone birthdays, family vacations, reciprocal “Favorite Uncle” status among our kids—for better or worse (in my case, entirely better), siblings are often the longest and most accurate yardstick by which our lives are measured. 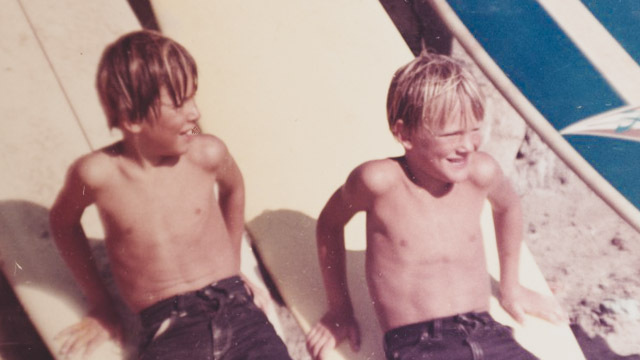 In some ways, this would have been doubly true for the younger Kahanamoku boys in relation to first-born brother and water-sports godhead Duke Paoa Kahinu Mokoe Hulikohola Kahanamoku. Back in mid-March I opened newspapers.com, pulled a thread on Sam Kahanamoku, followed it, and wound up spending an incredible month chasing down articles on all five of the lesser-known Kahanamoku boys—David, Bill, Sam, Louis, and Sarge. Throughout, I kept wondering how it must have felt to have your own life so defined, publicly at least, by a famous sibling. A 1922 LA Times article headlined “Kahanamoku’s Brother Arrives” opens with “William Kahanamoku, brother of Duke Kahanamoku, famous Hawaiian swimmer, is visiting Long Beach. Duke’s brother will remain in Southern California for several weeks.” Every Kahanamoku obituary mentions Duke in the first sentence.

My impression, built from nothing more than a few promo shots of the six brothers lined up in a row on the beach at Waikiki, is that Duke not only went out and gathered up all the achievements, but lived a fascinating globe-trotting life while the others stayed home playing uke and surfing and doing beachboys things. And true, Duke ranged further, met more people, was more shaped by forces outside of Hawaii than his siblings. But did his outrageous level of fame translate to a more colorful or deeply-experienced life? Two months ago I would have said yes, but now I don’t know. The younger Kahanamokus loved Brother Duke and cheered him on, sure. But they were out there living their own lives, and in fact most of them seem to have had a well-above-average knack for adventure, success, failure, even a bit of scandal. Fate no doubt bent their way because of the famous last name. But Duke himself wasn’t pulling anybody’s strings or sitting on any shoulders. For that matter, there was a 15-year period during the 1910s and ’20s where Duke was away from Hawaii altogether. 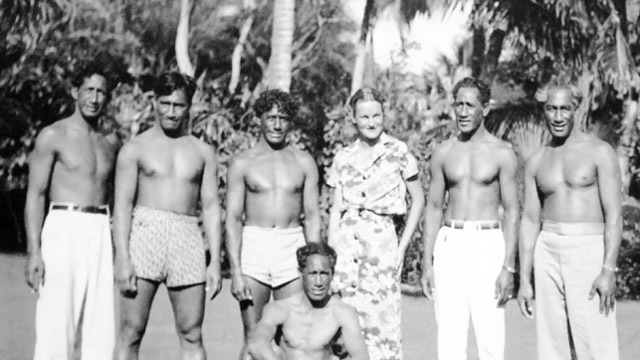 This Kahanamoku foray was the longest bit of focused research I’ve done since EOS launched, and I loved it, but I barely scratched the surface. Even so, it was satisfying to find that the boys’ lives were rougher and messier and funnier than what turns up in all the Kahanamoku biographies. We are probably past the point where somebody will take the time to do a fully and lovingly unsanitized book or documentary of Duke’s life and times—with family members used not as props, but as people who were cried to, ridiculed, eye-rolled, hit up for a loan, ignored, put out and taken back in, crisscrossing the storyline at regular intervals. Should that writer or filmmaker ever get in touch with me, however, I will say to her . . . .

Start with this overview, which I have cleverly titled “Beaucoup Kahanamoku.”

Then move on to this 1923 article. Sam, not Duke, was the best surfer in the family? 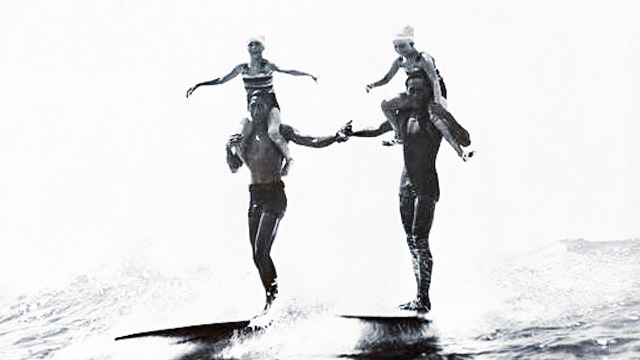 What was the beachboy reputation like [back in the 1930s]?

Kind of scum of the earth. It was bad. Everybody say, “Eh, you a beachboy.” But look what happened! They get a rock band now, call ’em Beach Boys, they got everything.

Sort of a detour, but this 1921 Star-Bulletin article describes a new life-sized statue of David Kahanamoku, which would soon make its way to the International Eugenics Congress in New York. The piece is both uncomfortable (eugenics being Hitler’s scientific happy place) and complimentary. “The cast of David shows to excellent advantage the splendid muscular development of the upper body that results from constant surf-riding,” the sculptor notes. “David’s development in the arms and shoulders and chest is nothing short of remarkable.” 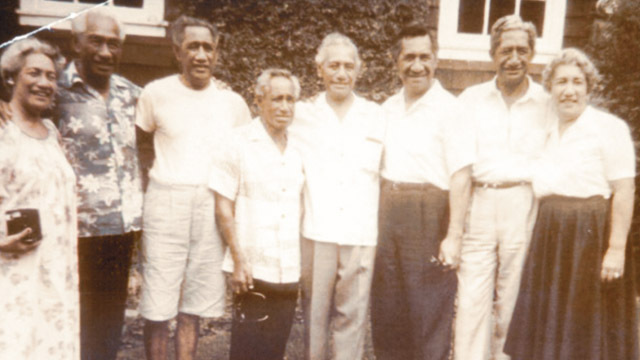 There is more. Get in there. Click something and keep going. See if you believe, as I do, that Sam fathered not one but two kids that were long believed to be Duke’s offspring. Read about how Bill took a flying discus to the back of the head during track practice. See if your heart doesn’t break a little there at the very end, in 1994, when Louis died and the Star-Bulletin headline read: “Last Kahanamoku Brother was Duke’s Favorite.” I appreciate the honesty, but it seems kind of cruel to the other brothers’ families?

Chris, you will 100% always be my favorite brother.