We think of Pam Burridge as being one of those late-career half-geezer world champions, like Joel Parkinson or Sunny Garcia, but in fact Pam was just 25 in 1990 when she won her first and only world title. Margo Oberg was an older champ than Burridge. So was Phyllis O’Donell. On paper at least, Pam was still young in 1990.

Then again, she’d been a pro for 10 years—and they were hard years, too, at times, with Pam falling or diving into every pothole you can imagine, including, but not limited to, drugs, depression, and anorexia. Marian Stell’s excellent 1992 biography on Pam details all of the highs and lows, and DC Green’s 1998 profile, published the year Burridge retired, does much the same but in a looser voice, and before we dive into the uniquely high-low road Pam traveled in 1984 I’d like to quote a bit from Green’s article:

Pam’s longevity defies description or comparison. At the end of this year, she will have racked up her 15th Top Eight slot, an achievement unmatched by any man or woman surfer anywhere, ever. She’s come third in the world four times, second a staggering six times, and was world champion once—bittersweetly, unforgettably—by a record margin over Wendy Botha in 1990.

But burn the record books, I say, with their lies, damned lies, and statistics. Pam was the first Australian woman to become a genuine pro surfer, and she blazed a path in our male-dominated sport so inspirationally that Aussie women now dominate the ratings. She grew up in the public eye with an anvil of media expectations upon her so heavy it would have crushed a lesser mortal. Pam not only survived, she triumphed. If women’s surfing—nay, Australian surfing; nay, the entire WORLD of surfing—has produced a single worthy role model in the modern era, it surely must be this still-super-stoked surfer, this one so humble I can picture her now, grimacing as she reads these words.

Green was not joking, by the way, about the “anvil of expectations.” Read this short Sydney Sun-Herald article in which Burridge is first described as the “best female surfboard rider in Australia,” and then touted by her mother as “a potential world champion.” 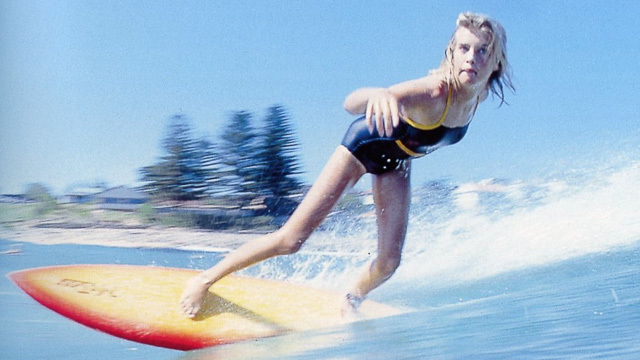 Three years later she lost the world title to Debbie Beacham by a mere 40 points, and I’m not 100% sure, but that may be the closest finish in pro tour history, male or female. A year after that, near the end, just as Pam pulled down a big win at Cronulla, the final two women’s events of the year were suddenly dropped from the schedule—leaving Pam stuck at #3 for the year, without a major sponsor, and just pretty much sick of the whole thing.

Which brings us to 1984. Burridge does not mince words when talking about how burned out she was. “I was very anti-surfing at that stage of my life,” she told Stell. “I didn’t want to be called a surfer.” In another interview, Pam said she “hated everything about surfing except surfing.” 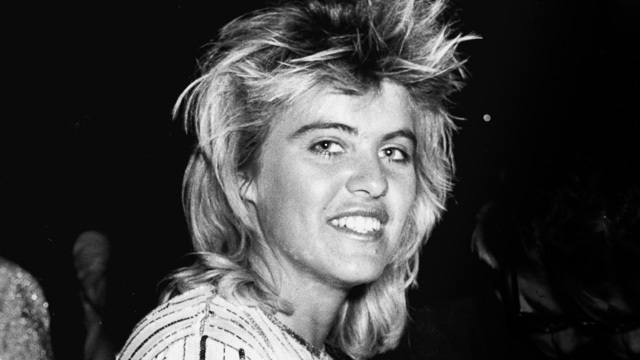 This was the beginning of her short but intense King’s Cross nightclub period, which may not have been as hard rocking and alcohol-soaked as legend would have it, but was nonetheless—and very much intentionally—well removed from the surfing world. Mostly it was, anyway. Pam didn’t pull a Shane Herring. She surfed almost daily, for starters. More impressively, she ran an extension cord from the nightclub to her pro career. Damien Lovelock, the louche and extremely handsome singer for a Northern Beaches band called the Celibate Rifles, was Burridges’s new boyfriend, and it was Lovelock’s idea to raise Pam’s profile, and thus bait potential sponsors, by having her cut a record and make a video. “Summertime All ’Round the World,” a surfy bit of New Wave bubblegum written by Lovelock and recorded by Pam and the Pashions—Burridge and a handful of excellent Sydney-area musicians—came out in September, and the accompanying video was shot and directed by soon-to-be director to the stars Keir McFarlane. 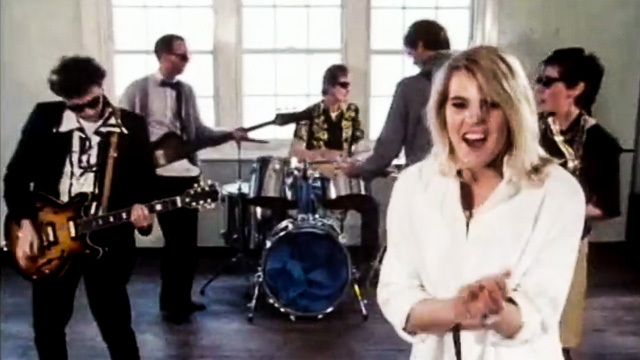 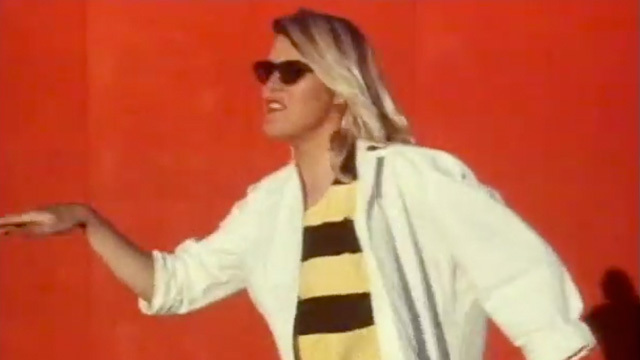 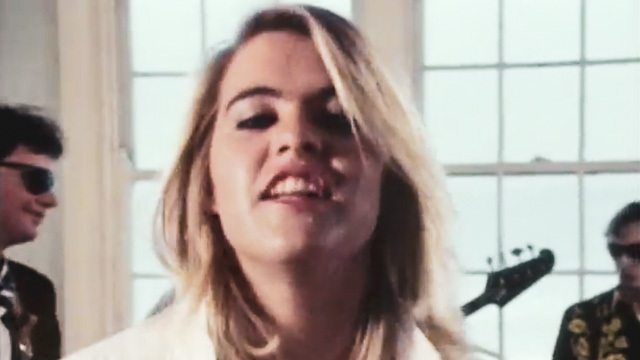 The whole thing was sort of a joke, but not really. Lovelock was as ambitious as he was good-looking, and if “Summertime” began as a romantic gesture to his dazzling new girlfriend, it was nonetheless meant to perform in the marketplace. It did not. “Summertime” never got within a mile of the charts. Five hundred copies were pressed, and there was no second run.

But the media, as Lovelock predicted, absolutely swarmed Burridge the moment the song dropped, and here is where the story takes an interesting turn. For all that 1984 is presented as a dark period in Pam’s life, and it was, she’s clearly having a great time in the video, which in turn set up a feature segment on a kid’s TV show called Simon Townsend’s Wonderworld, and my personal favorite part is when Pam comes onscreen for the first time. It took two or three viewings before I realize that she’s mimicking the guy interviewing her, which looks to me like a good-natured dig on Pam’s part. I also liked the part where she drops into a tubestance while standing on her board on the beach, dancing to “Summertime All ’Round the World.” 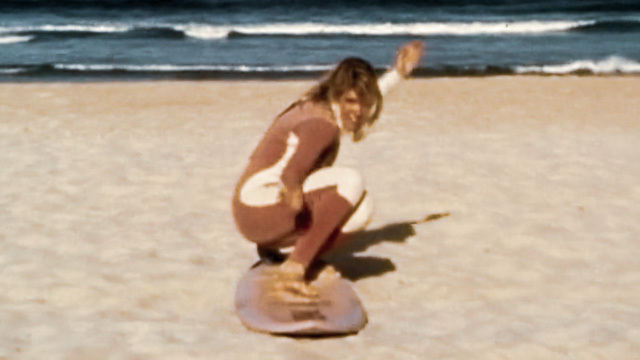 Am I overselling? Maybe, yeah. I’m as taken with Pam as DC Green and everybody else is, and perhaps I’m looking for silver linings here in what she herself has written off as a mostly shitty year in her life.

On the other hand, there she was on TV singing and dancing and smiling, and if Pam rocked up to a few contests that year hungover with cigarette smoke in her hair, she was by no means going through the motions—in fact she won the season opener, made the semis more often than not, and finished the year, again, at #3.

Five years would pass before Burridge, detoxed and committed, pulled down that world title. Pam has said, and I don’t think for a moment spinning herself or us—that a championship earlier in her career would have been wasted on her (sun’s out puns out), and that the one title was all she needed. SURFER would later call Pam “Mother Superior” not for her competitive achievements, although they were mountainous when added up, but for the fact that she’d surfed, laughed, staggered, and recovered her way through late childhood and early adulthood to emerge not just unbroken but as a plain-spoken fire-tempered crinkly-eyed surfing immortal. 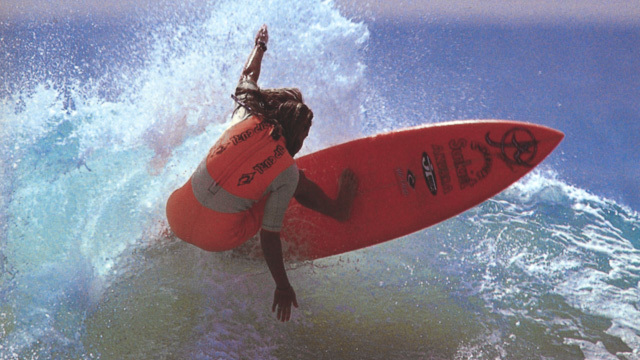 PS: I just realized “Celibate Rifles” is a funny and very Aussie piss-take on “Sex Pistols.”

PPS: Around 1990, Pam listed the Divinyls as her one of her favorite bands. Turns out that Divinyls’ singer Chrissy Amphlett, the toothsome black-haired bombshell whose autoerotic performance in “I Touch Myself” spurted the track all the way to #1, was first cousins with Bondi’s Little Pattie, who hit the charts in ’63 with “He’s My Blond-Headed, Stompie Wompie, Real Gone Surfer Boy”—and guess how old Pattie was when “Stompie Wompie” blew up? Fourteen! Same age as Pam when her mom put the “future world champion” hoodoo on her, and I don’t know how it happened, people, but we have gone full circle.