Ten years ago, somebody who knows the small business game way better than I do advised strongly against what he called “mission creep.” Stay focused on one thing. Do that thing well. I nodded firmly in agreement, and went back to work on what was then, concept-wise, the simplest of missions—migrate the Encyclopedia of Surfing from book to website.

Technically speaking, the mission never crept up on me. No, it was invited, escorted, and given a key to the EOS gym. Mission creep became my brand. EOS mission creep is in fact proudly color-coded: Red for History of Surfing, Yellow for Interviews, Green for Contests, Blue for Video, Purple for Surfboards, and Beige (I know, we dropped the ball there color-wise) for Blog and Sunday Joint.

All of these areas, I believe, very much belong under the EOS umbrella. But one of them is neglected, and let’s talk a little about Surfboards. If you haven’t already done so, click the purple triangle in the upper right corner of the Surfboards homepage, and you’ll notice that while this area has been live for two-plus years, I’ve posted only nine boards, which isn’t just embarrassing but Coach-level embarrassing.

I apologize for not doing a better job, and promise to add more boards in 2022. But on the upside, the Boards area, size-challenged though it may be, is a honeypot for equipment geeks and surf history lovers alike. Click any of the boards and you won’t go wrong, but here are three of my favorites. 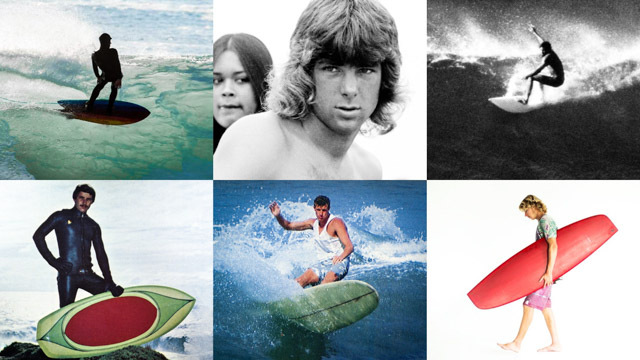 Magic Sam, the board Nat Young rode to victory in the 1966 World Championships in San Diego, is familiar to you old salts. You may even know that Nat never again saw Sam after the big win at Ocean Beach. What I did not know until just recently was how long they were paired up before San Diego. Nat shaped Sam at the Gordon Woods factory after returning from the ’65-’66 winter season in Hawaii (likely the second half of January ’66 but possibly early February), and the World Championships ended on October 4. Sam was the only board Nat had during that eight-month period. He rode it to wins in both the State and National Titles, as well as Bells, and by the time San Diego rolled around the board looked as old and yellow as Steve Buscemi’s teeth. 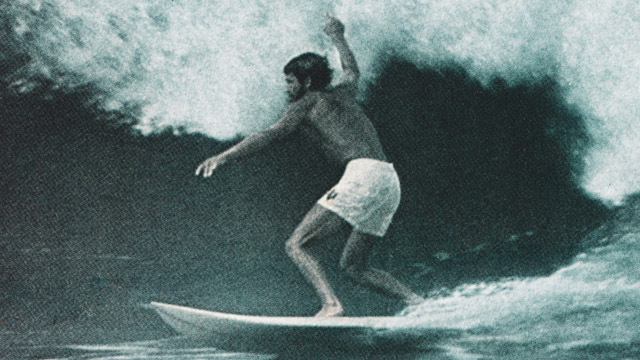 Joey Cabell’s 1969 White Ghost is the second-most unrideable surfcraft of all time for mere mortals, in between Slater’s “glass slipper” and a coffee table. The Ghost was four inches thick, with knife-hard down rails and a bottom flat enough to shoot pool on. Cabell made it work because he surfed like Zeus, but nobody else wanted anything to do with his surfboard-canoe hybrids. I once talked to Mike Doyle about it.

Was Cabell going faster than everybody else because of those boards?

The White Ghost . . . yeah, probably. He got into those really thick boards, super hard edges, super floaty, really light, edgy and catchy. He could handle those boards. I never could have.

What do you mean?

I like to put a lot of power into a turn; I like to sink the rail. These boards Joey rode—he’d just be skimming along.

He didn’t want to sink a rail?

No, that wasn’t Joey’s thing. Especially not with those thick boards. But even before that, he was always kind of a skimming-type of surfer. He’d get into the wave really early, from way back. No late takeoffs. He’d get in early, pull up and run the high line. That was his thing. But I don’t want to sound like he was a pussy, because he was incredible. He’d be standing up, on an angle, planing, while the rest of us were still paddling for the wave. At Sunset, he’d come from so far back behind the rest of us, it was amazing. He just had a whole different approach to surfing.

The “skimming” style Doyle refers to was called “speed surfing,” and it was quite the rage in 1969—even though, as far as I can tell, it had no practical meaning beyond a slight narrowing of the stance. Read this happy-babble 1969 Dru Harrison article on speed surfing and watch the second half of this Dru Harrison video, and see if you don’t agree with me that, one, Harrison is deluded with regards to speed surfing, and two, he is also among the smoothest and most overlooked first-generation shortboarders. Style for days. A tiger on Vaseline, as Bowie wrote after watching Dru surf Honolua Bay. 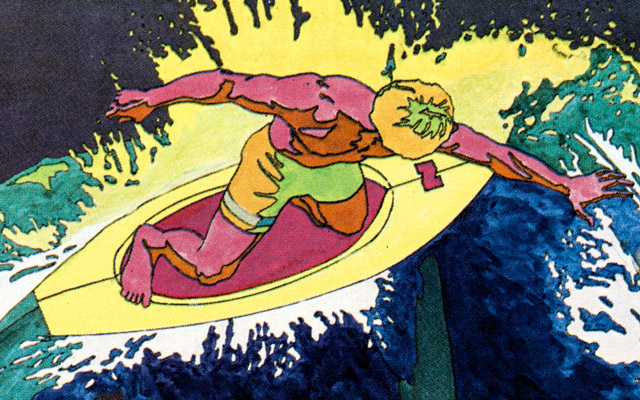 The Shoe, by Newport Paipo, on the other hand, was people-friendly and a huge missed opportunity. The Shoe was small and wide, and could be ridden as a single, twin, or tri-fin. It came with a no-slip neoprene deck patch, which was basically Astrodeck five years before Astrodeck was invented. In my earliest gremmiehood, the two in-person surfers who blew my young mind hardest were J Riddle, doing 360s at Malibu on his long narrow Natural Progression, and Larry Sheflo, also at Malibu, low and crouched on his tiny five-foot-long orange Shoe, tracking high in the pocket and covering more distance on his way down First Point than anybody. Why this board didn’t catch on will always be a mystery to me. If we had embraced the Shoe (and by “we” I mean zombie-minded California surfers who spent the early 1970s buying gunned-out boards like we were charging 12-foot Sunset Beach instead of Bay Street windswell) America would have advanced to the Ryan Burch level of surfboard consciousness ten years before we did.

Although for the record let it be noted that a 16-inch-wide pintail spear fit snugly under the arm of a 5th-grader, and the Shoe did not.