My first brush with Hare Krishnas, common to Los Angeles-born people of my age, was seeing them at the airport in the early 1970s, bald-headed and saffron-robed, dancing and chanting and banging drums. This was just after the Manson murders and the Krishnas were bad-vibed by almost everybody for being cult-adjacent—which at the time they kinda were, as the movement was attracting plenty of teenage runaways.

My most recent brush with Krishnas, and maybe yours too, was at the beginning of the last year’s Get Back Beatles documentary, when a single spooky-looking disciple sitting against a wall at Twickenham Studios divides into two and moves a few feet closer to the lads, at which point I wanted security to quietly but forcefully escort them both out.

My favorite brush with Krishnas came in the late 1980s when a friend from Laguna Beach turned me on to the all-welcome Feast Night at the local temple. As I recall, everybody, believers and non, had to chant for 15 minutes, then it was gangway for the steam tables at the back of the room loaded down with veggie dishes that tasted like Vishnu himself was slinging in the kitchen. Donations encouraged but not required.

Krishna and surfing came together in a big way just once—when Ted Spencer left the sport at the height of his career to became an all-in devotee, robes and everything.

Spencer was never given the attention he deserved here in America. For a short period in Australia, though—let’s say a year or two either side of 1970—he was arguably the nation’s most popular surfer. Spencer, a Sydney-born regularfooter with two Bells wins to his credit (’68 and ’68), surfed like Nat Young inhabiting the body of Dru Harrison while fantasizing about Jeff Hakman. He was short and powerful with hydraulic pumps hidden inside his stumpy legs. He was also rock-god handsome—enough to inspire a teenybopper cheer squad at the Bells contest, that followed Ted down the beach before his heats and deposited him into the shorebreak with a headful of pride and embarrassment. 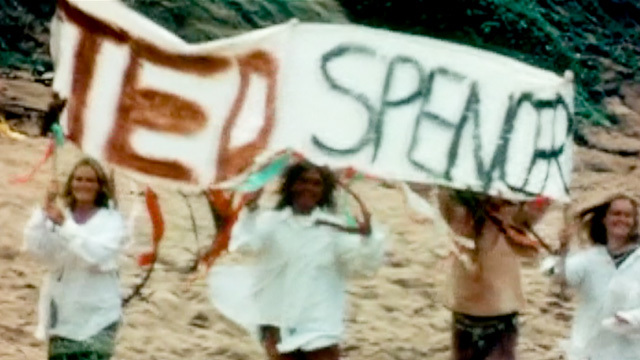 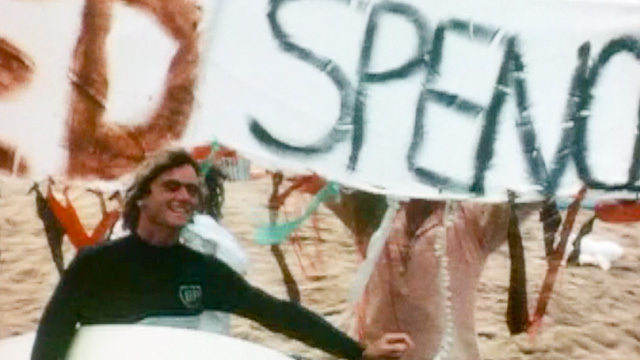 Spencer flew to Oahu at the end of 1967, then island-hopped to Maui with Nat Young, Bob McTavish, George Greenough, and filmmaker Paul Witzig, and footage from their trip made up the last section of Witzig’s soon-to-be-released Hot Generation. Young and McTavish, of course, rode their deep-vee plastic machines to shortboard revolution fame at Honolua Bay. Spencer is not featured in that final glory section—the last we see of him, Ted is walking up the beach somewhere in Maui with a broken board. What is really interesting here, though, and I never noticed it until this week, is that the board Spencer rides in Hawaii—an 8′ 4″ x 23″ roundpin nicknamed Little Red—is a post-deep-vee design. In other words, while us Yanks were all still on 9′ 6″ noseriders and about to collectively lose our shit over those clunky fat-backed deep-vee boards, Spencer had already been there, done that, and moved on. If you’ve got Hot Generation on the hard drive, watch and see. Nat and Bob absolutely get the best waves in that final section at Honolua, no question. But Little Red is a clearly superior board to the plastic machines. Ted, arguably, is the real advance-man here, as much or more so than Nat and Bob. 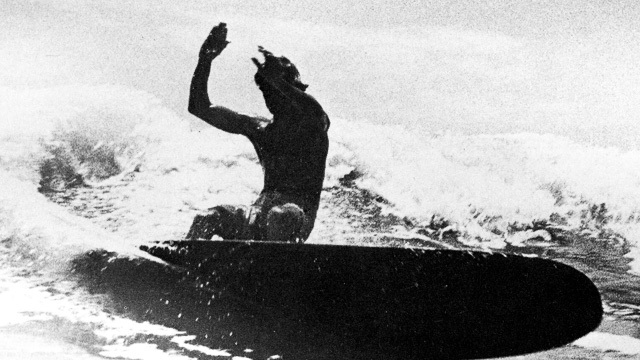 Spencer was featured in Witzig’s next two movies. Wayne Lynch shades him pretty hard in Evolution, but Ted’s star lights up in 1971’s Sea of Joy, as he rides a tiny little snub-nosed chip of a board in gorgeous blue tubes at Angourie.

It was around that time that Spencer found Krishna. He more or less dropped out of sight for two years and lived briefly in a temple in Melbourne. “It was a slow transformation for Ted,” Nat Young later wrote. “[But when] the conversion was complete, I thought he looked great with his shaved head and saffron robes. I recall chanting with him on occasion and feeling this incredible love.”

Spencer made his public reentry to surfing with a 1974 Tracks interview, and it is one of the oddest surf articles you will ever read. There is nothing brainwashed about Ted. While still very much a practicing Krishna, he does not proselytize or preach. The saffron robes are gone. In fact, Spencer, 25 at the time, is shown wearing aviator shades and a collared shirt, and my admittedly untrained eye tells me that is a professionally-styled David Cassidy shag haircut. 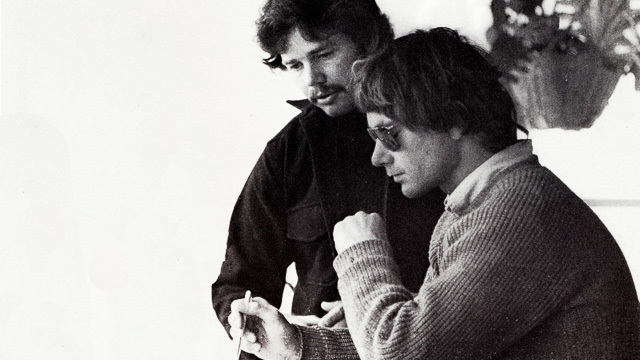 No, the odd part of the Tracks interview is how all-over-the-place he is. Looking back on his career, Spencer’s take on being young and famous—surf celebrity was at that point a relatively new thing, but already a very big deal in Australia—is remarkable, and I’ll quote at length:

You became a star.

What was your image?

I don’t know. I was just being taken along by the tide, without having much understanding or much control over my direction.

I recall hearing someone describe you in those days as one of the up-and-coming young animals among surf stars.

I guess that was it, yeah. It was definitely cool to be an animal (laughs). But I never made it to the top of the animal pile. I didn’t have it in me. It created an era in Australian surfing which, looking back, was really pretty gross. People were running over everybody else and nobody really cared about anybody. It was an animal period; a very selfish period.

Spencer then veers into some pretty left-field comments about women (“in present-day society, the woman usually is in control of the man”), Nat Young (“I was disillusioned by the surf star who was supposed to be God, who was set up as God, and who didn’t fulfill that position), and surfboards (Tracks: “How many boards do you have?” Spencer: “None. Ha!”)

The interview ends with a quote that, fairly or not, has been propped up in front of Ted Spencer’s life like a billboard: “When I surf, I dance for Krishna.”

Spencer dropped off the surf scene again, not long after the Tracks interview, and has politely remained out of the public eye ever since. He moved to Hawaii and from what I hear (although none of my online searches have confirmed) made a career in real estate sales. One person I reached out to paddled out to Number Three’s, just before Covid hit, and found Ted already in the lineup—looking and surfing well.

PS: Tracks: “Do you ever chant Om?” Spencer: “Yes, but it’s not what I’m doing now. I’ve always looked at Om as the dial tone of the universe.” 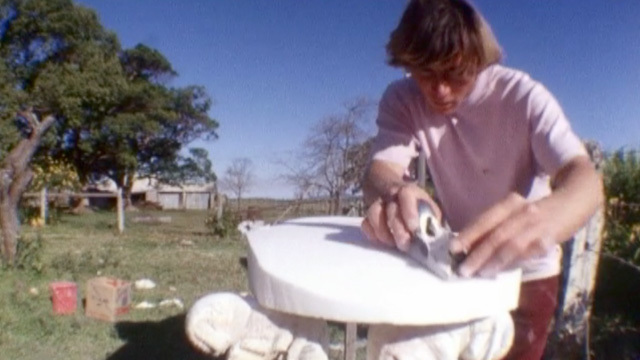 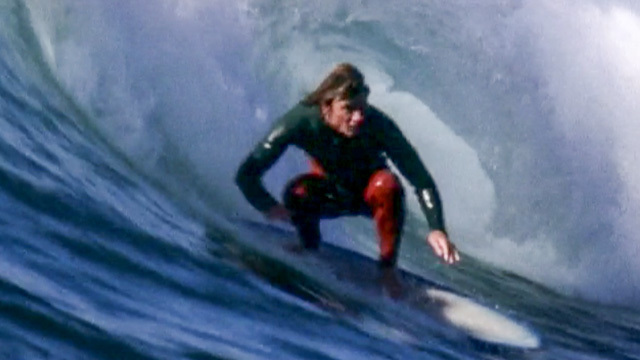 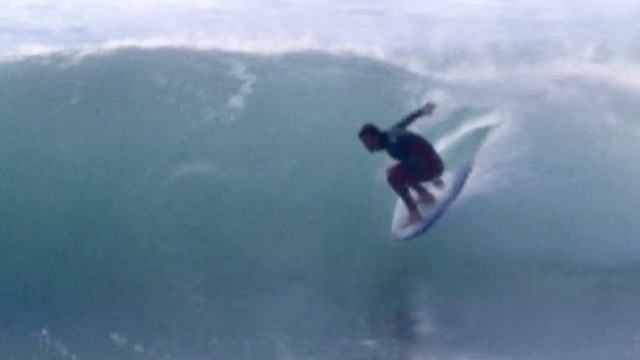 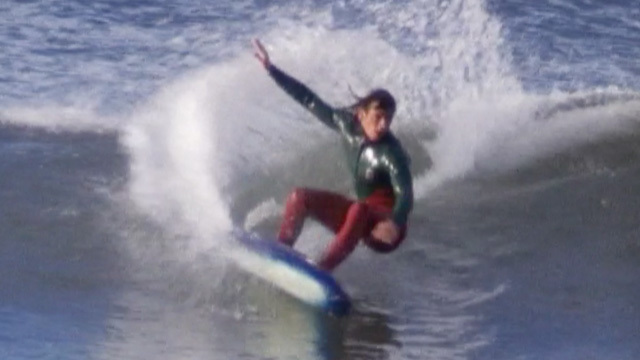